For the past year I've been pretty much a grouch.  I think one day I figured out my Life Crisis Points for that time and it amounted to almost 500 points.  A lessor person would be pushing daisies, but I'm too ornery. A letter has been writing itself in my mind every morning as I awake for the past 7 months.  I tried to temper it, edit out the vitriol, but the next morning, just like Groundhog's Day, it's back again.  Well, I finally papered and sent it.  The relief is strictly in my own mind as often happens, because the 'writee' is self-absorbed, and when blind-sided by the truth, their usual reaction is "Who Me?"  My family has been known to sit around the table while I read past letters that I've composed and sent, starting with the guy who said he "wasn't a crook."  By the end of a session the table is usually laughing and crying, and incredulous that I have the kahuna equivalent to actually send them.  I didn't say I was smart, just right!

I just finished a book on tape called, Saving CeCe Honeycutt. For giggles, I looked up my library card just now and saw that since 9-28-09, I took out 857 books, videos, books on tape, toys (yes, the library lends toys) and CD's.  That's a crap-load of education.  Not saying I read every single one.  Sometimes the 1st paragraph tells me it isn't a winner, but, if I didn't read past page 97 of Steig Larson's Girl With the Dragon Tattoo, I would have missed a heck of a good read. Likewise, the City of Thieves.  In Saving CeCe, this young girl who has been dealt a horrible life, digs in and her best life evolves.  She finds herself "accidentally happy."  I'm getting there.... 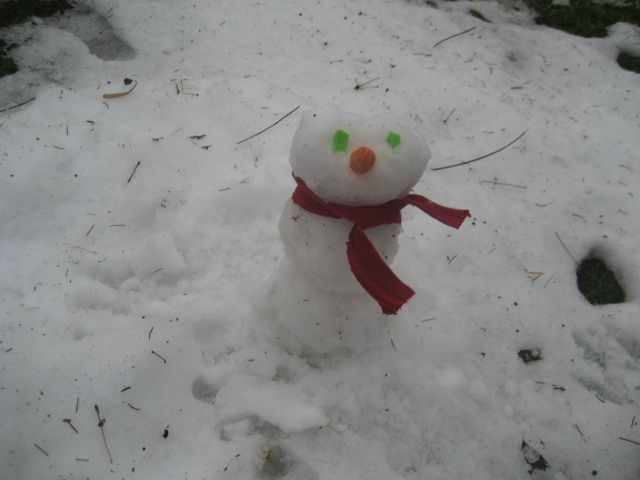 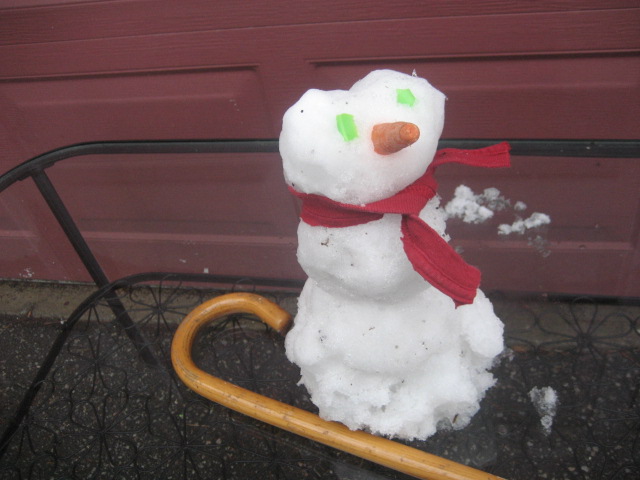 I know I've been AWOL for a week, mostly finishing up some projects, planning others, being a C'list scavenger for people, digging out from the flood, writing letters, making an 8" snowman, and doing a lot of #4.  Well, I'm back, not pain-free, but back.

I made this charming little guy yesterday and today he was gone.  Just like Frosty.

Tomorrow, I will have a pretty decent post. Check back.  I promise.