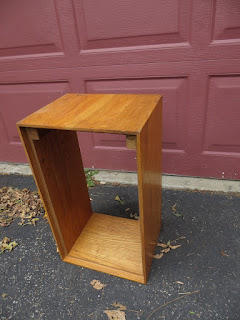 This discarded, old oak box with neither top nor bottom was given to me by my friend, Ken. [You are always in my prayers] He rescued it from the Mall of Potential Dreams, aka, the curb.

Well, Grandson Liam just graduated from high school and is already playing college soccer. I had no bucks for a gift so this became "it". I call it The Nationality Box. A wooden flag representing his heritage would be created, nailed and painted to each side, and an old bi-fold door aging in the yard would become the flooring. Casters are attached on the bottom. 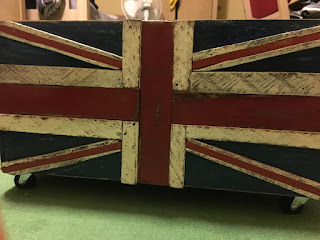 [These next photos are taken in his dorm room and filled with supplies that his mother gave him, not me.] 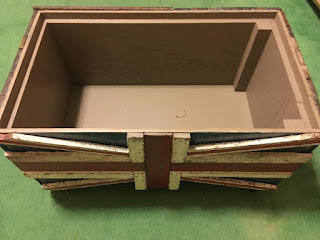 We are a melting pot of nationalities in our family, so I started off with the most of what he is. British. He made a visit to his Nana and Grandad in Liverpool this June. As you can see it is not to scale and slivers of wood cut on angles are a cautionary tale while using a compound mitre saw. I can see how a thinking person would consider safety glasses and clamps to be a wise option. #*@^&+# 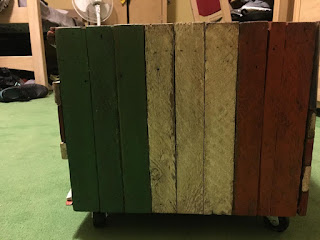 Ireland came next as an easy choice and our family's most celebrated country. For decades we've attended the parade together, and even named one of our characters after its patron saint. I made about a hundred flag pins for all to wear any time of year. If people stop and ask about them I dig through my purse or give them the one off of my green sweater.

The next choice was obvious, the German flag, BUT.... I was listening to a book on tape called The Lilac Girls as I worked on it. It is a fictionalized story of true events about the young Polish girls that were held captive at Ravensbruck during the Holocaust. The Reich would surgically implant all manner of rusty, disease ridden objects into these girls legs without antibiotics, and let them fester until their "project" was completed. These "rabbits" as they were referred to, ended up crippled, and/or killed at the shooting wall. I had already painted the yellow, red and black on the lath-boards and attached them to the box's opposite end.

I was conflicted. While modern day Germany does not resemble Germany during WWII, I could not say the book did not have an impact on me. The German flag had to go. 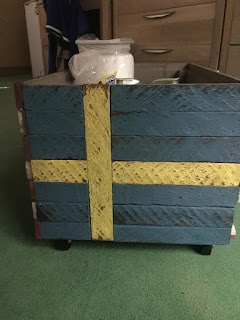 The day the order was issued to eradicate the surviving "rabbits", The Swedish Red Cross, notified through secret letters written in urine, descended on the camp and loaded the girls into their truck and to safety. The girls later made their way to the United States for corrective surgery and counseling.

Happily, we are also Swedish! [Symbolically, I cut through the horizontal line of the German flag and added the vertical board to create the Swedish flag in blue and yellow.] 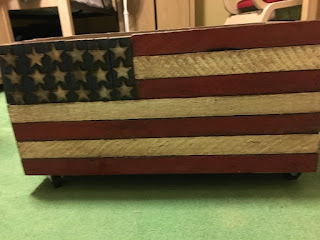 Which brings us to the GREATEST COUNTRY, the United States of America, that our ancestors, at tremendous sacrifices, chose to raise families and make this land our home. Our greatness is in our legacy, our children, who learn from their histories and make us proud.

PS [Disclaimer: No endorsement has been made in regards to the nation's highest office. Because of the un-relatability to any of the candidates' mettle, I may have to, on the day of election, resort to a stiff drink, and Eeny Meeny, Miney, Mo].