Anyone that has seen my dining room can attest to the fact that it not typical. It is filled with functioning sanders, drills, rolling carts, cans of paint and a compound mitre saw. A few weeks ago, under the guise of "cleaning", an old wood, wood box got stacked next to a slender window I was turning into a chalkboard. Screeeeeeech! A chocolate and peanut butter moment! 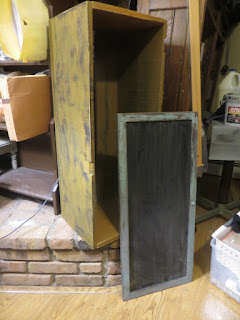 In my mind, by building up the base, framing the box, adding a crown and attaching some hinges I believe I am staring at the makings of a mini British phone booth. I never really built a cabinet before. I can embellish a ready-built, but to create something from scratch that has style and substance? This was not going to be your father's "Oldsmobuick."

If you've ever followed Catherine at Freddie and Petunia, now SHE CAN BUILD A CABINET. 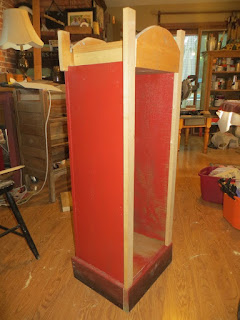 After building a 2x4 base and attaching the old wood box (once used for firewood), I started cladding it with trim wood and lattice to make it look more substantial and give it surface when it was time to mount the door. My only expenses were 2 hinges and a magnet closure. About $6.00. 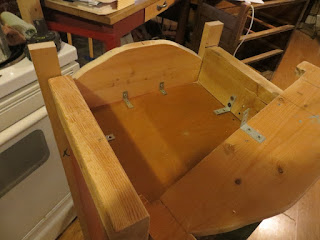 The only real challenge was how to build a believable arch that gave the illusion of a British phone box. I considered papier-mache` or chicken wiring a frame and applying fiberglass. That was a for sure "no", as "I don't know nothin' 'bout birthin' fiberglass." I ended up making a half circle with my potato salad bowl (I knew in high school a compass was never going to be useful in my life) and dug around in my "pail o' metal parts" for some semi matching "L" brackets. 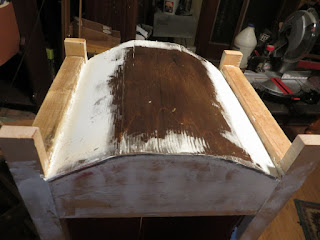 After dampening some scrap Habitat wood that I bent, I brad nailed it with my Ryobi Air Strike. After using my "go-to" hole filler, Bondo, it was ready for sanding and an undercoat of my favorite brown paint....a quart of $2.00 HD OOOPS paint (already on hand). An elf must keep filling that can up because it never empties. 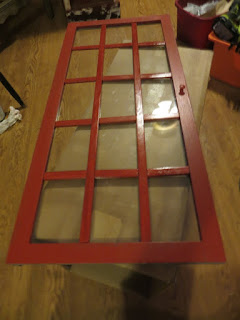 After scraping the black chalk board paint off the window, I measured strips of door screen trim and cut to act as muntins. My only goal was to have two of the horizontal muntins cover the shelves I would add to make it a book case. 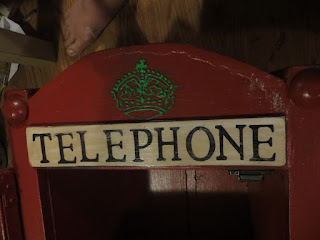 I am not a Cricut or Silhouette owner so, my TELEPHONE letters are free handed. As my computer does not read my printer I had to take a picture of a Google image of the crown logo and then draw it on the wood. To give it texture I dropped pellets of Elmer's Glue on top of the design and when it dried painted and gilded it. (Yes, those are my little piggies. No polish-this is not the beach.)

Unfortunately, the first time I tried it, it was off center so I stripped and scraped and sanded and drew and painted again. This time I used a puff paint instead of the glue. Much better result and it dried faster and stiffer. I should have reversed the photos, but I am yawning and tonight is not my night. [Story involves a "VMW"* that had been running for less than 24 hours (now expired again), a dead raccoon, and 2 police cars] 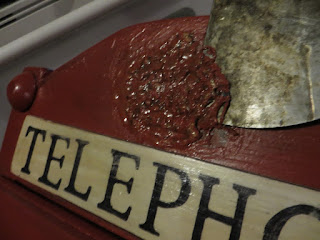 I wish I had a really good photo of the finished book case filled with Harry Potter books, and a Quiddich broom leaning beside it, but it is what it is....a little idea that evolved when 2 foreign objects happened to touch. 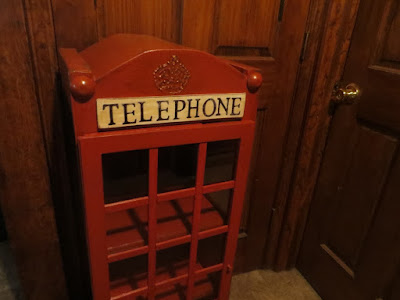 Working on my staging room right now. Next posting will have a cleaner background. 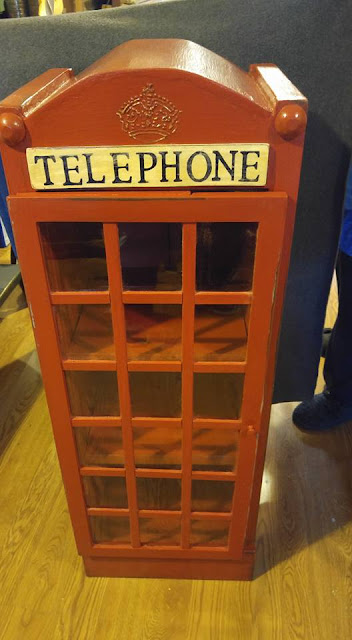 People keep asking if this will become a Tardis? I say, "Them's that owns it, gets to name it." The new owner is keeping it "RED". WHO is the new owner? Not a doctor, that's who.

As ever,
La Verne
hopeandsalvage