And the winner is...

Practically all the online news services or newspapers are strangling viewers with the words, 2013 Year in Review. Not enough daily news that the old stuff has to be regurgitated? Who cares? Life is way too short for a read-over, unless it's Too Kill a Mockingbird, or the 10th reading of "How to install and lock-in the bench seat in a Grand Caravan." I'll have no year in review of my blog. Not the highlights, low-lights or hind-sights. I will however, dabble in what I think should be the 2014 Word/s of the Year for me.

The words in competition so far, are: Simple, Patience, Follow-through, Forgiveness, Heal, and Hope.


These past two weeks I've been doing some thinking about Jesus and Lazarus, two guys who have had documentation on showing up back from the dead. I was close, but then you need people to certify that you actually were dead and came back, not that you just felt like you were dead. I must have been though, because no painting was done, no saws or drills fired up, no furniture carried in or out, and I never even checked to see that my drill batteries were plugged in. I did, however, cough-a-lot, sleep-a-lot, drink-a-lot, make fires, sit in front of a heater, stay in my jammies and hardly leave the house. It was wonderful and terrible. The wonderful part was that nobody bothered me. The terrible part was that nobody bothered me.

I humbly wish all of you a better year than last, but not so good that you don't look forward to the future. We have to keep remembering that for all our good fortune, this isn't heaven.

And the winner is...

AS EVER
La Verne
hope&salvage
No comments:

Here is mom, Jen at the Cookie Bake on Saturday, probably the last photo of Alaina incognito. 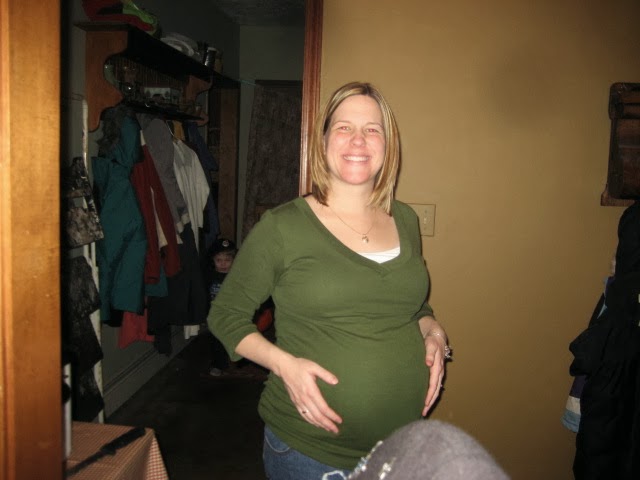 She is precious (my nose), brown hair, nice disposition, long fingers and close cropped ears. See for yourself. This isn't the official photo, just a good unwrapped version with the nurse. 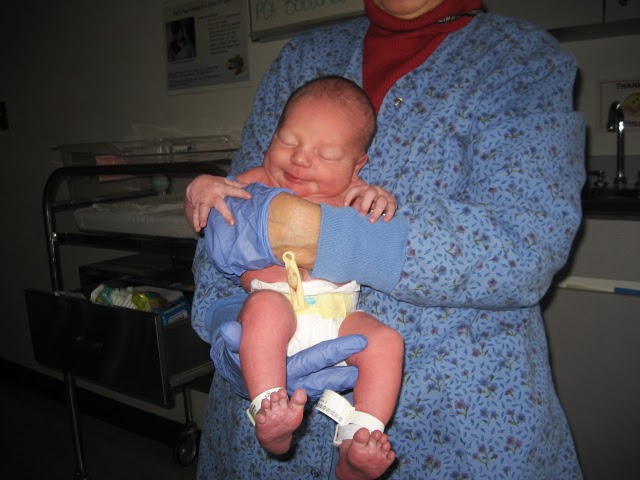 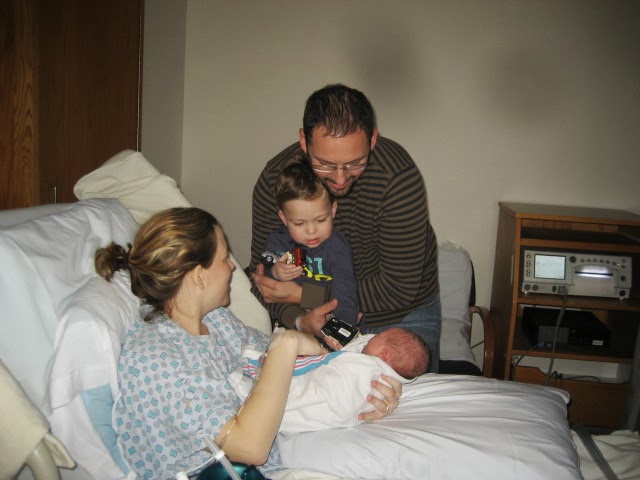 Jake getting a first look at his sister, said, "Is that Baby Hayes?" That is his new baby cousin, and just reinforces the old adage that all babies look alike. [well, our babies kinda do] 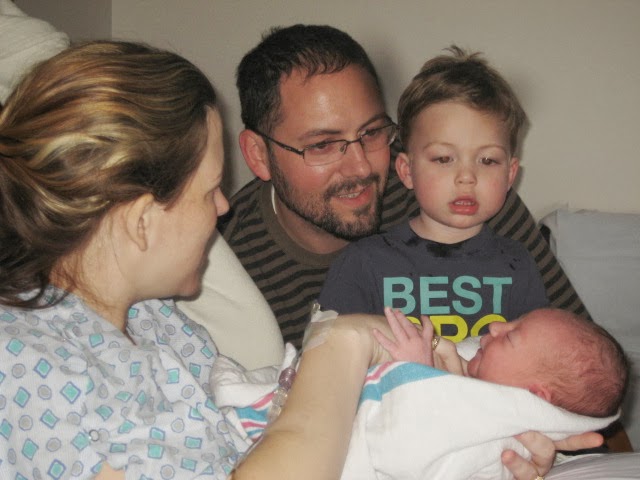 A nice shot of  'Our Holy Family'. 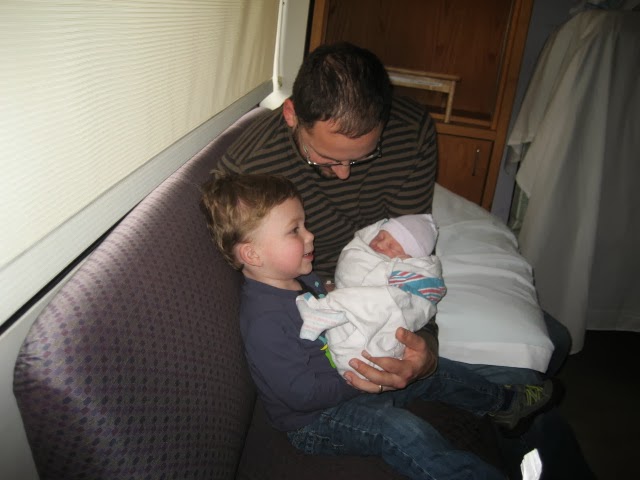 Now who's the big kid?

After the long ordeal, Jen needs a major nap. What a trooper. Andrew too. Lovely children and all are healthy. Congrats!

I remember as a child in the Schola Cantorum at Presentation of the Blessed Virgin Mary School in St. Paul, Minnesota, singing a song we called, The Christmas Rose, better known as Gesu Bambino. I thought it fitting today in honor of our little Christmas Rose, Alaina.

As ever,
proud Mom and Grandma La Verne
hope&salvage
No comments:

Life's a Beach and then it snows

While shopping for my birthday bounty at the ReStore, I found a beat up coffee table, marked, "FREE". I snagged it and knew it would make a wonderful beach table. The candidate I had in mind for it was my niece, Mer, who lived and worked in Ocean City. Although a family crisis has caused her to move closer to family, her heart will always have a special place for the beach. Here is what her table looked like in April: 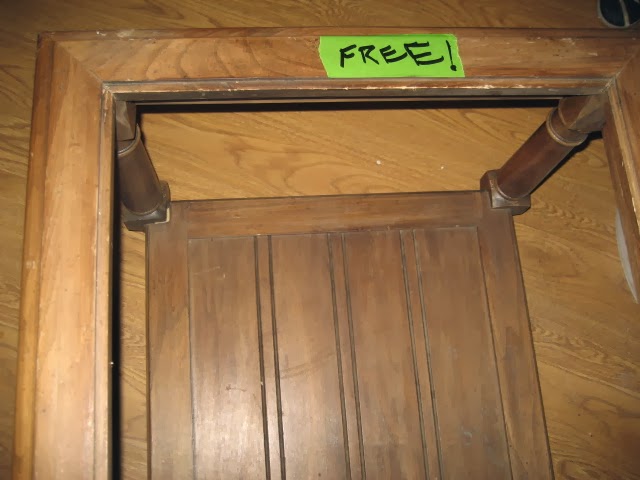 The glass was gone, the joints needed to be glued and tightened, and the only connection it had to the beach was that it was the color of sand.. 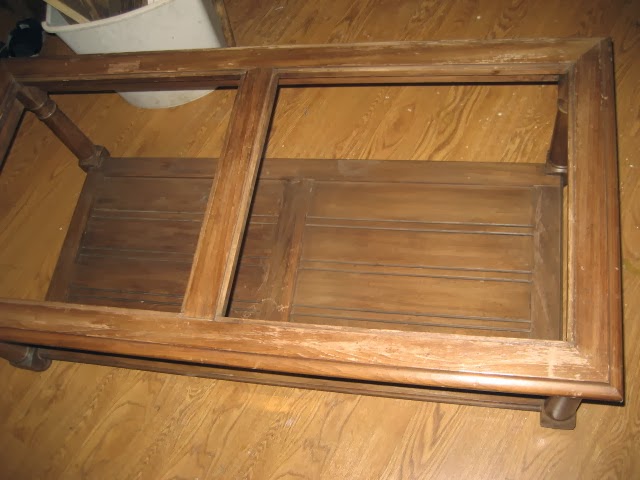 The bottom shelf had sort of a bead board effect that would look good glazed. 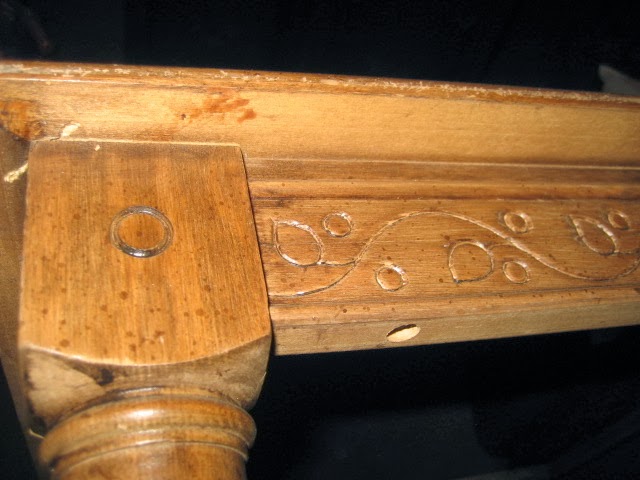 The side detail would show up better once it had some color definition. 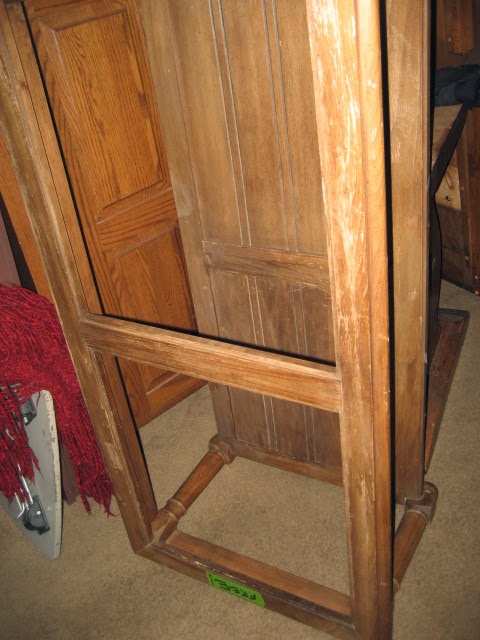 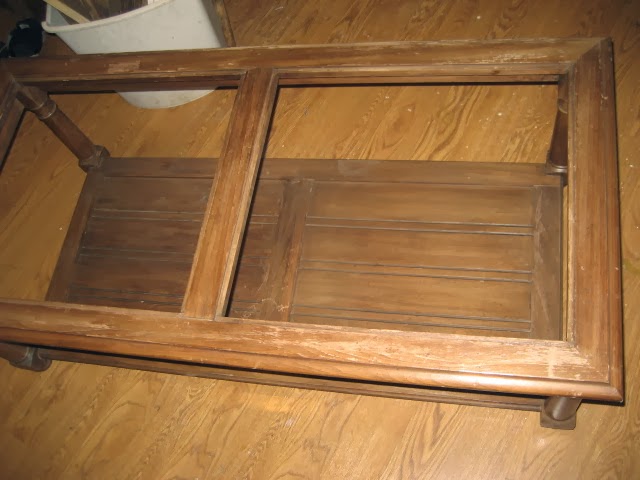 After it was painted in June, it was left to languish underfoot until last night. 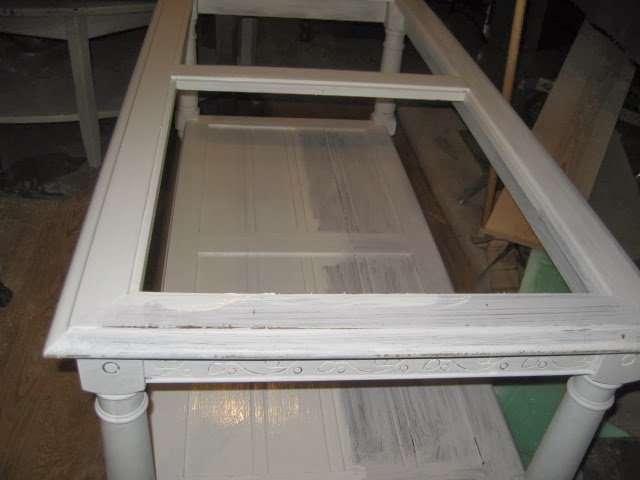 Two coats of a watered down white gifted by my friend Lynn, and then some heavy sanding. 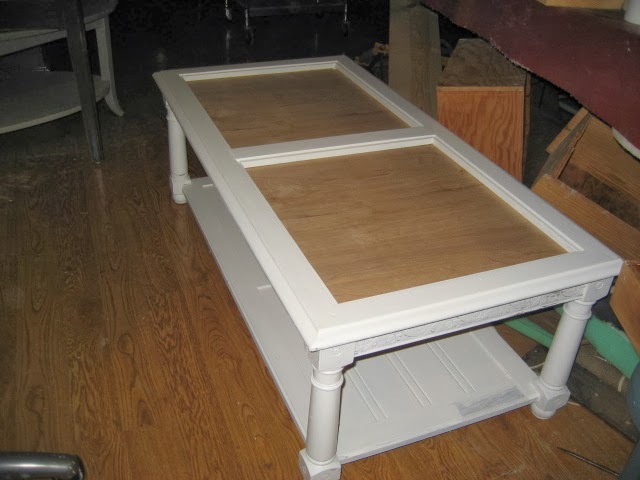 I cut some luan to fit and reinforced it from the bottom with screws, to give it a platform to affix the reclaimed lath and pallet boards. 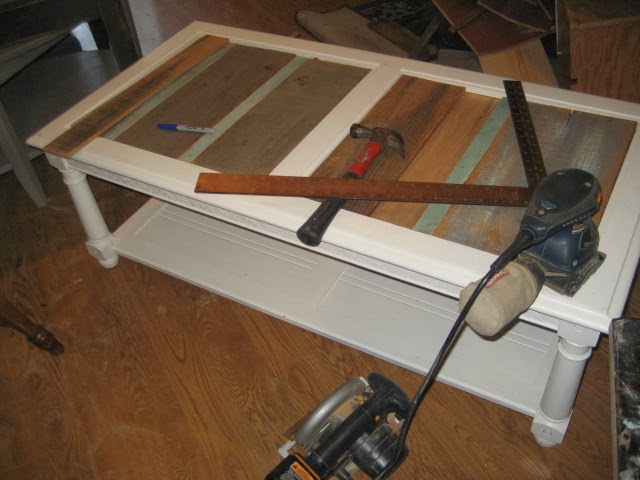 I randomly cut boards and wedged them in place. 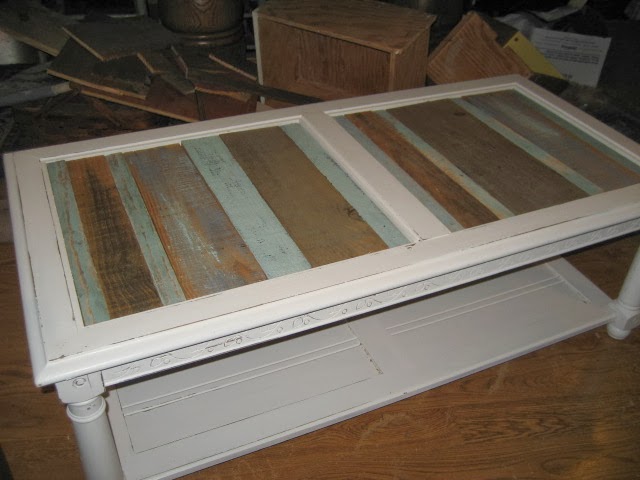 Mer is a blue person so that would be the predominant color. 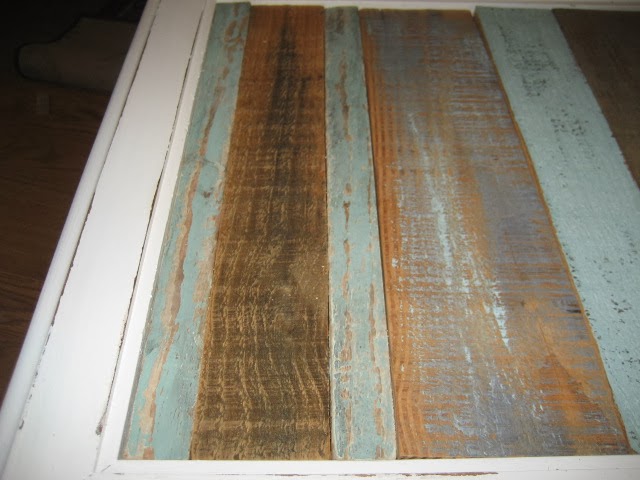 I later added some greens and pale yellows to balance the blue. 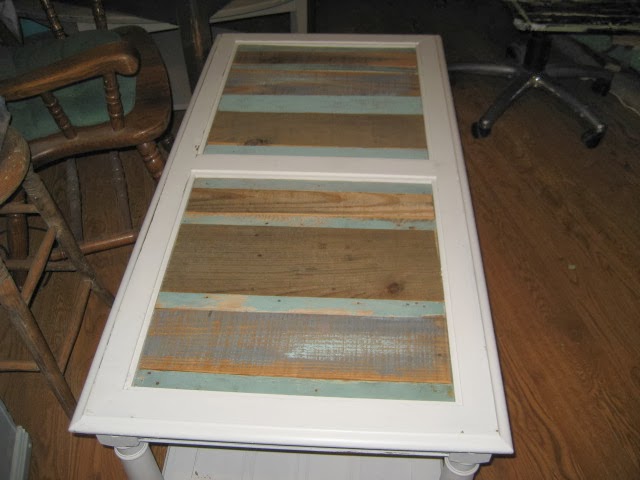 If a piece of furniture spends any length of time in my workshop, it becomes a workhorse....bench...paint holder...clamping table, etc.

This weekend was the Cookie Bake, (more later on that) so Therese and Mer were in town. This morning, when the table left for Baltimore, it looked like this: 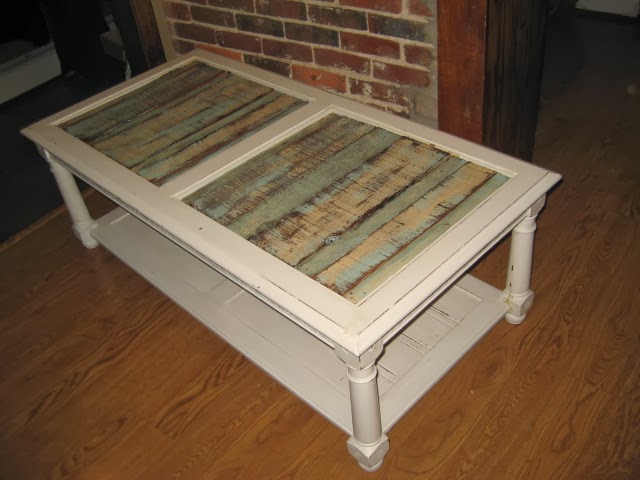 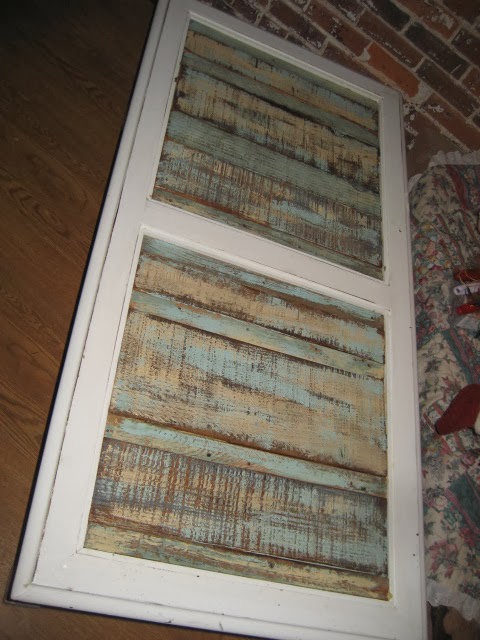 During the night I would wake up and give it more coats of poly, and reinforced the bottom with wood cleats in case some little gremlins tried to cross the room without touching the floor. 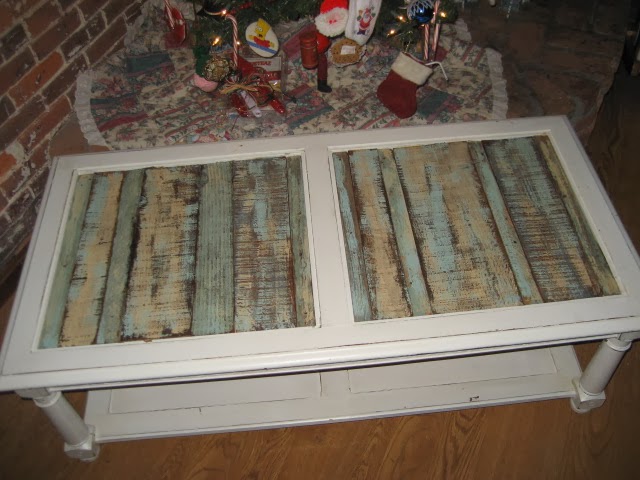 Instead of Christmas in July, it was the beach at Christmas! 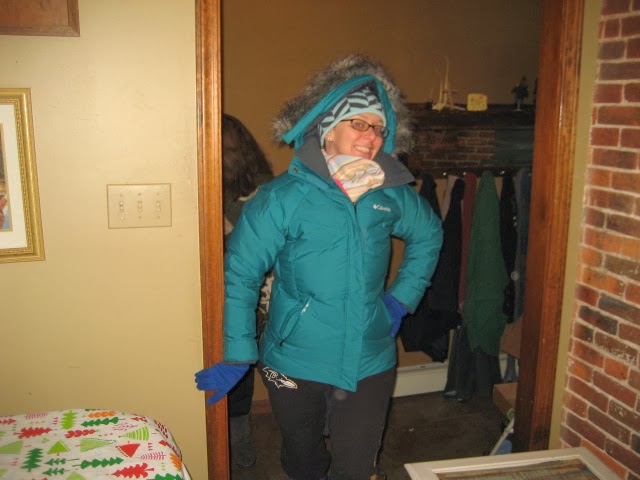 And Mer was very, very happy!

I will be posting tomorrow with some great news, so check back.

Tonight, I spent time with my granddaughter at her Parish School of Religion class. We traced our hands on green paper, cut them out and placed a red heart on which we had signed our name to the middle. They were then all attached to a classroom Advent Wreath. In bunches, the paper hands became the greenery encircling the four Advent candles. Afterward, we processed to church for a small service. Each was given a small prayer card and asked that wherever we are tomorrow at 12 noon, we were to recite the prayer in hopes of ending world hunger. Pope Francis and Caritas International are the starters of this "spiritual wave". It is only 7 sentences long, plus an AMEN.  I invite you to say this prayer at whatever your 'noon' might be. Ask a friend or co-worker to say it with you.

There is probably more of this campaign than I know, but a single prayer with a million echos, sounds like an awfully good start in the hope of ending world hunger. Hunger is something I have never known. Even in times when bills were behind, a job was out the door and no prospects in sight, there was always a meal. Tonight it is pretty cold in Northeast Ohio. Although it is 27 degrees, the winds are 25 miles an hour, and it will snow overnight and be in the teens tomorrow. Some people are in the elements with no shelter, and no food.  In years past, I have worked in a hospice for the dying poor, handed out meals at hunger centers, and piled shelves at the Food Bank, all while having food in my own pantry and refrigerator. I remember a time setting up a serving line at the West Side Community Center with service groups from various churches. We were told that after we were done serving we were to each take a plate and sit wherever there was an empty seat, and converse with our guests for the rest of the meal. One of the parents of a school group stated that they were here "only to serve the meal, not eat with the patrons". The director again stated the protocol to follow for the evening. The parent also again stressed that they were only here to 'serve', not to 'mingle'. The director politely thanked them for coming but that they could leave now, because the rest of us "had to be about our Father's business".  I always thought that was harsh, but also the right thing to do. Not any of us know what tomorrow's dawn will bring us. Or, the rest of our human family. Please join us at noon on December 10th......

"O God, you entrusted to us the fruits of all creation so that we might care for the earth and be nourished with its bounty.

You sent us your Son to share our very flesh and blood and to teach us you Law of Love.  Through His death and resurrection, we have been formed into one human family.

Jesus showed great concern for those who had no food - even transforming five loaves and two fish into a banquet that served five thousand and many more.

We come before you, O God, conscious of our faults and failures, but full of hope, to share food with all members in this global family.

Through your wisdom, inspire leaders of government and of business, as well as all the world's citizens, to find just, and charitable solutions to end hunger by assuring that all people enjoy the right to food.

Thus we pray, O God, that when we present ourselves for Divine Judgment, we can proclaim ourselves as "One Human Family" with "Food For All".  AMEN.

As ever,
La Verne
hope&salvage
No comments: