Today's post is more about love and family than it is about furniture and competition. Sure there was a friendly rivalry between The Salvaged Boutique and Hope and Salvage, but to dive first into that reveal would be burying the lead.

My young, grandson, who turned 1 in October, was diagnosed a week ago with Kawasaki's Disease. After a 5-day temperature of 105 degrees, and tentative diagnosis of Roseola, the doctors at Nationwide Children's Hospital, gave Pete and Angie a new axis to spin their world on. Adam came home from the hospital yesterday for the second time, after receiving 2 transfusions of ivig. KD is an autoimmune, orphan disease of unknown origin that has good recovery if caught early. Some of the complications are heart disease and arthritis. Adam was the picture of health on Easter. 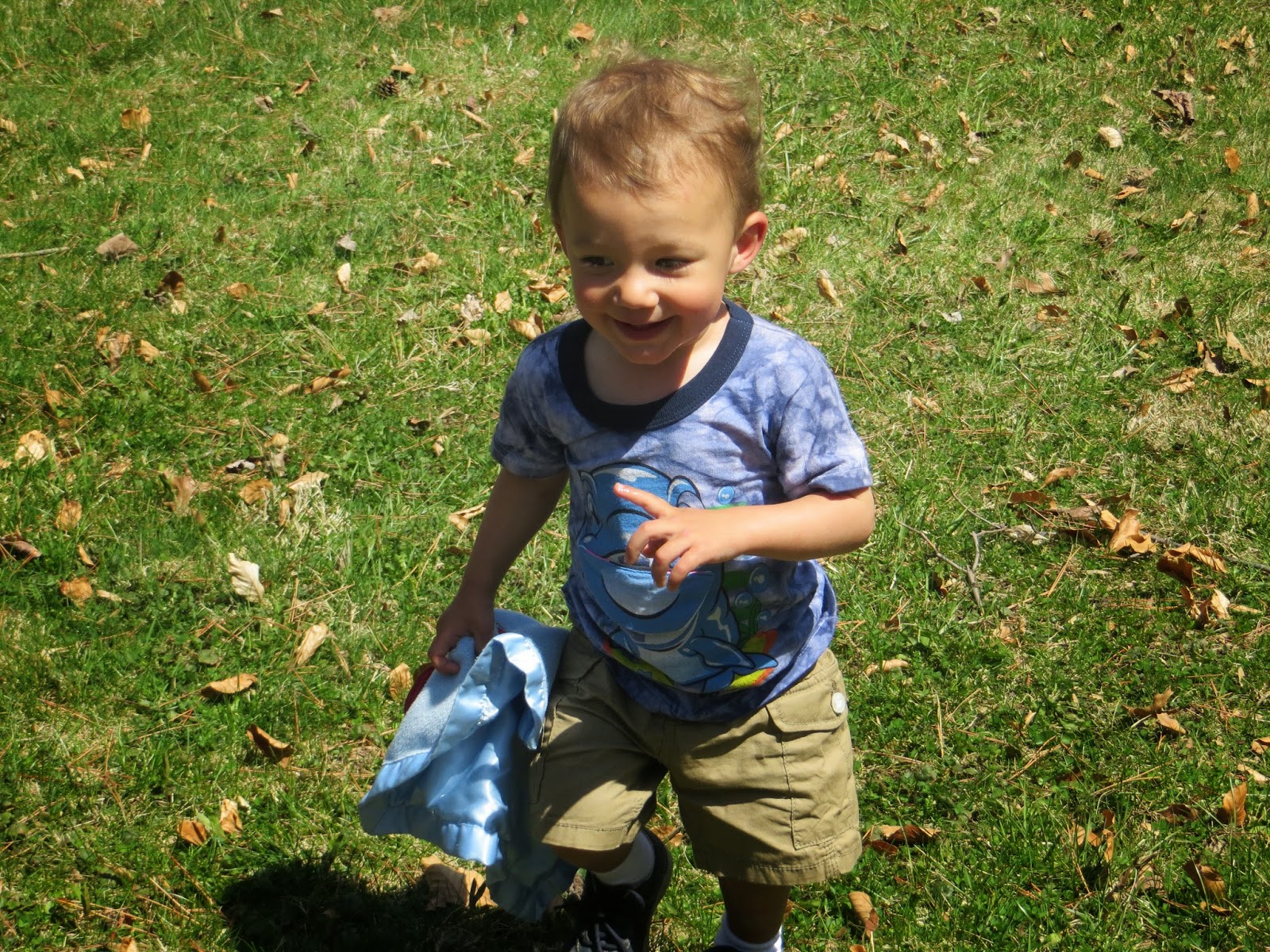 In two weeks time, he was this sick little fellow.

His joints were swollen and he could not walk. A rash covered his whole body and his lips were cracked and blood red. His eyes were pink. And his skin kept peeling. Every 15 minutes they gowned and checked his vitals. Adam the Terror was missing...

At the same time, a family member was in a toxic situation, and rescued by a sibling a thousand miles away. Deus ex Machina, stepped in, and with tough love, removed the obstacle of the "not so good street" and tossed the life ring. Still a work in progress, but at least now there is a horizon!

These things, and other serious matters, consumed my mind and my heart this past week, not the rescuing of furniture. However, "today is the day, my mountain is waiting" ...

My computer, (which contains all my staging photos), has its idiosyncrasies and chooses to work (or not) at will. Serendipity prevailed and today is a working day! Here is a look at the before of my antique, upcycled, file cabinet before the start of the competition
. 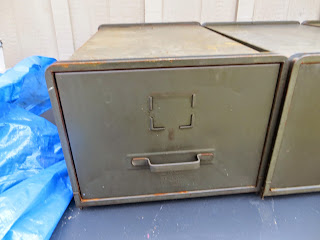 We each started with a 1918, Berloy, single stacking steel file drawer, and had carte blanche to refurbish as desired.

My first trip was to Habitat for Humanity's ReStore for supplies. I found a large oak drawer marked $10 with a 25% reduction on everything in the store. Checking the receipt later I noticed that instead of $7.50, they only charged me .75.  [Will have to ante` up on my next trip.] The drawer tipped sideways would be the crux of my base. I had gotten some industrial casters for $6. each from a salvage guy on Craigslist. A friend had given me an old wooden lawnmower box, that I knew would be perfect for making the lower storage box, and the rest of which I planned to use to cover the exterior of the pieces, interspersed with lath boards, which have become sort of a signature for me. Total expenses for this project was less than $25.00. 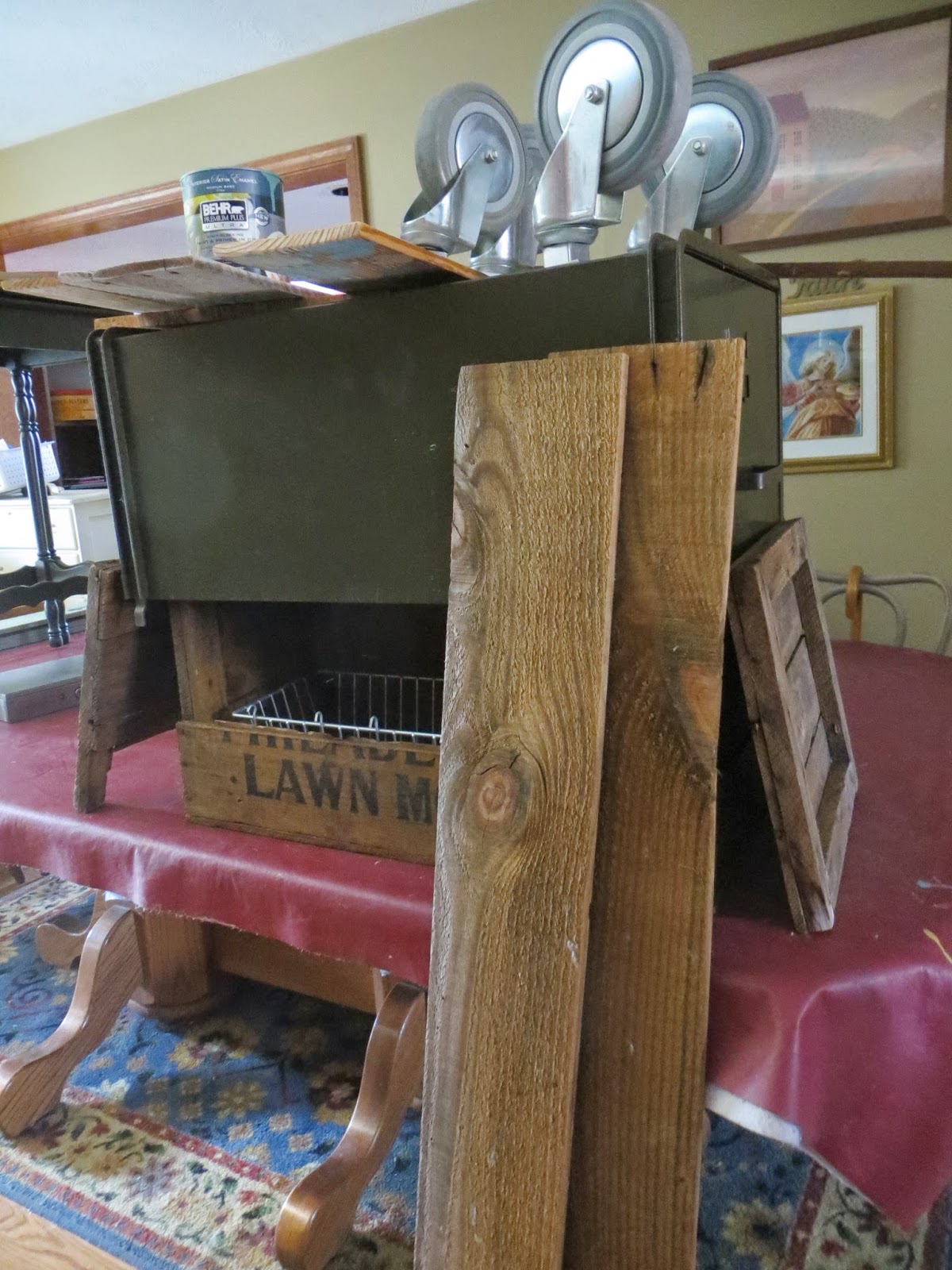 My studio, the day after Easter, hence the fairly clean background. 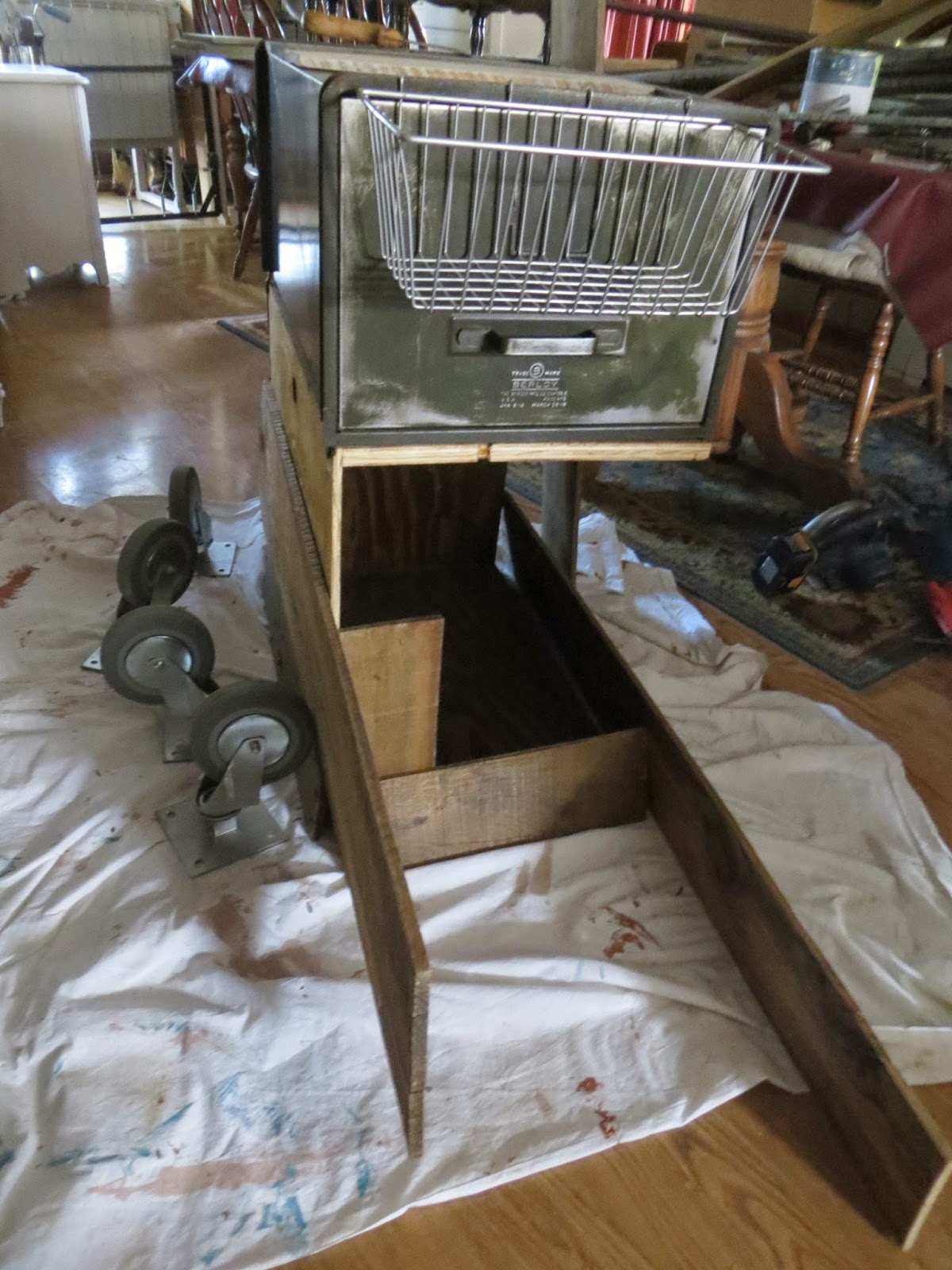 I knew it was going to become a utility cart and somehow, I would work in some storage baskets. 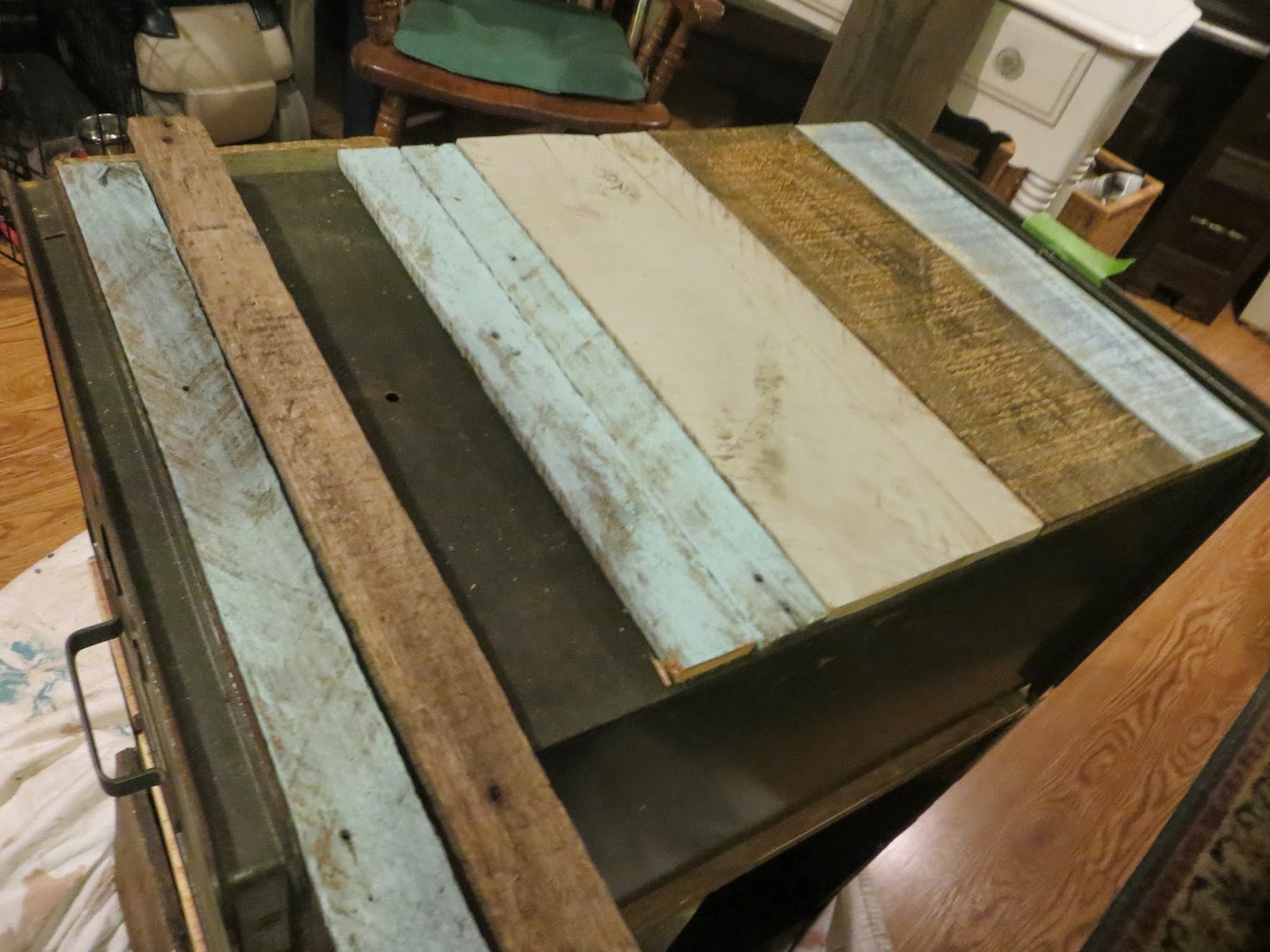 I started laying out my lath boards and tried not to cut until I was certain, as there is a scarcity of them in the Cleveland area right now. 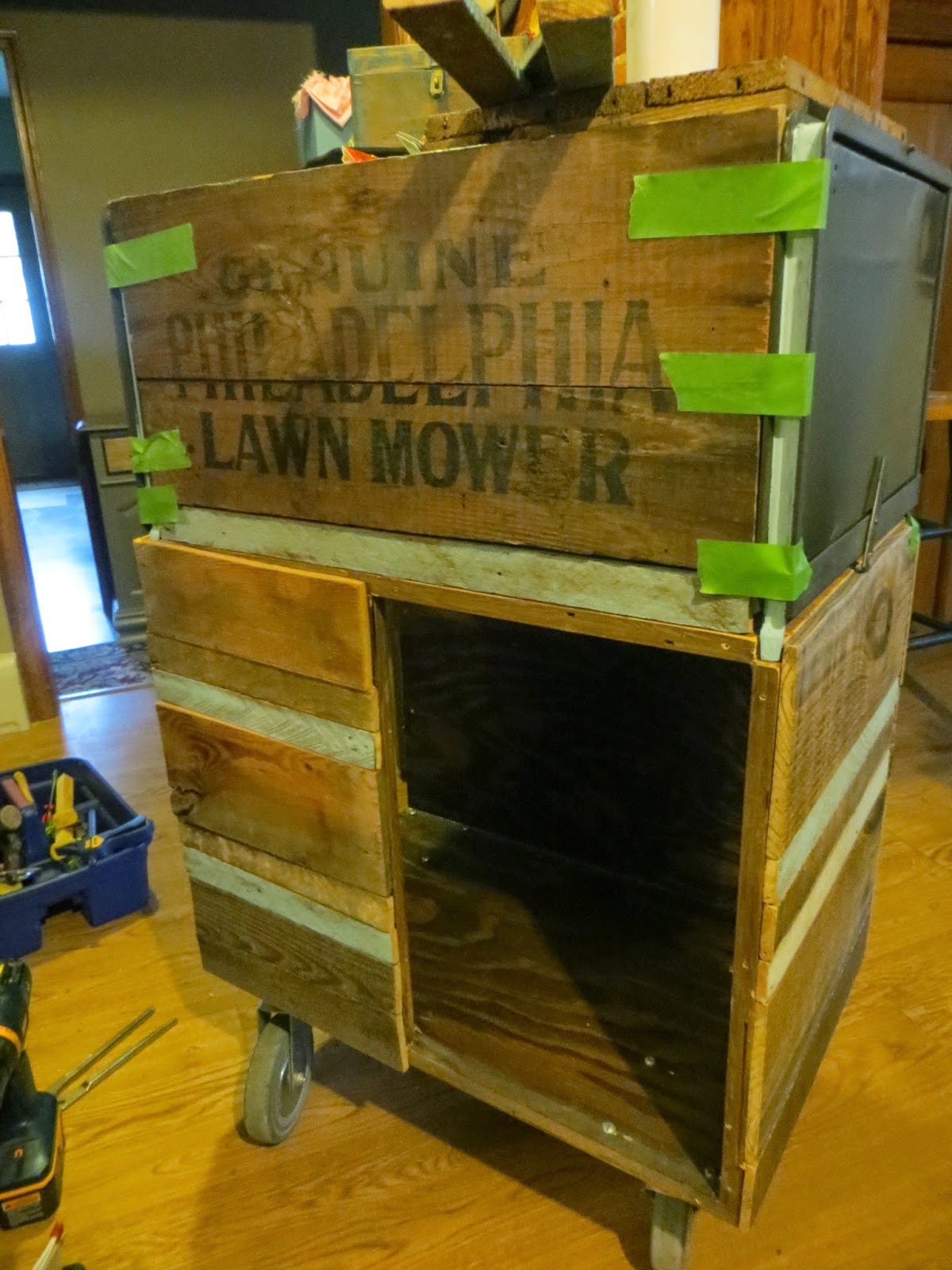 I sort of taped pieces into place to get the feeling for someone "else" thinking this was a wonderful, usable cart. 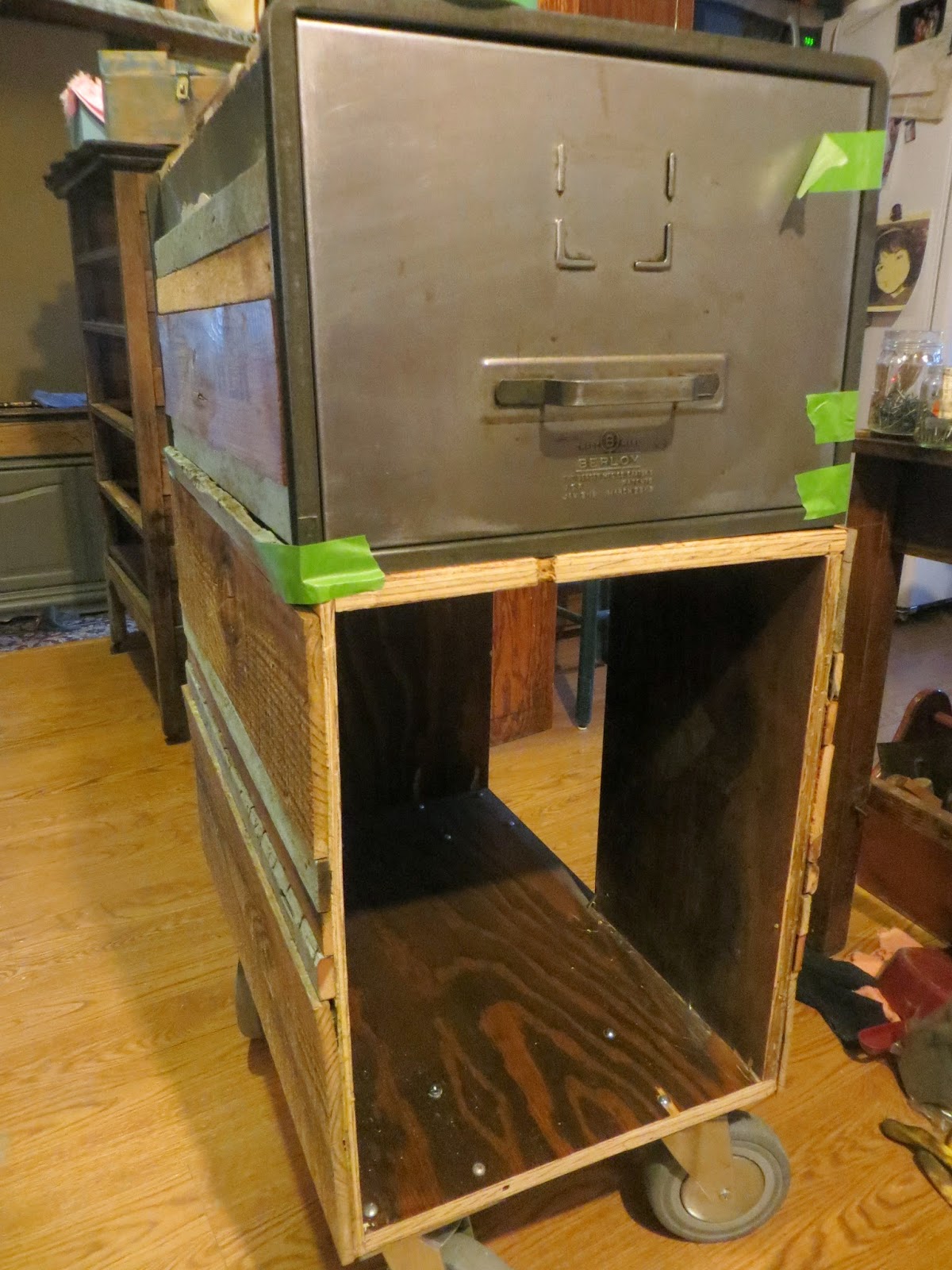 I started to sand the old paint off and realized that Stripeeze worked faster and leave fewer scars on the metal. Toxicity be damned, as I am already on borrowed time. 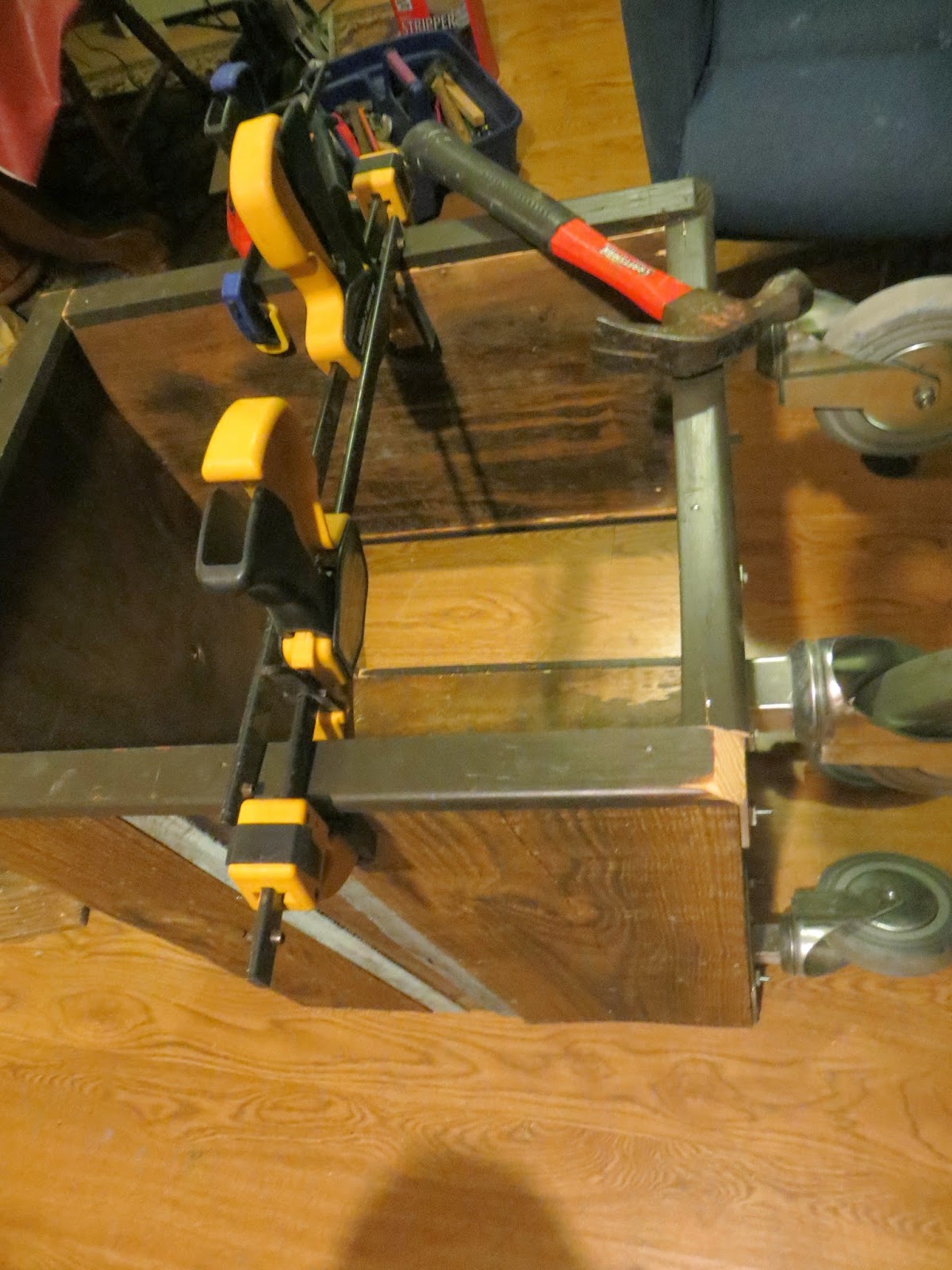 Son Ryan helped me attach the casters. Always dry spin before attaching to see if there is enough space to spin freely. I used old yellow pine molding from a tear-out I found on Craigslist, on W. 78th, to trim out the openings 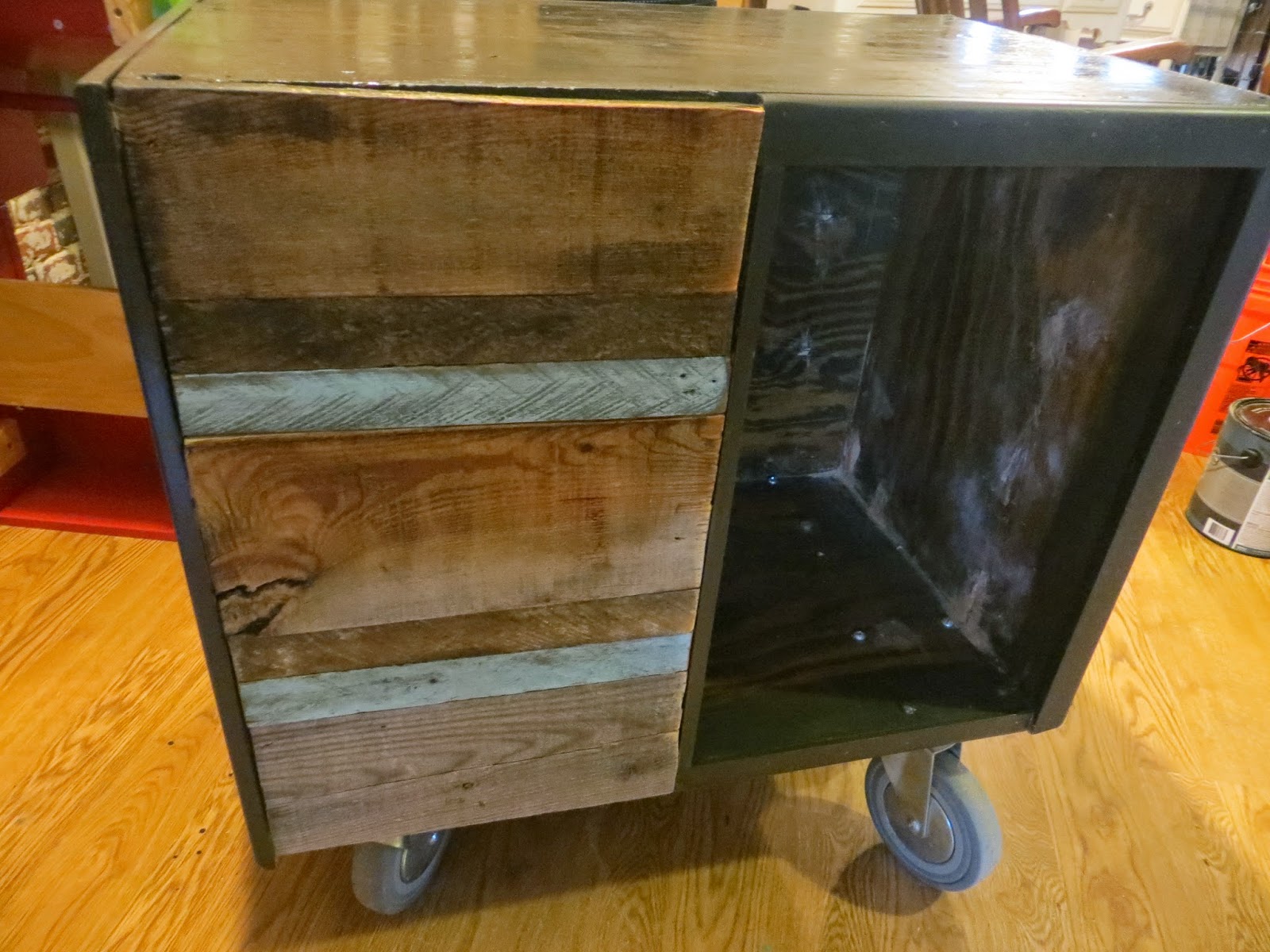 I used Bondo to patch holes from drawer dividers before painting interior with leftovers of an Oops paint. 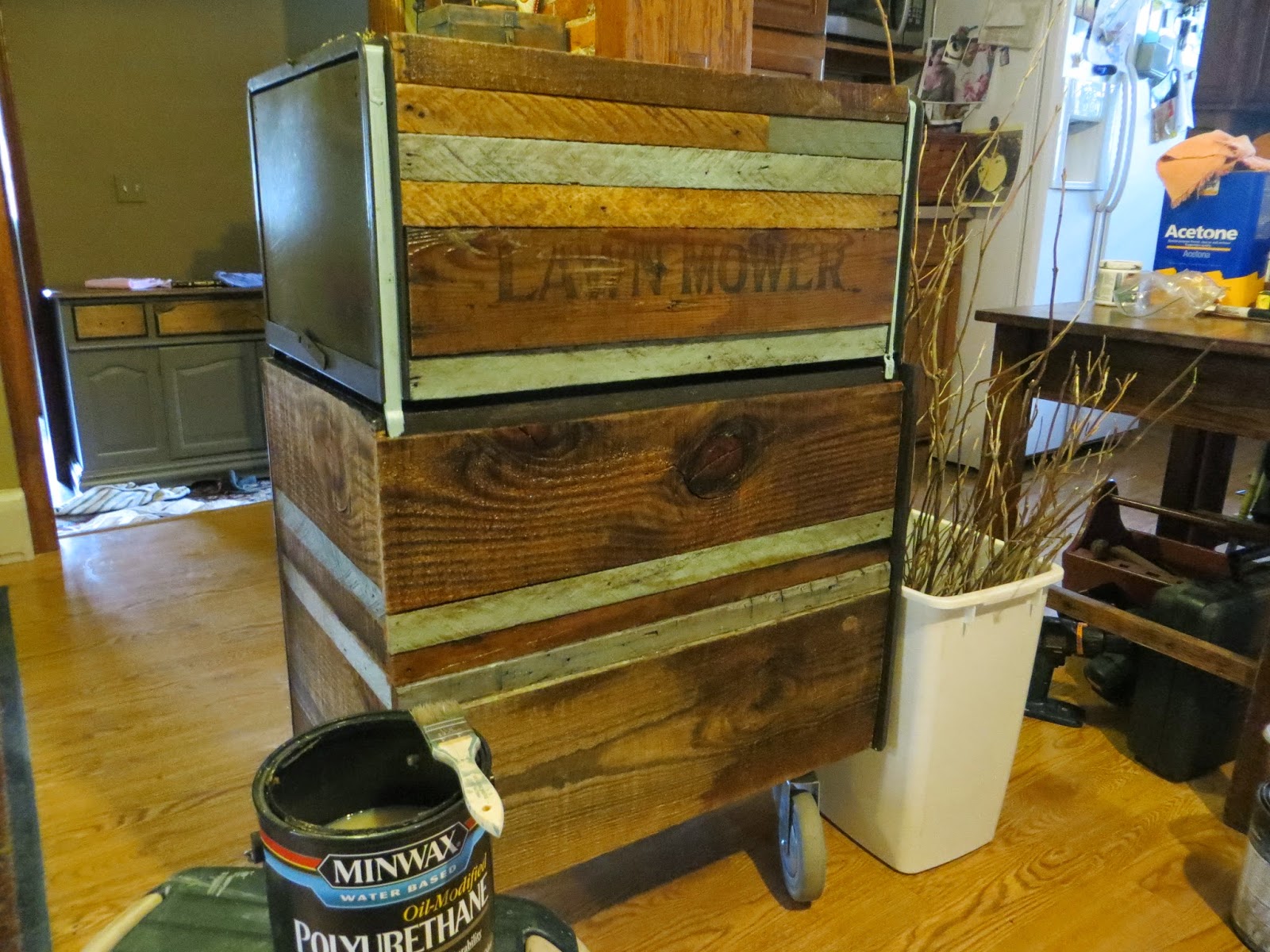 Not being sure how the cart was eventually going to be used, I poly-urethaned with Minwax. I hope to enter this cart in the Minwax competition (currently running). The theme is "I did that because...".
My statement is... 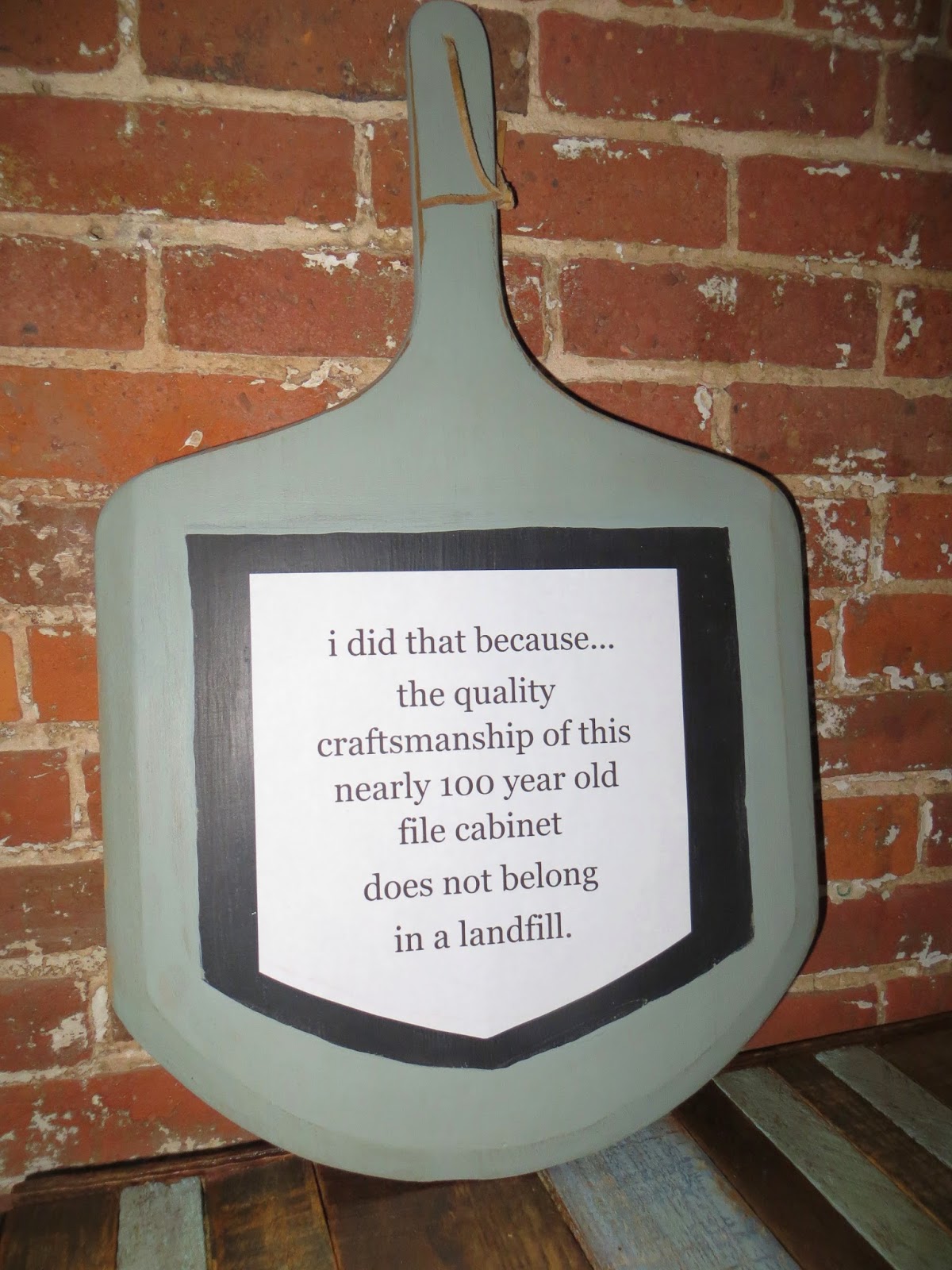 Minwax is one hundred years old this year, and the company refers to "quality craftsmanship" in the advertising of their products. Although I've had some issues with their "high build" urethane, overall, I can depend on their product, and they are quick to rectify any problems. Well, "quick-ish".

UPDATE:  I TRIED to enter this piece in the Minwax competition, however, they never posted it to their site for judging. So, I add to my observations about Minwax, "dependable-ish". 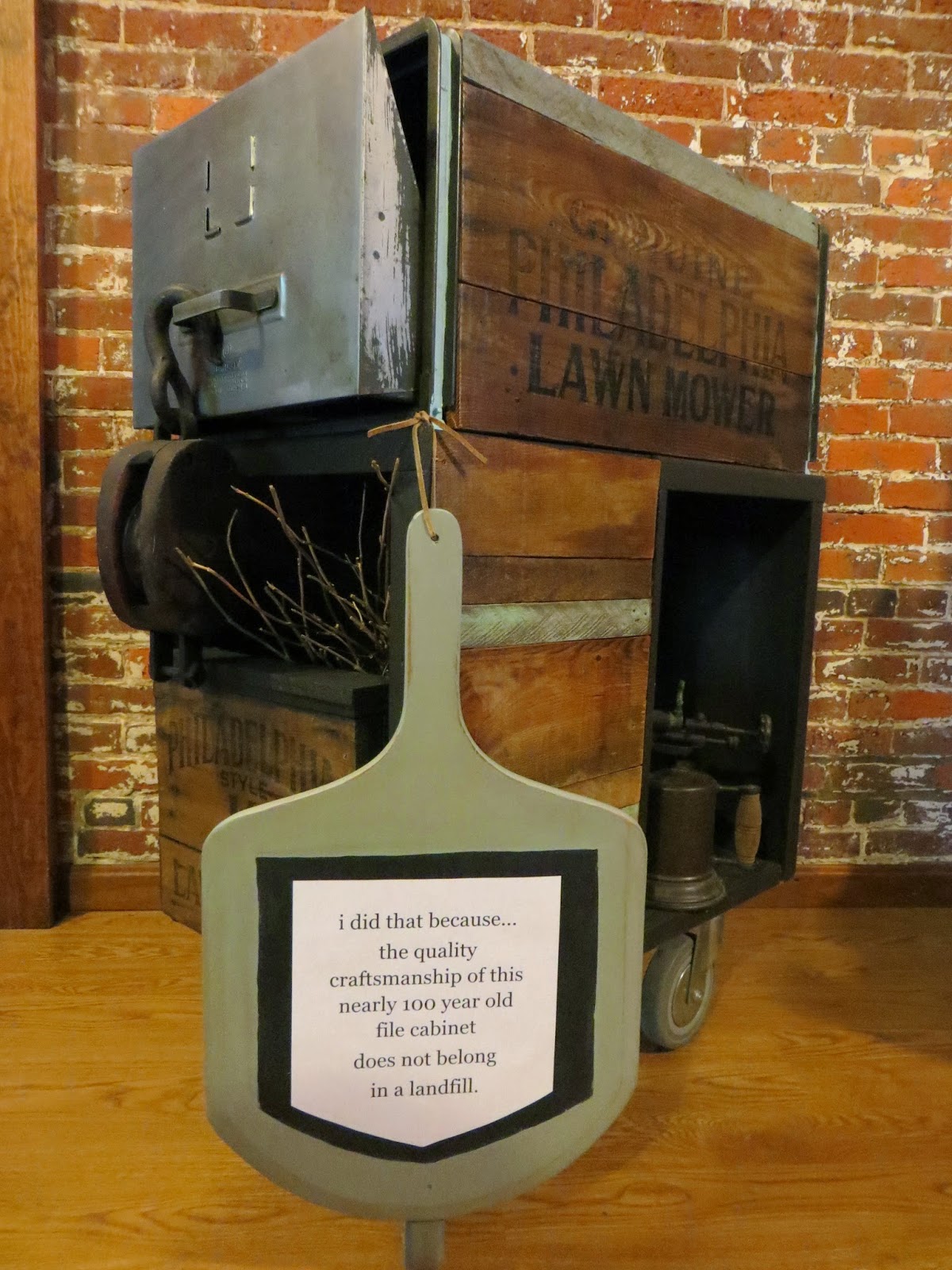 Originally, I had intended to go with a glossy red and a fancy script for a coffee cart, BUT, I don't drink coffee, therefore do not feel I should promote it. The turquoise-y color fell into place as it was the color that the lath boards had been painted some 90 years ago. 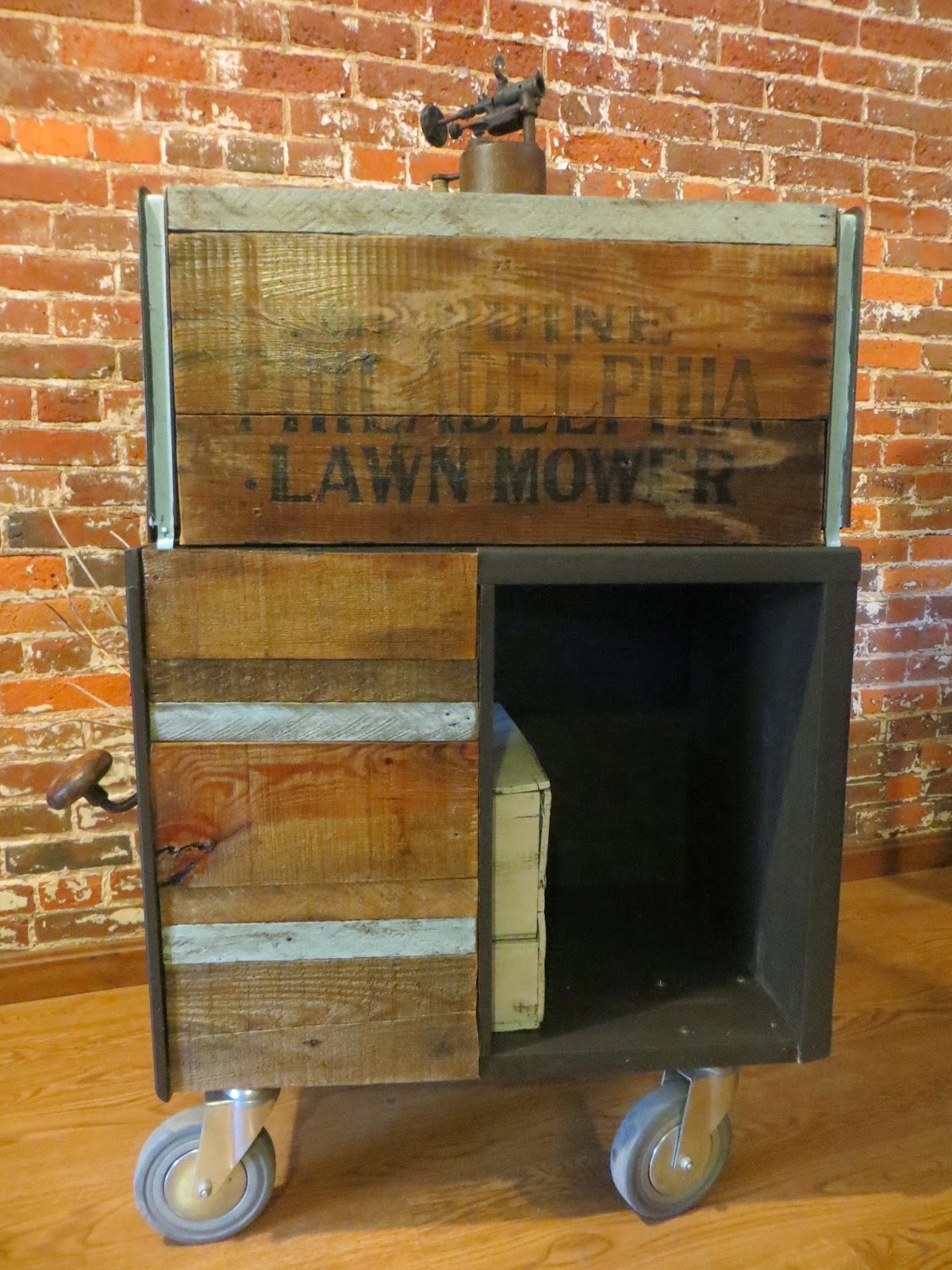 I'm pretty pleased with the outcome. Many hours passed listening to books on tape, while I measured and painted away. I've found that visiting dogs can adjust to the constant whine of a compound miter saw and like tolerate it. 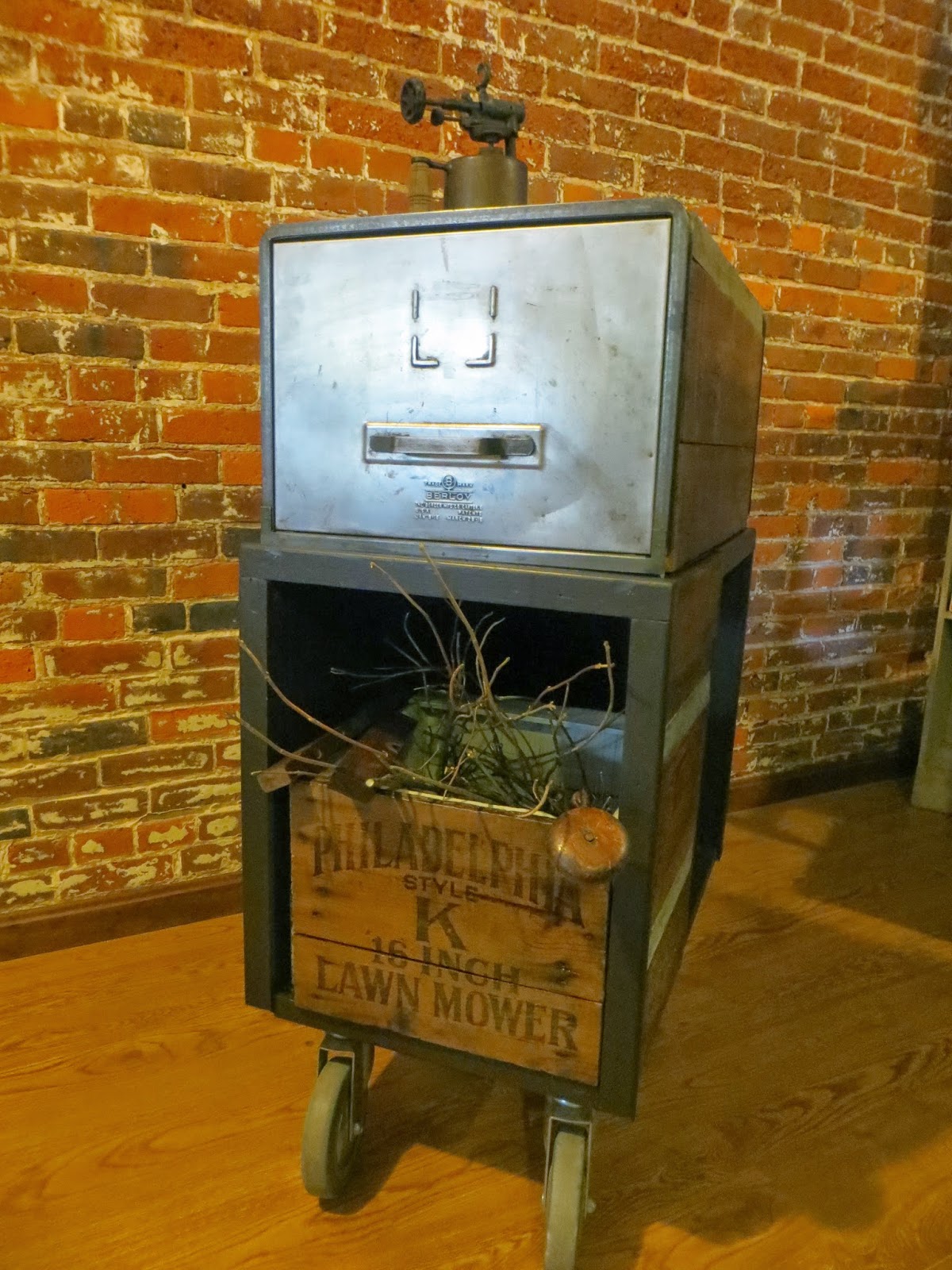 I always wonder why so many bloggers show every possible angle of their item. And, here I am, Miss Copycat. 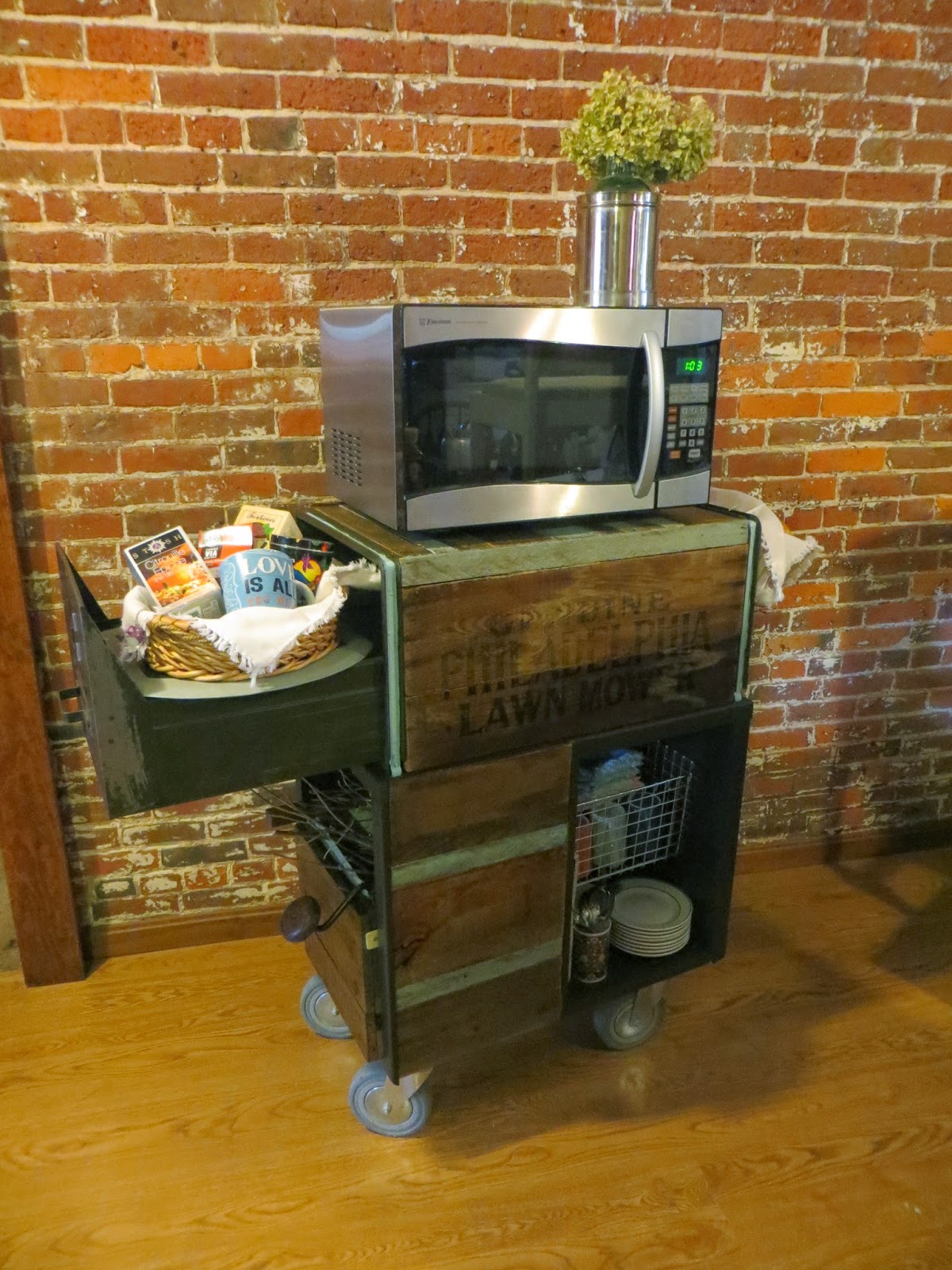 Bethany helped me stage the cart for possible uses. It was hard not to get a glare on the microwave glass. The shadows on the side were inescapable. Well, you would know why if you saw the room. Think clown car. 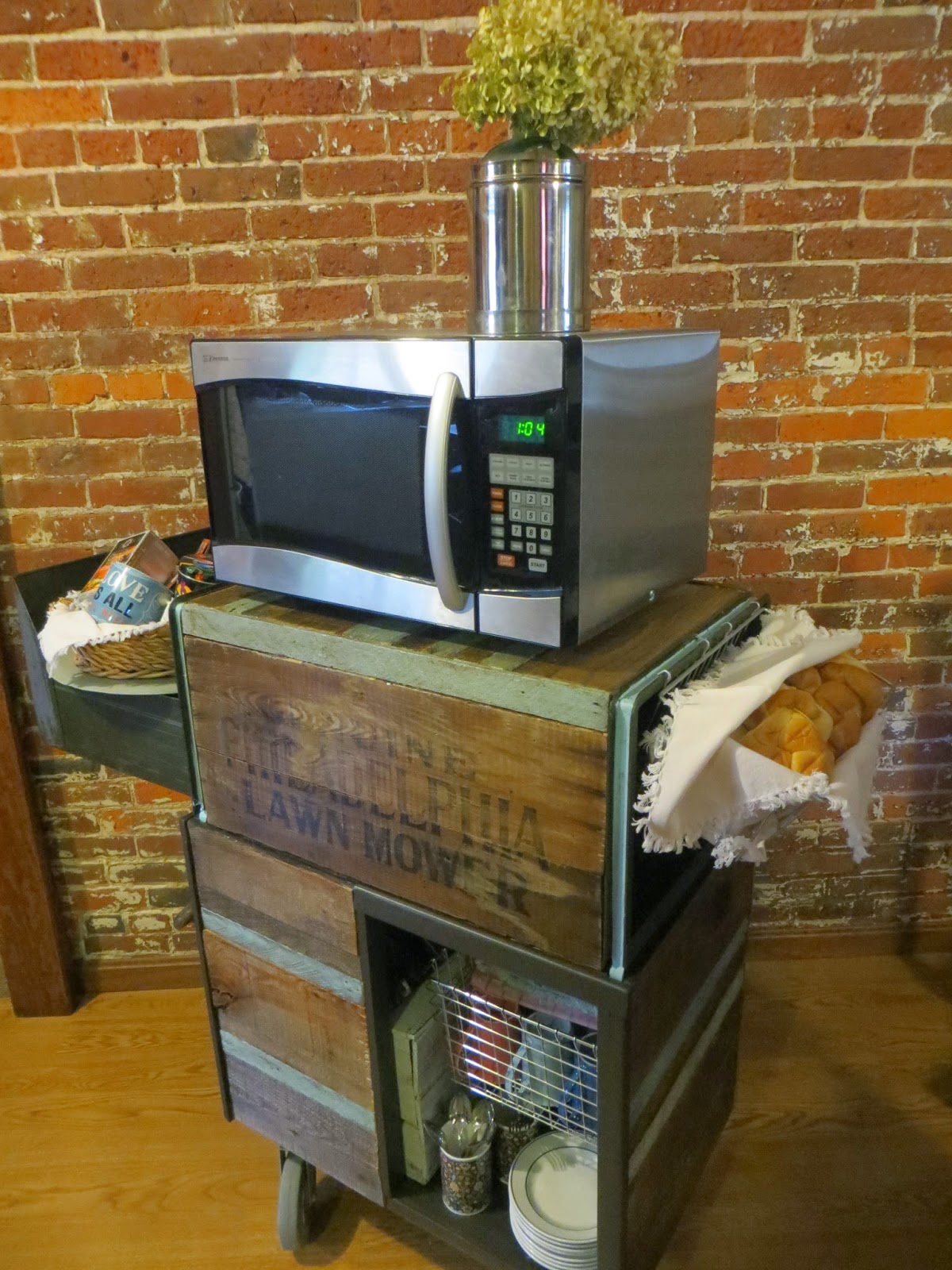 It spins like a top and is extremely versatile. I made it modular so the top could be removable. I fit the shanks into small grooves so that it just lifts off. 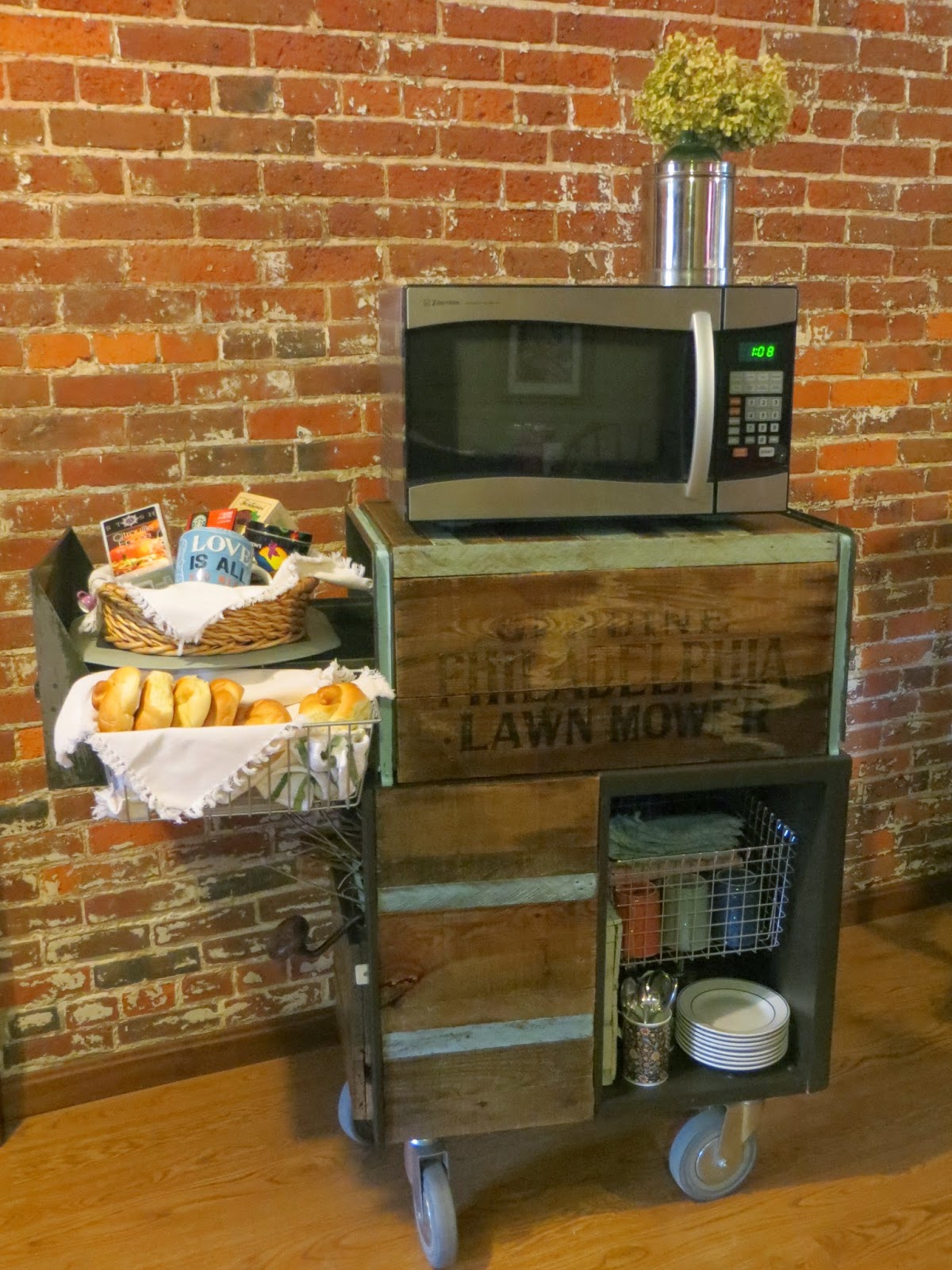 The wire basket holding the 'bagels' has hooks on the back and can be shifted as needed. 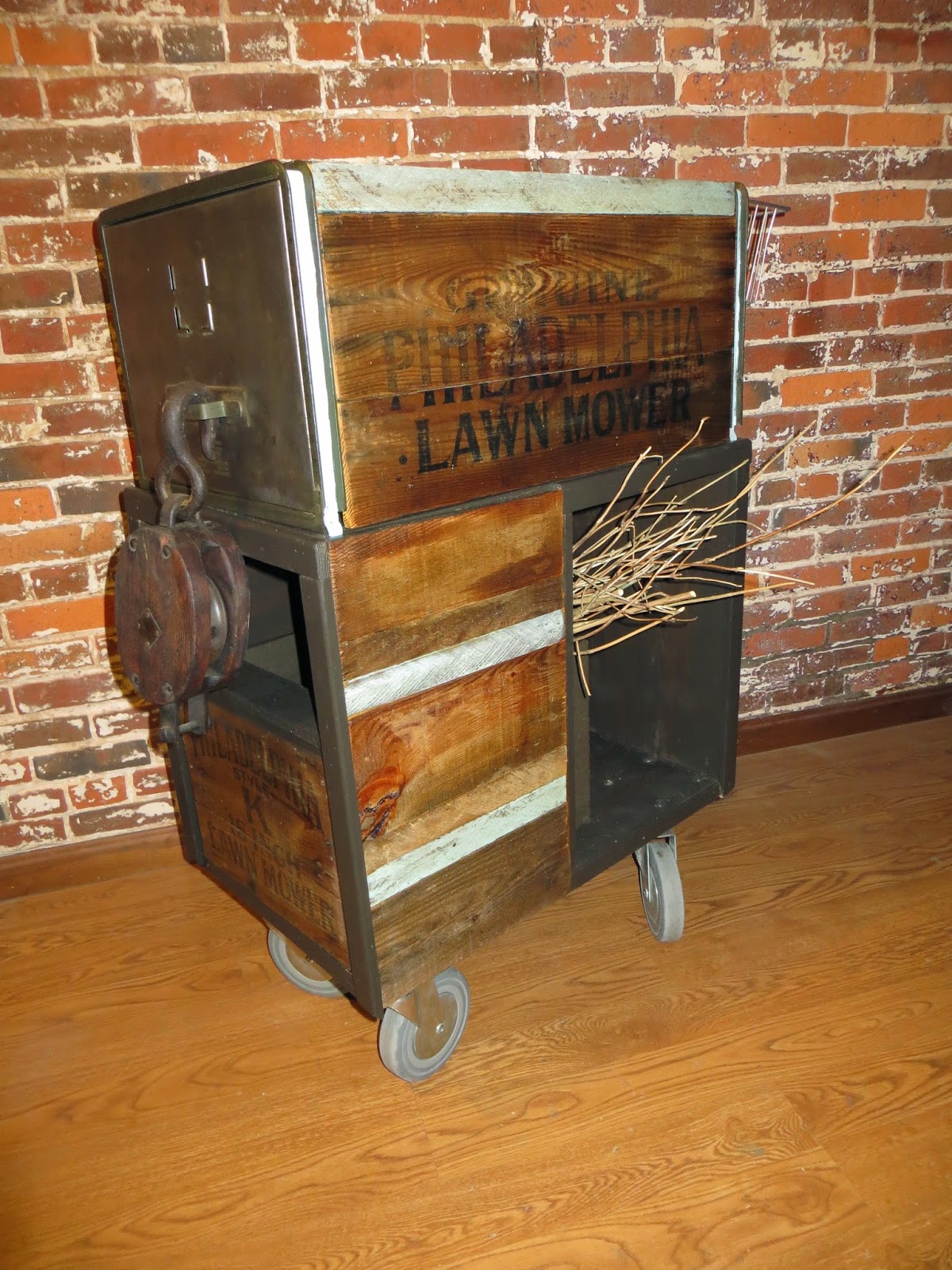 Liking the sleek lines and the "lucking" out on all fronts. 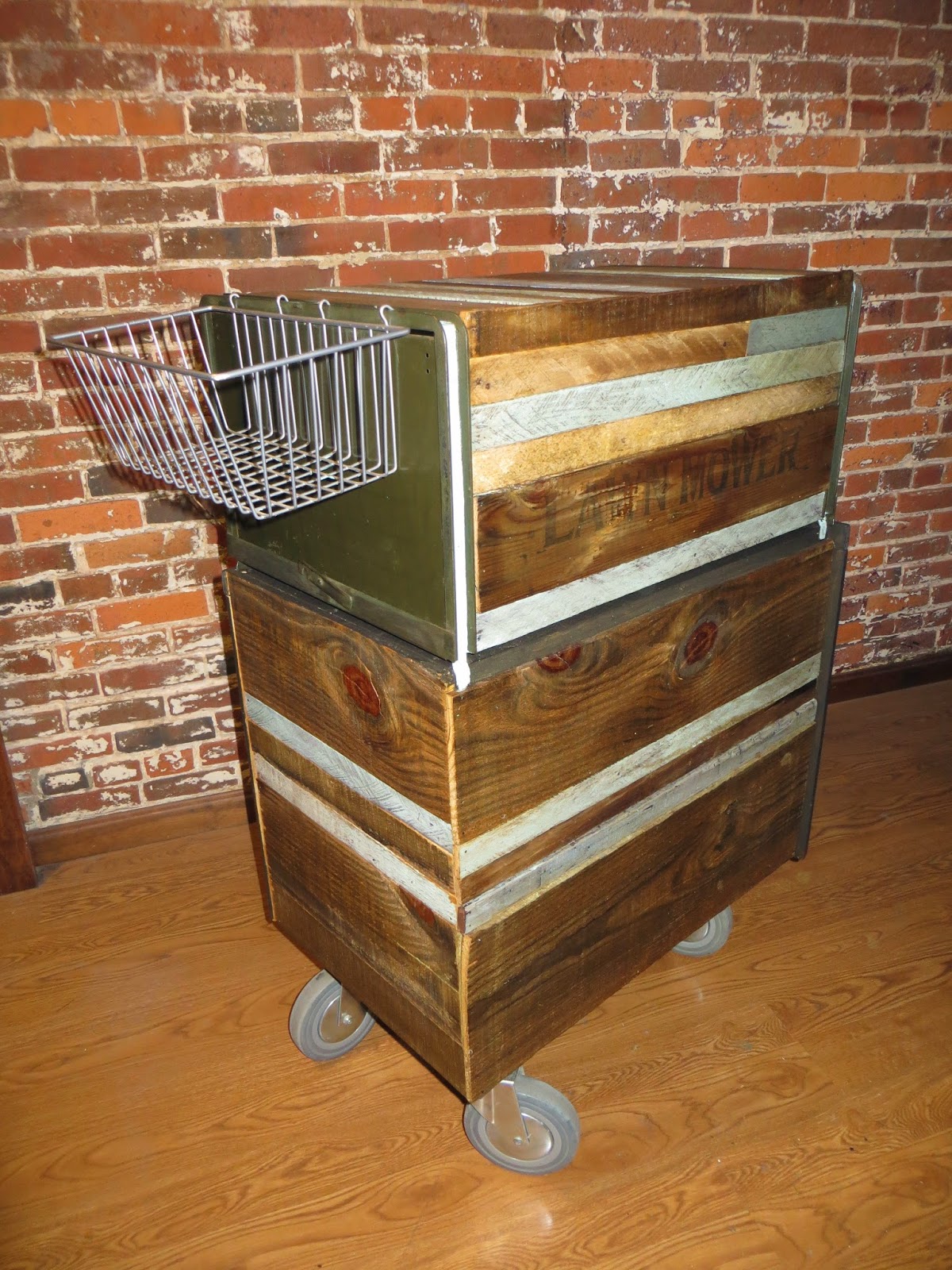 In the interests of 'keeping it real', I did not strip the top back of the cabinet due to lack of time when emergencies arose, but I intend to, because I am really fond of the industrial look. I hope to be able to show this at the Westlake Antique Show on July 20th. Beyond that, I don't know. I seldom keep anything for myself, but this one, I may. I still have two other file drawers that are awaiting only my imagination. 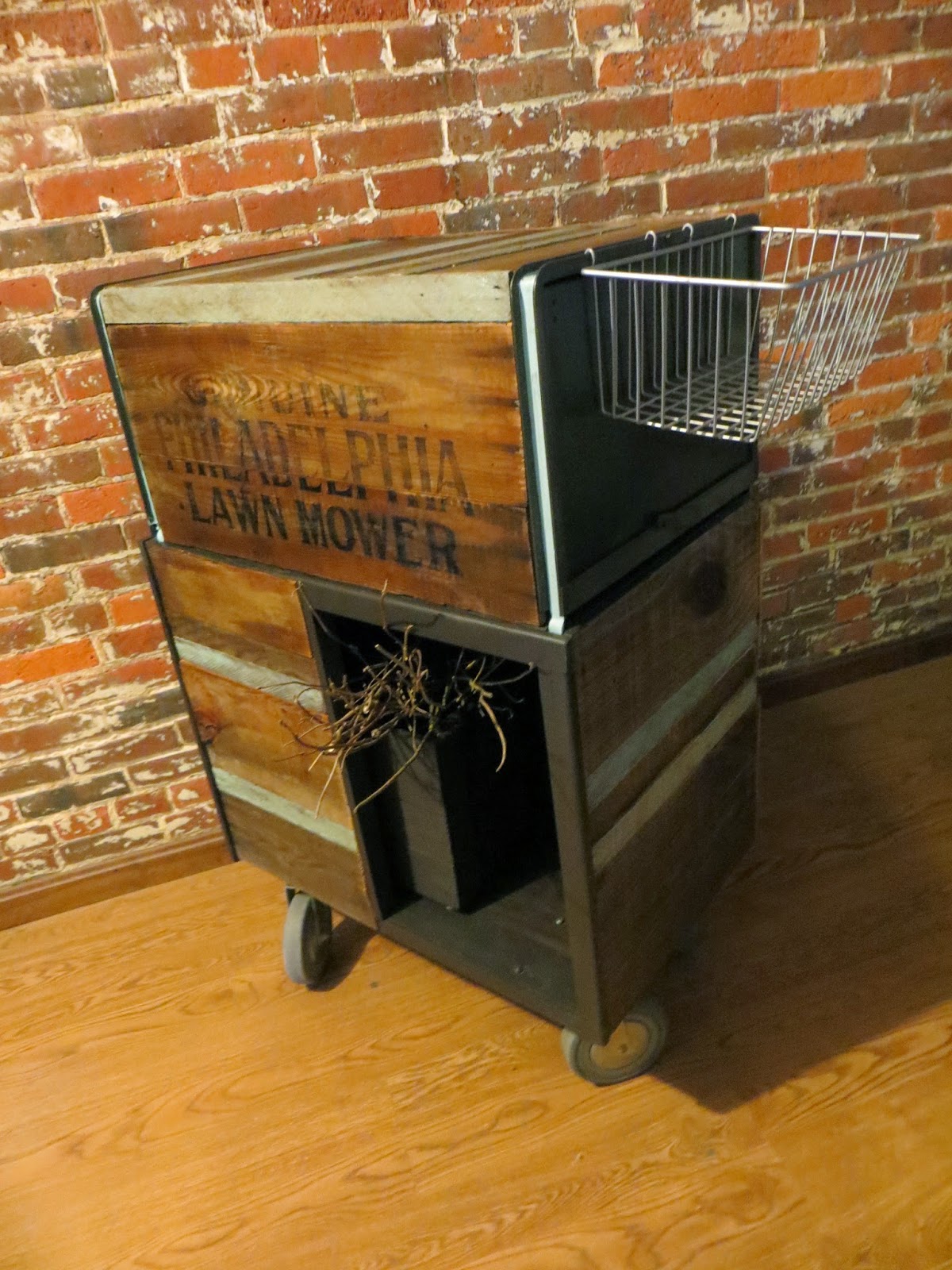 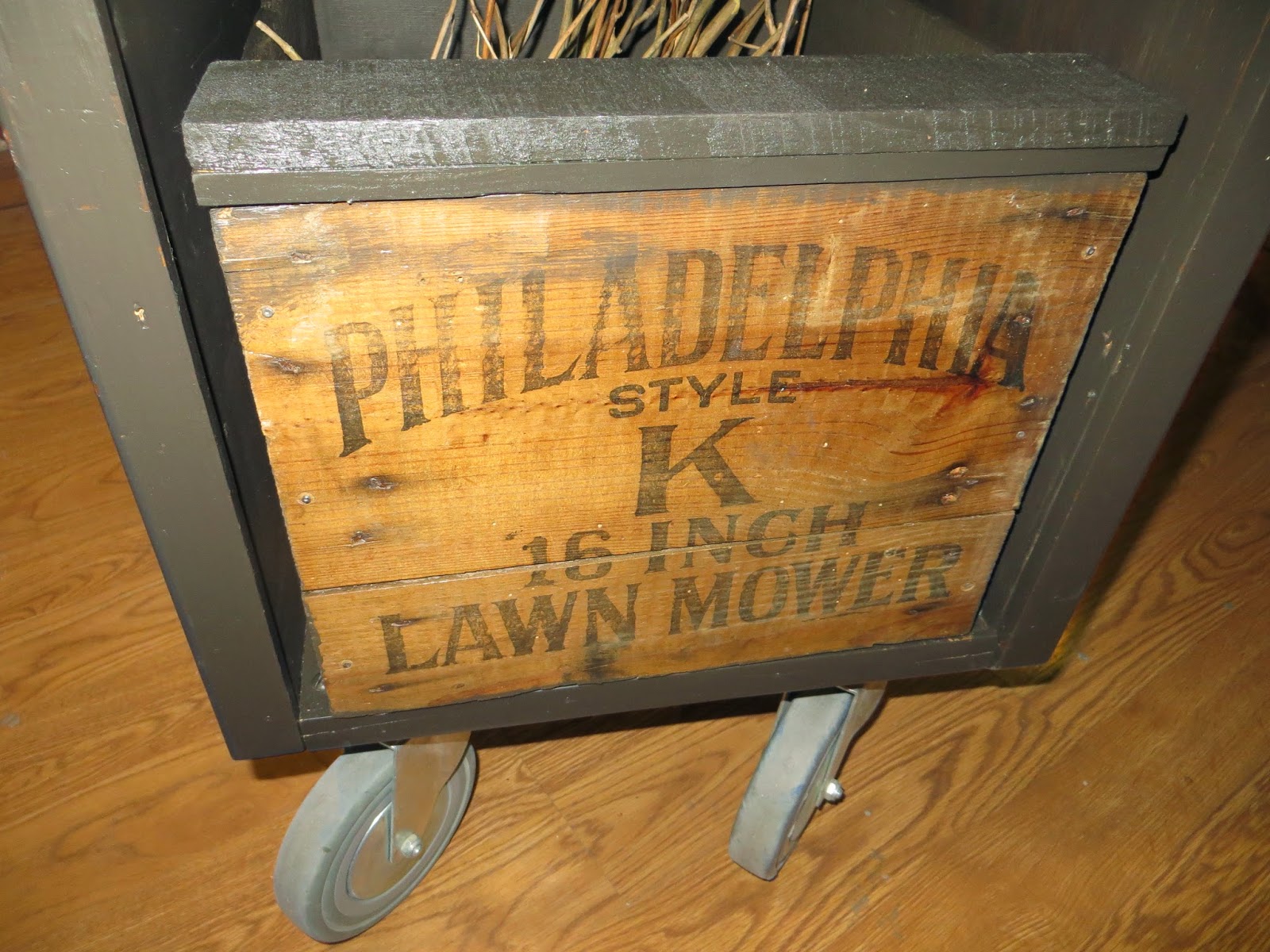 I used the end of the box and attached it to another wooden box I used for small wood storage and it was the perfect size to slide in and out of the front. (see below) I added felt sliders. 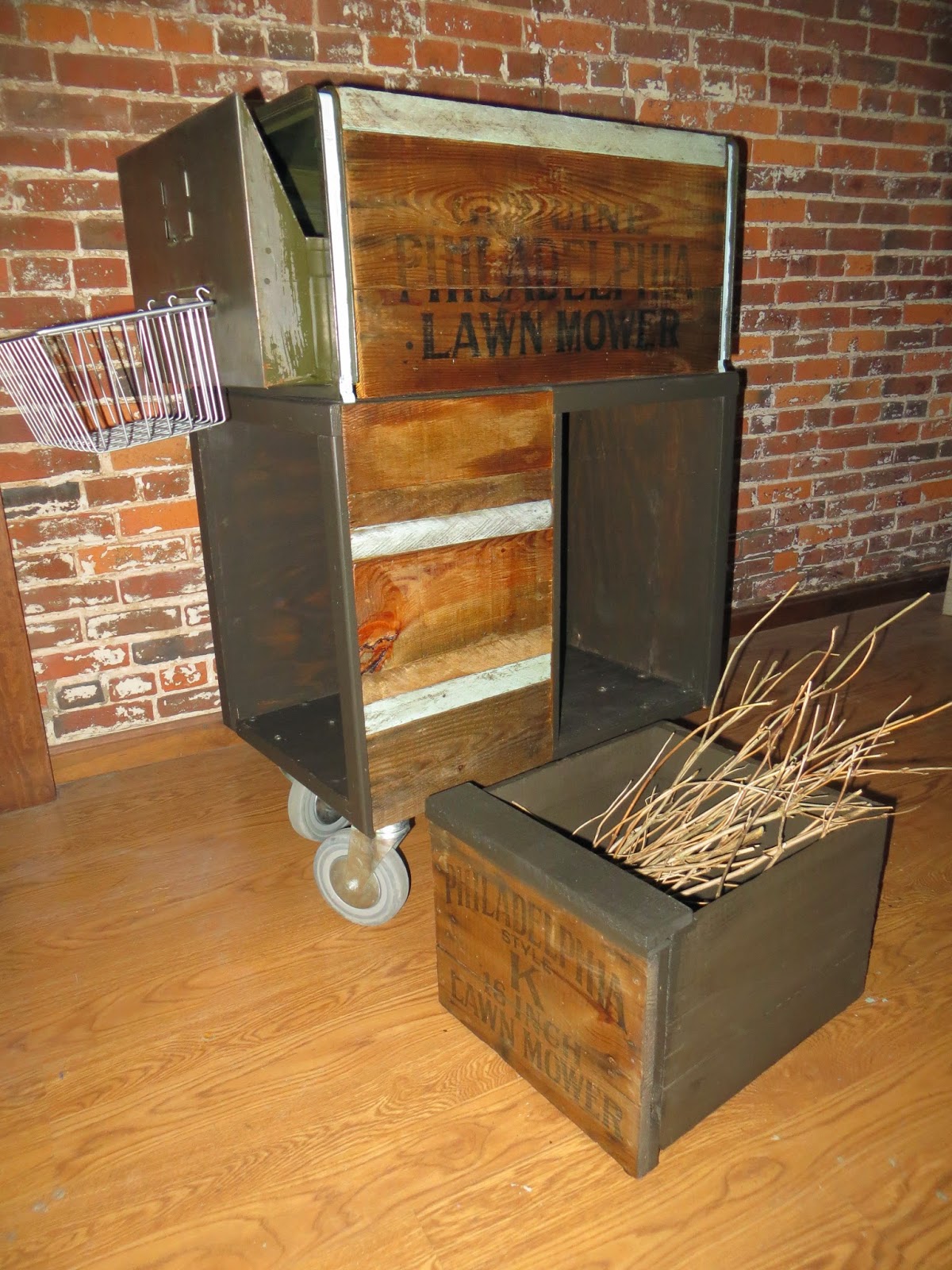 To see the reveal at The Salvaged Boutique, click Upcycle Challenge Reveal {The Party Cooler Cart}  Kathy and her crew did an awesome job on their Party Cooler Cart. Neither of us like deadlines, but were equally excited about the opportunity to work together. Thanks, Kathy! We had some remarkable similarities, even though neither had a glimpse of what the other was doing aside from the teases.

The above is only a furniture reveal. My real revelation is that I was blessed with the very best family in the world. My children and their spouses are the best parents I could ever dream of. No Mother's or Father's Day tribute could adequately elaborate all the lengths they go to for their offspring and each other. We all took turns sharing* little "Big Sister Emilia" age 2+ during this emergency (*as well as the in-laws).

Right now, my cup runneth over...

Linked to The Sunday Showcase No. 245 at Under the Table and Dreaming