Flying without a net

This post is neither about flying, fishing nor acrobatics.  It is about having more confidence in yourself than you have a right to, and plodding on without a compass in a sea of quicksand.  That said, here are today's presentations:

A friend asked me to perform some magic on her son's desk.  I don't know the history on it, but his name starts with an "H" and there was a deeply carved "K" on the top, right near the front writing surface. That eliminated refinishing the top in a wood finish and painting the rest of the desk black, which was the request.  Bondo is the best woodworker's aid in having to fill holes-better than any wood filler out there. And it worked.  The "K" is no where to be seen.  There is a sculpted wood trim around the edge that took the stain nicely, and I though that would be the token wood finish.  Here is a before: 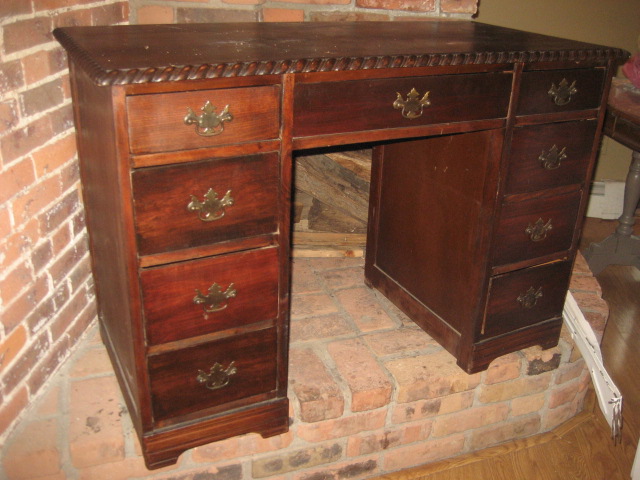 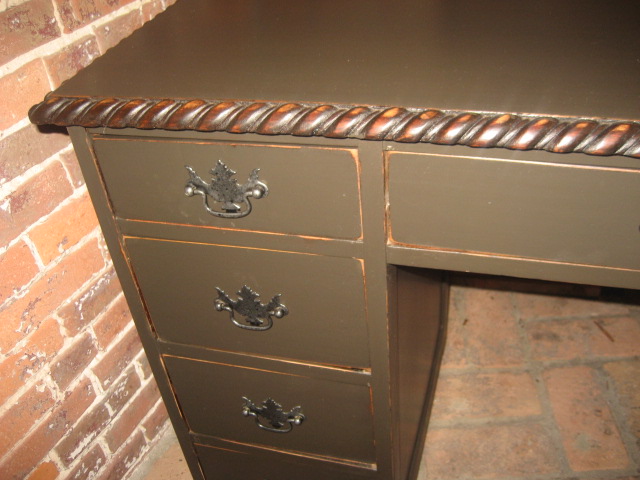 The lighting makes it appear to be a deep brown, but it is a deep charcoal, called Stealth Jet by Behr. 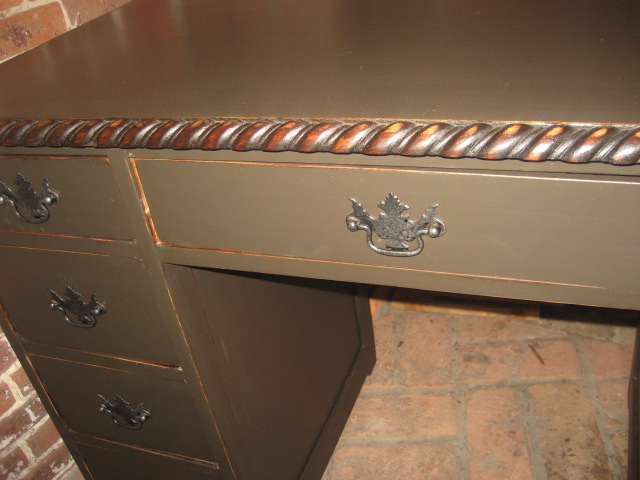 The more I thinned it the better it went on with barely a brush stroke.  One of these days, I'll gift myself with an electric paint sprayer, but until then, this will be my method. 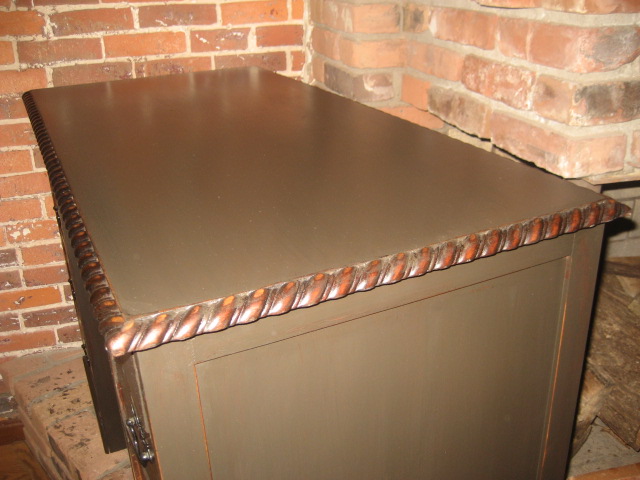 This is a really neat desk-a lot of trim molding and even the back is finished. 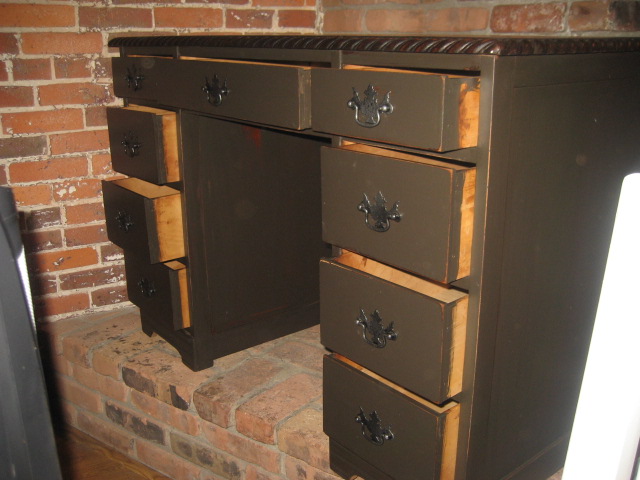 Truer to the color, but still much darker.  I sprayed the handles in quick succession with a pewter hammered paint, followed by black, which gave it a nice mottling.  Now, it has to cure for a few days and it will be out the door.

The next piece was something I got (happily) talked into at a house sale.  It originally had a top that spun around which made no sense.  As it spun, it show the unfinished rectangular base. Still, I thought it a workable piece.  First of all, we took the spinning mechanism off to use on a project down the line, then I had Paddy tighten the legs. Next, it was painted the same stealth color as the desk.  [Use the colors you love]  I distressed it a bit, stained it and coated it with a poly.  The top was a bit snaggled so I Bondo'd it, sanded it, and glued the loose parts-firm as anything.  Then it sat, until Alisa said (not even having seen it), "Why don't you Pottery Barn it?"  That mean't attaching a faux leather with 3M' Super 77 adhesive (this is not a paid testimonial).  Let me show you the BEFORE before I go any further: 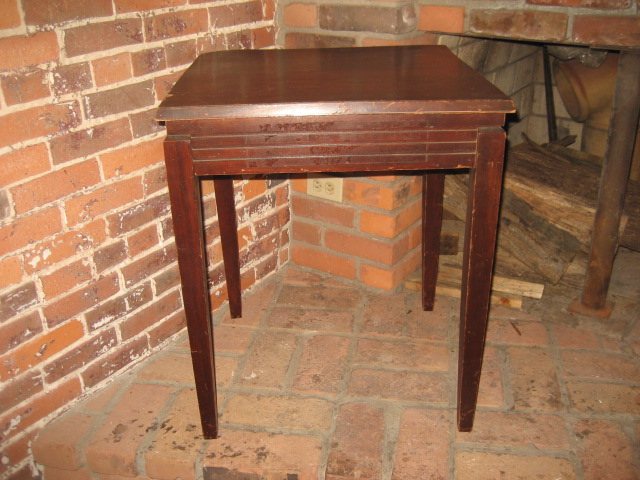 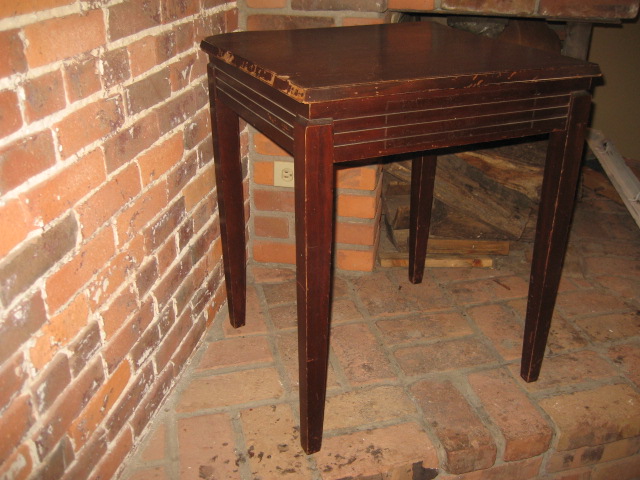 Look at the alligator teeth on the left side. 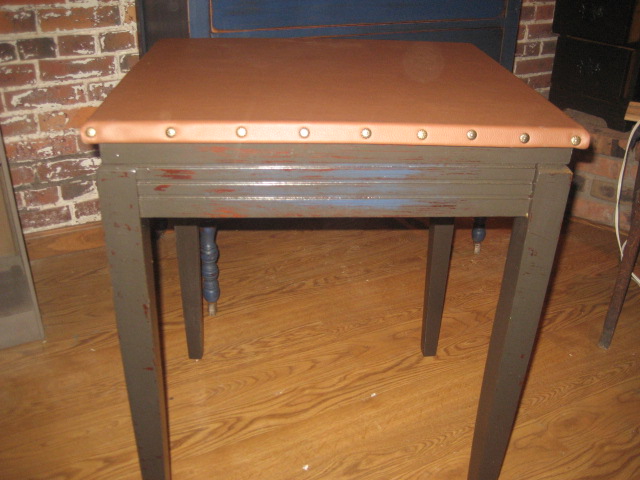 This is the look now, and yes, I did put a smidgen of the sapphire paint on the sides, as there was no one nearby to rip the brush out of my hand and stop me from doing it.  I may change it.... 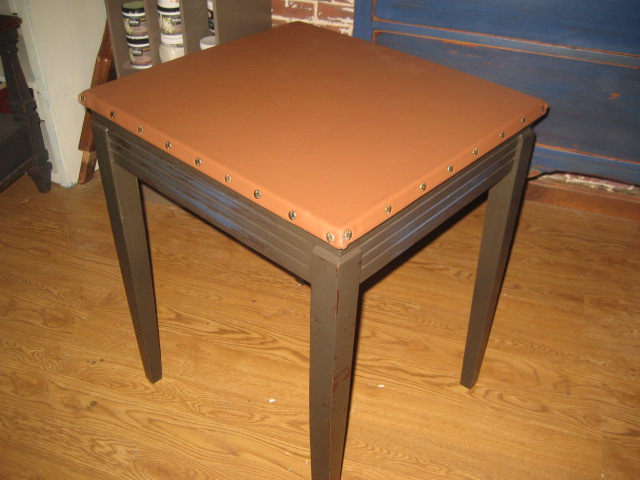 Okay, now look at the top.  I fit the fabric so it covered the edges in a couple inches, marked the inside and sprayed the 77.  It is a strong adhesive and you don't have much 'play' time.  It also needs to go down in the exact spot, unlike wallpaper that can shift around a bit.  Then I took a plastic food spatula and worked the top of the 'leather' from the inside toward the outside.  Like 'buddah'. It turned easy and layed down pretty well on the other side.  I used very few staples, just at the corners. 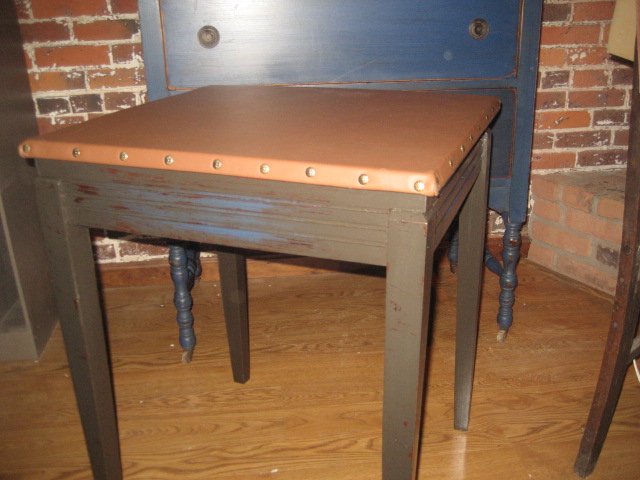 [See how nice the blue tall boy looks behind it.  Forgot to list it the other day, if you were looking for it.] 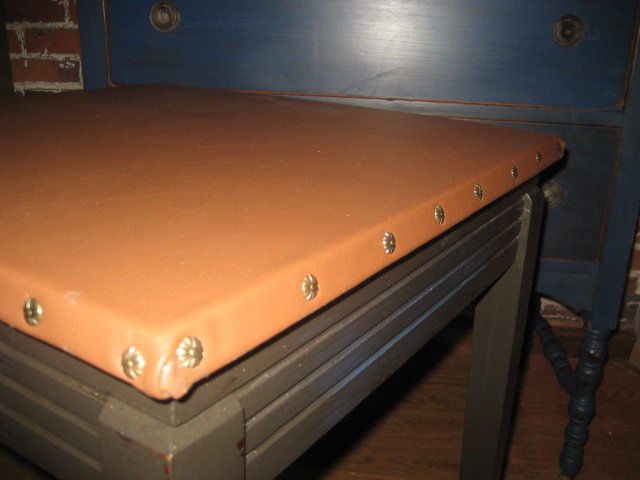 Next I measured where the brad tacks would go and marked each.  Do you ever notice that whenever you try to put tacks on something you have to throw every third one away.  Well, nuts to that!  I used an awl and gave it a couple of hits on each mark before I put the tacks on.  Only ruined 1 tack and that was before I went with the new method. I figure the tack is too long and narrow to take that much hammer abuse, why not let the awl act as a pre-drill. This will be on C'list tonight.

I have a million things to do the next few days so I won't post until Sunday night, but I think my next projects are going to be really CRAZY.  I looked at a couple of pieces in my garage that are just begging, "ME, ME next!" And believe me they have ISSUES!  I am in great need of FUN.  Real fun. Not the 'fun' kind.....

"If you're lost and alone, Or you're sinking like a stone, Carry on.  May your past be the sound of your feet upon the ground, Carry on".  [One of my new favs from the musical group, fun]

PS  That remark about flying without a net....whatever project I'm involved in, I plunge ahead as though I have all the knowledge and skills necessary for the task.  Nothing could be further from the truth.  [Ouch, that cliche hurt my fingers to type]  Every day I dive headlong into things I have no business even attempting, but most times-they are successful.  I bet a net would be fun.