One day, many, many years ago, I left my house with the intention of doing something really bad. Really, really bad. I worked up in my head that a wrong needed to be righted and I was the one to do it. I got in my car and turned left out of my driveway.  As I came to the stop sign at the corner, I found that with all my might, I could not turn my car to the left.  Again, at the next stop, no left turn. And again. And again. I could only make a series of 'right' turns. As it turned out, the only left turn I was able to make was back into my own driveway. I was furious. How come my vehicle was not obeying me?  What was wrong with my steering? As I barreled into the house, I caught sight of a picture on my wall of Jesus, in the Garden of Gethsemane, and below it was the framed sheet music to Amazing Grace. My eyes centered on the words to the third verse:

"Through many dangers, toils and snares,
I have already come.
'Tis Grace that brought me safe thus far,
And Grace will lead me home."

Grace did lead me home, and saved a wretch like me.  I never felt it necessary to pull that stunt again.  Who knew what kind of strong-armed enforcers 'Grace' had that would prevent me from my left turning ways, next time?

Tonight's Sunday Song is Amazing Grace.  Although we sang the Chris Tomlin version about the chains, I have always preferred the simple, raw, angst ridden version with no 'pop' variations.  I found something close in Judy Collins' acapella offering. The lyrics were written by a former slave trader turned clergyman, John Newton, after a spiritual conversion at sea in a storm. Give a listen:

Quite a few people wondered where I was this week.  "I didn't see anything on your blog."  "Are you ok?" Busy-ness in the area of pillow making, alterations, Irish pin painting, and trying to hustle some things on Craigslist kept me active, but not introspective.  One thing I did for myself, in keeping with my New Year's Resolutions, was that I took a class at MetroHealth called, Managing Chronic Disease.  It was week 1 of 6.  It's a fairly new interactive class, a nice, diverse group, where we work on ways to manage pain, and give ourselves, by making changes, our own best life! The chatter as we were leaving was very positive.  Our assignment, besides reading from a workbook, was to figure an action plan for the week.  We were to choose an activity, list the number of times we were going to do it, time of day, and what we thought the percentage rate of being successful at it. The percent is what makes us 'commit' to actually "doing" it. My action plan was water exercises.  I had belonged to LifeWorks for a year, but gave it up because of the high cost, and the inability to walk after my knee injuries.  Oh, how I missed it.  The getting up in the dark and heading to the pool early so as to frighten the least number of people when they saw me in a bathing suit. That place was the bomb! Fresh towels, shampoo and body wash right in the shower-no need to bring your own. You could even spin dry your suit.  A quick 2 minute loll in the whirlpool, knowing that was the nicest thing you ever treated yourself to.....I called around to all the pools in the area, even hotel pools, looking for the least expensive rate.  The MOST expensive was in my OWN town.  The new 'Y' Rec is aptly named. It is $100. to join and FIVE HUNDRED AND FIFTY SIX DOLLARS A YEAR for membership for seniors.  You read that right-SENIORS.  I thought "Y wRECk my budget joining you, when there are plenty of nice places close by." I joined one today, at $20. a month. On my action plan I said I was going to go 4 days a week, early in the morning, and I thought I would probably have an 80% chance of being successful at it. What a wonderful life.

I did eek out one chair this week, something I had been playing with for a while.  Not sure I'm happy with it yet.  I'm not a grey person. I want to scribble on some more color.  Here is a before: 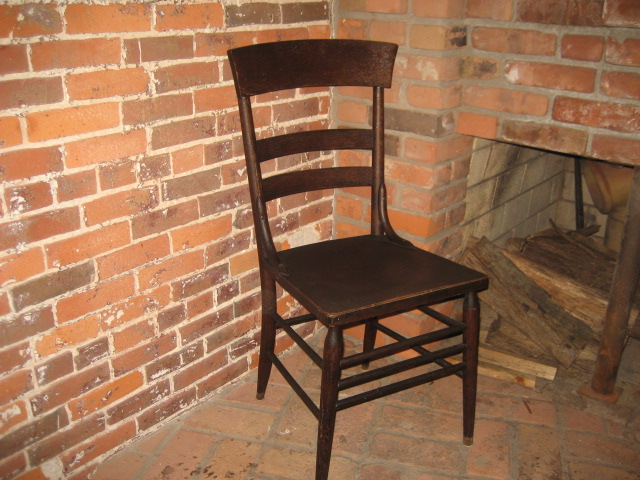 A perfectly lovely chair, sturdy, and I thought I was just going to restore it, BUT... 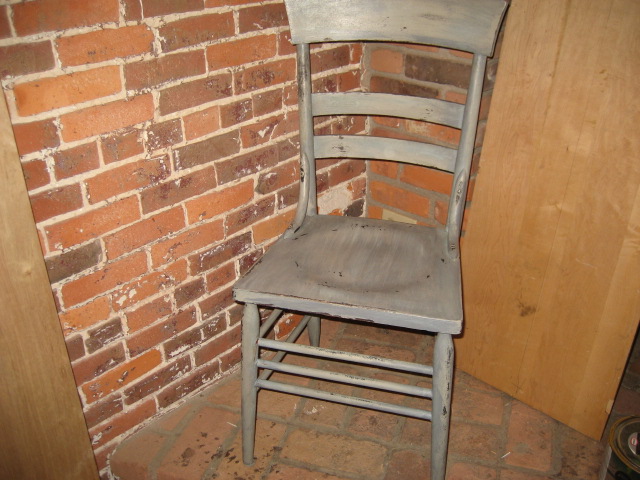 I told Paddy to paint a base coat on the brown chair and this is the one he thought I meant, SO... 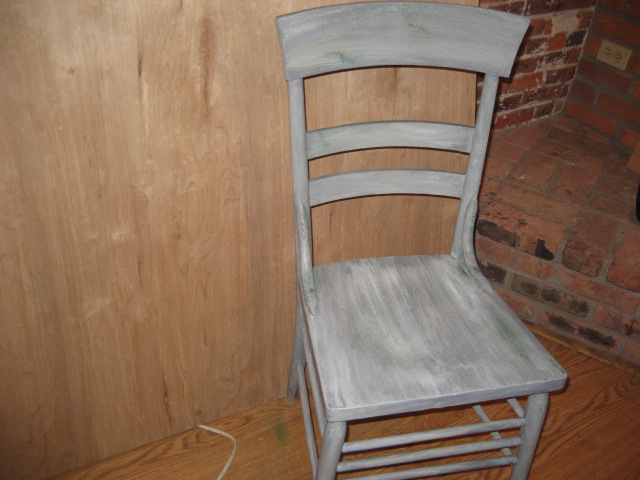 It started off sort of a taupe-y color, and THEN... 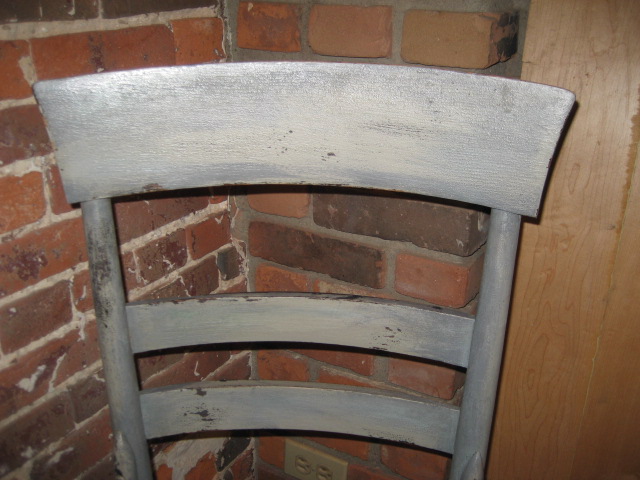 I added some deeper greys, and a new hint of aqua, and THIS... 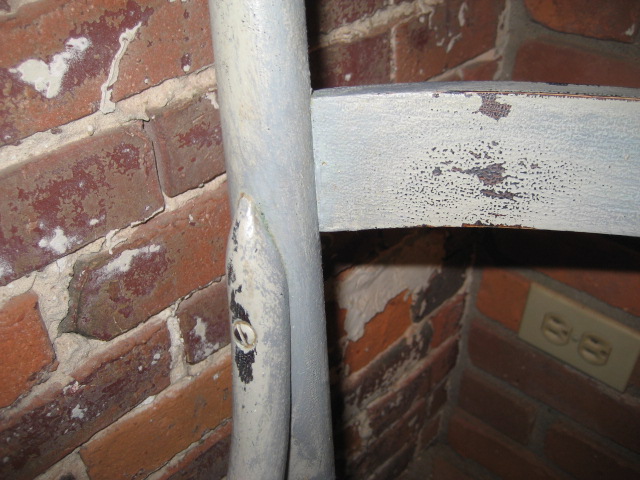 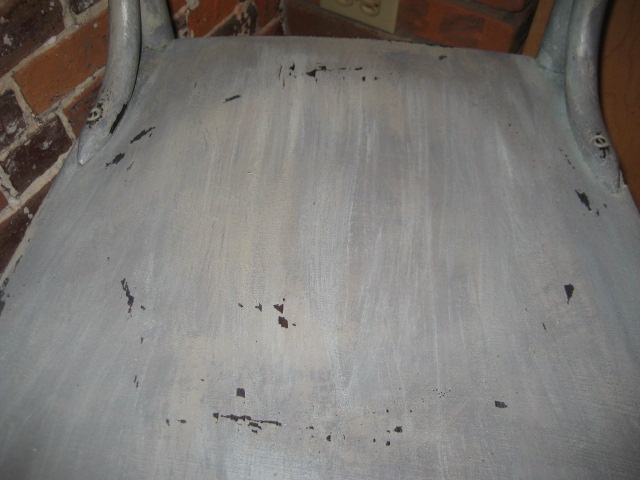 I accentuated the areas where a posterior would give it a workout. 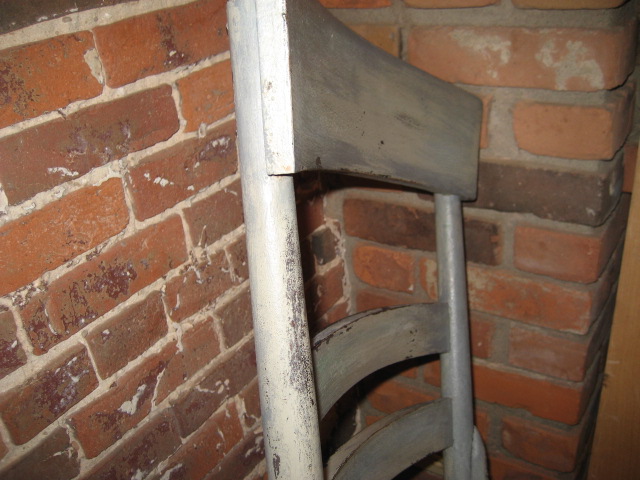 A little side view after distressing and waxing and buffing.

These are some of the pins I worked on this week.  I got some pretty nice orders from people in town who have followed me on my blog through Craigslist, and mailed several pins out of state. 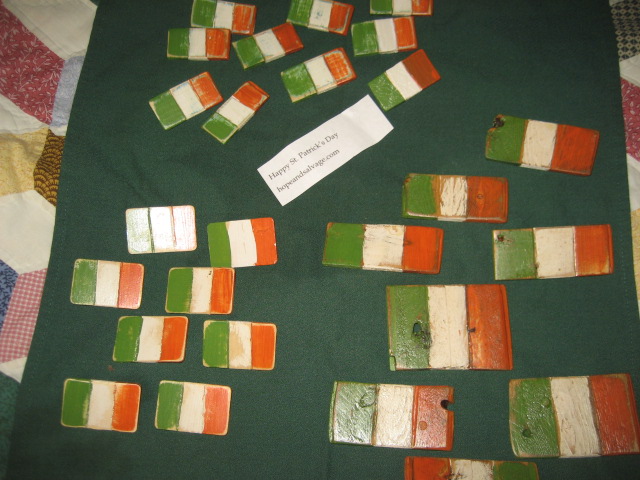 I have another idea for something to sell at my table.  Although I would love to pass out Slyman's corned beef sandwiches, not gonna happen.  Think something SWEET! 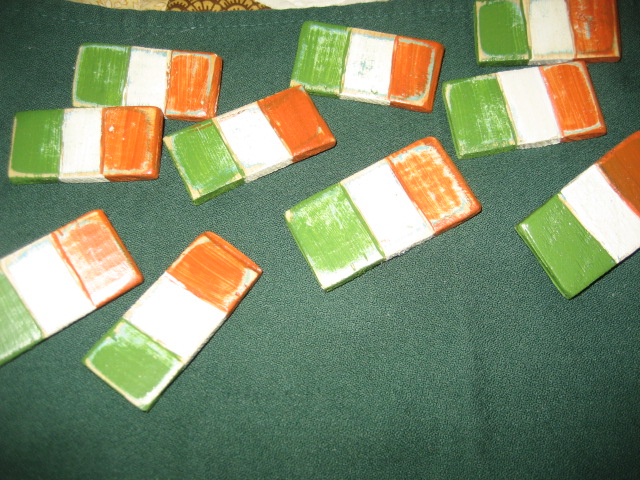 I wonder what my grand total will be....any guesses?

When I was but a wee lassie, one of my sisters sprayed a powdered poison in my eyes that was used to kill aphids on rose bushes. It left me quite sight impaired for a few years. My 4 and 5 year old pictures all are of me, in black, wire-rimmed coke bottle glasses.  I seldom think of it anymore, and only need glasses now for driving. [Or, for throwing in the Post Office mail chute accidentally with my mail.]  I did reflect on it tonight when I was reading the song lyrics:

"Amazing Grace, how sweet the sound,
That saved a wretch like me.
I once was lost, but now am found,
Was blind, but now I see."

See you later....and do the next "right" thing
La Verne
hope&salvage