"Puppy's got a Yin-yin" and other dog stories

I woke up early this morning with the memory of my 4 year-old self. I was running to put on my tennis shoes so I could kick the sheriff who was putting our badly mangled dog in his cruiser. "Puppy" had tangled with a wolf in the Minnesota foothills. The sheriff was taking our dog "to the farm". A 4 year-old doesn't know that "to the farm" and "buying the farm" are synonymous with "pushing daisies." The only other reminiscence of that dog was when he brought us some sort of large feathered bird which we thought was an Indian. Decades ago, it was not unusual to see fully regaled Native Americans in feathers near the Reservations. Hence "Puppy got a Yin-yin" seemed illogically logical to us.

I have been dog sitting  a Chiweenie (chihuahua/dachshund) for the past two weeks. If you knew me, you would not ask me to watch your canine. Ever. Other than that early experience, and a two week period when the neighbors gave us a Cock-a-poo in the '70's (involved mayonnaise, throwing up in the car, and scratching a Cadillac), I have no experience with animals. Give me a child, a sick adult, or a dying grandmother, and I will sign on for a lifetime; give me something that barks, craps on my carpet, or wakes me at 5:15 to go potty, and I will say, "you have the wrong girl". I don't do stairs, (but I did 8 times a day). I don't shop, (but when she chewed through her harness, I went to 3 stores to find a new one. She slipped out of that, so I finally braided some t-shirt cords into a collar).  I change diapers, (but when something purposely rolls in shit and requires a bath-the remnants should not look like I shaved a gorilla). It was supposed to be a one week commitment, but turned into two. I was anxious to see her go. She was anxious to leave. The End. 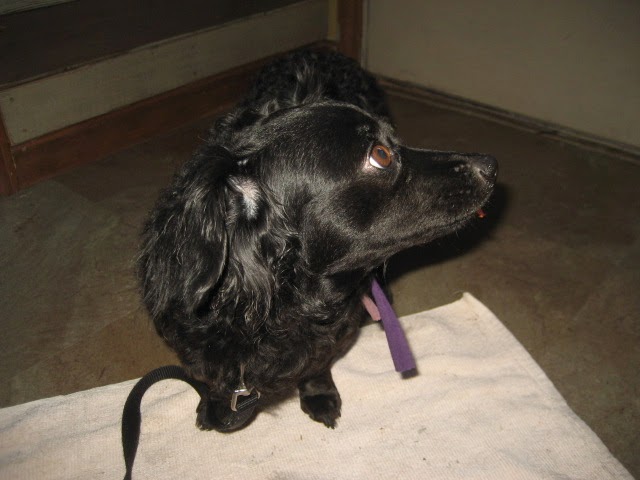 Projects this week:  A Union Jack coffee table, and a 1940's Vintage RCA television into a wine cabinet.