is another family's treasure. 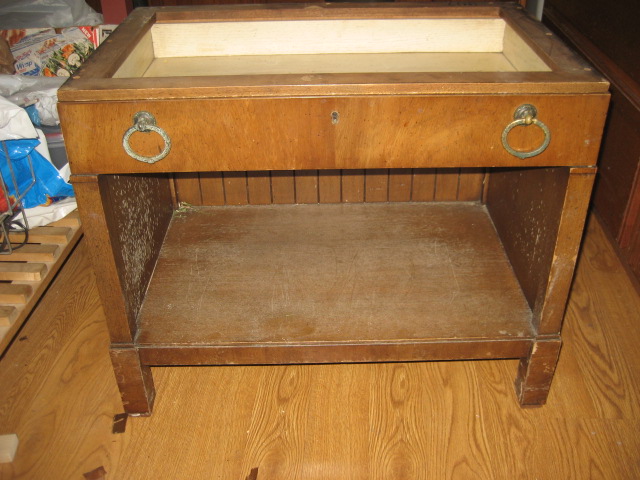 Bethy found this partial end table on the front lawn in Brunswick, minus a top.

It looked and smelled as though it had been stored in someone's basement. 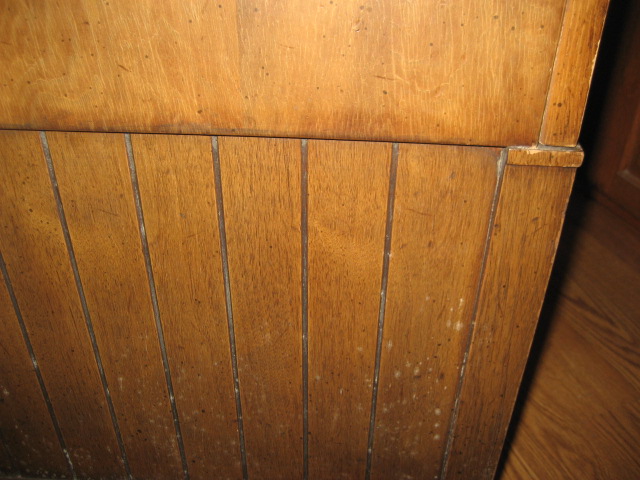 It had fine markings and beadboard sides and interior.

I mixed up sort of a sea green latex paint, after cleaning it well with bleach. 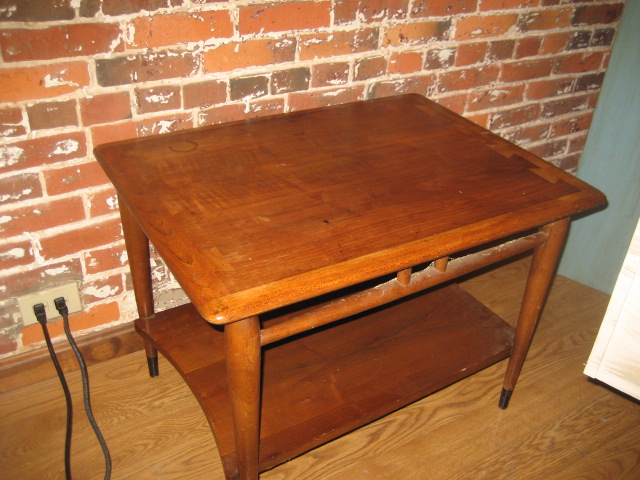 The top I appropriated from a Lane (Ken) table stacked in the garage. 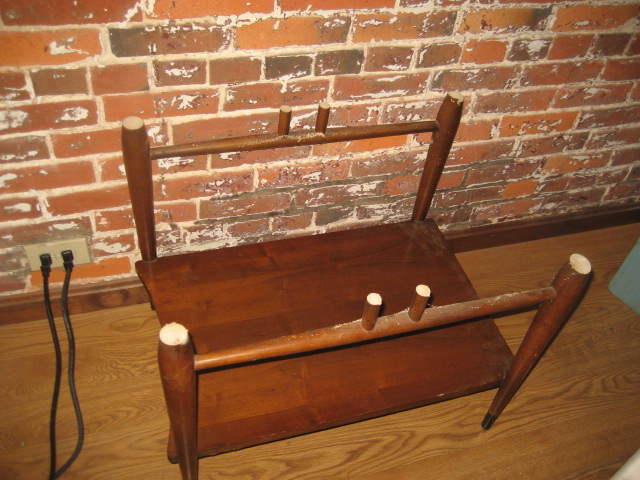 The lower half I will use for a firewood holder this winter. 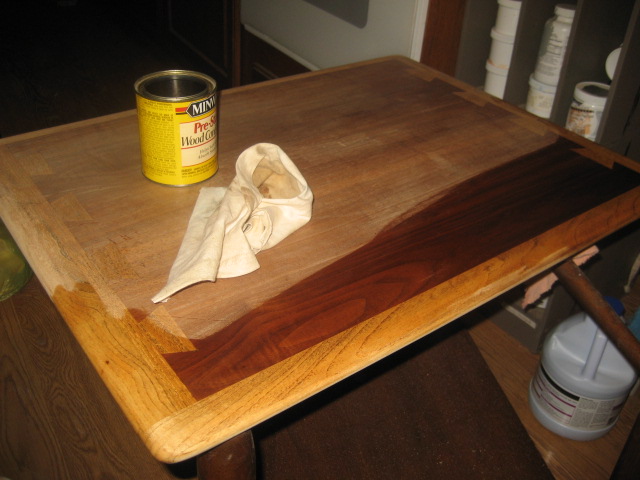 After stripping and bleaching the stains, it was ready for a pre-conditioner, so the wood would stain evenly, and some walnut stain and poly. 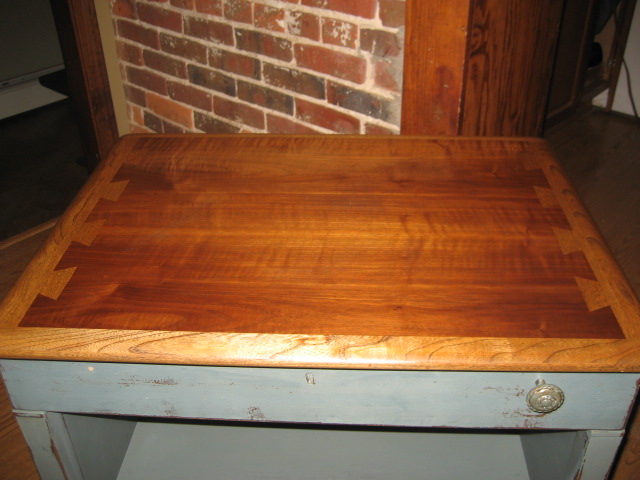 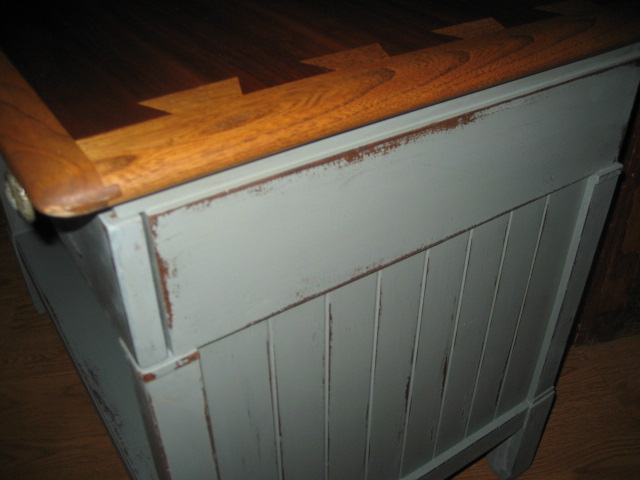 The distressing and glaze gave the end table a warm dimension. 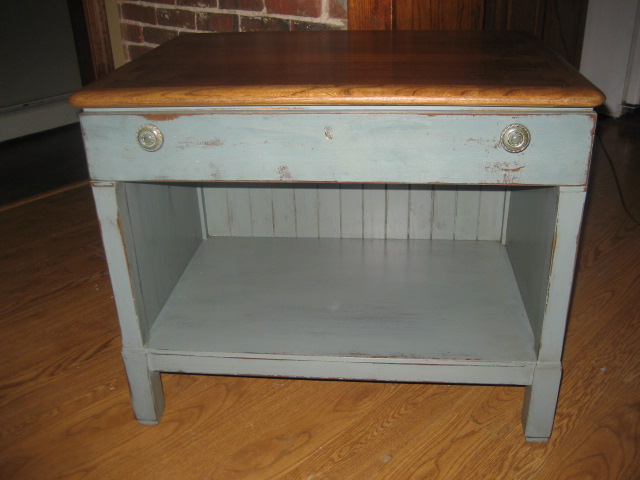 The drawer is large enough for 50 or more Match Box cars. 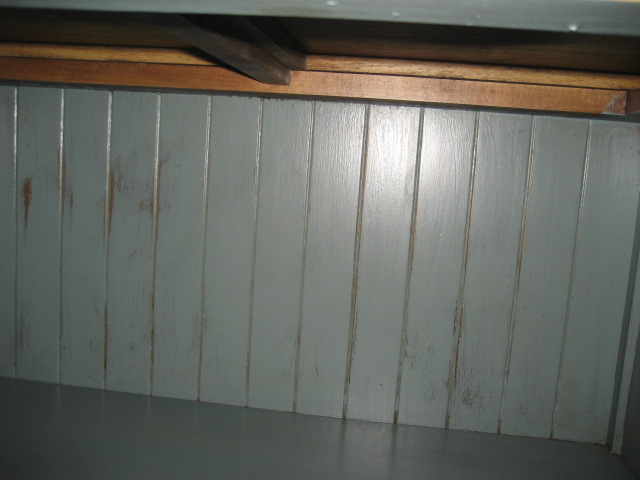 The large interior is big enough for a hefty basket of toys. 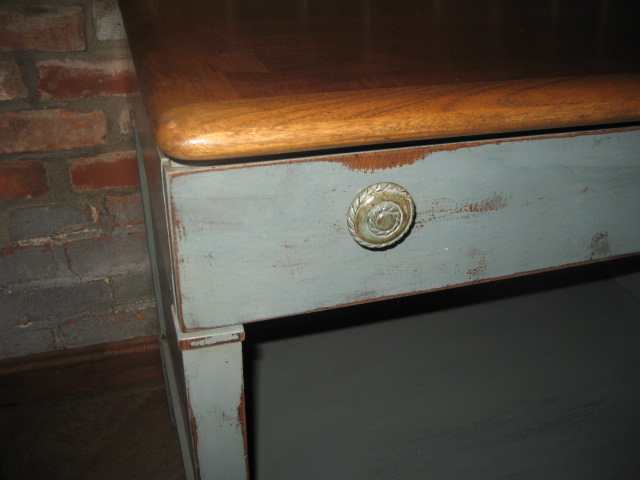 I changed out the knobs for something a little less entertaining for a two year old boy. 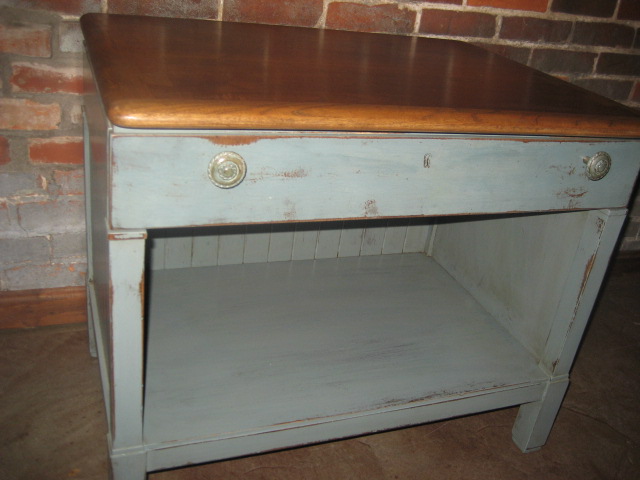 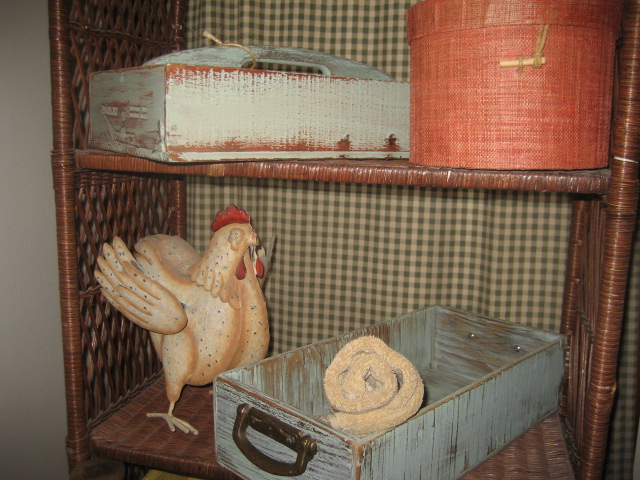 I thought I would show you a couple of wooden boxes that I shabby chic'd before the antique show.
[No longer available] 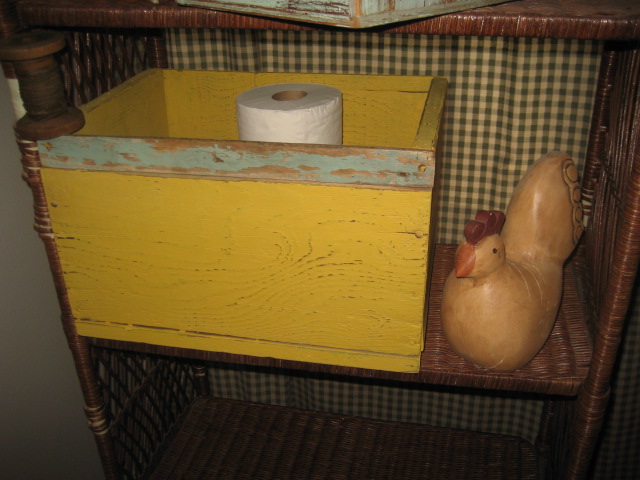 This box gained  a colored lath strip and re-purposed as a toilet tissue holder. [NLA] 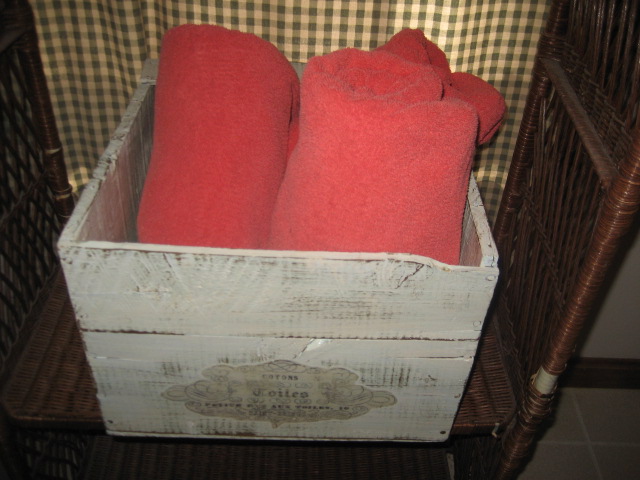 This grainy photo shows a bathroom cabinet that the owner wished to look more formal than this flowered display.

The new, deep Still Water made a statement. 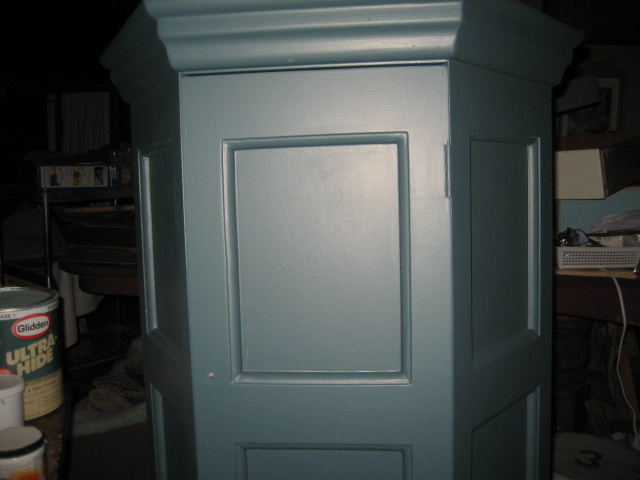 Because the cabinet was made of fiber board, not wood, it could not be distressed,only a dark dry brush. 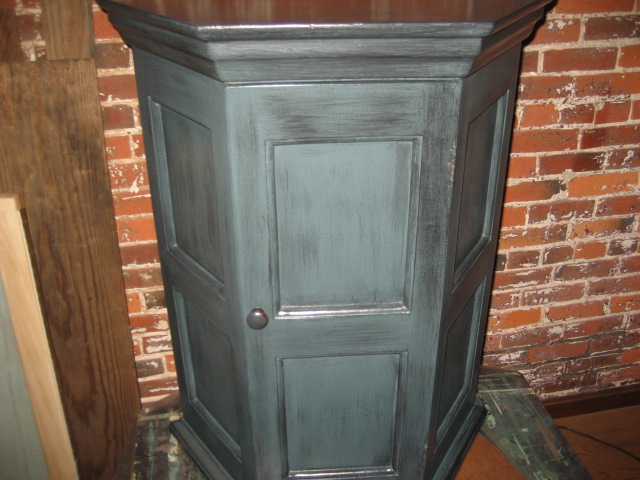 Followed by several coats of poly. 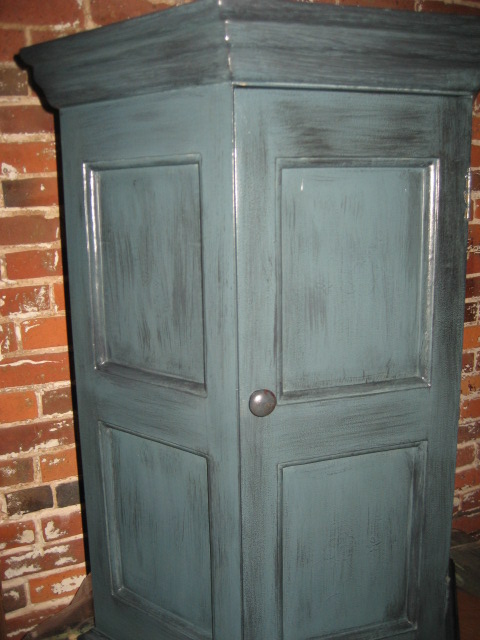 It is important to also paint the interior of a piece if it is too be opened and closed often. 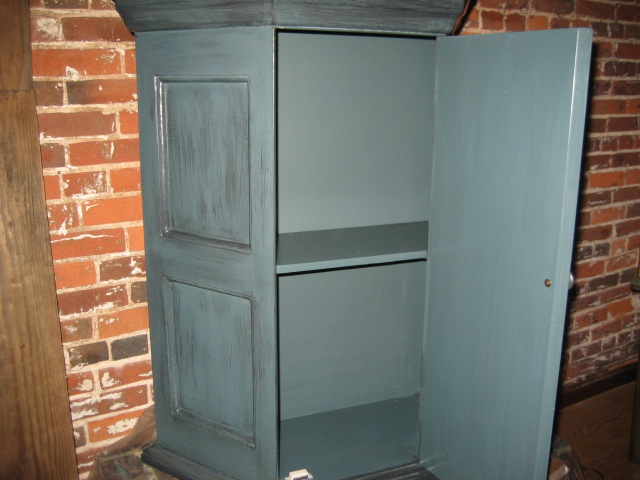 Some details of the crown molding. 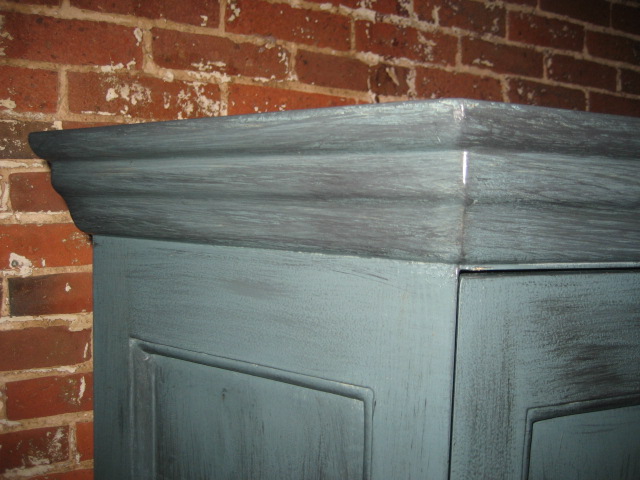 The dark tones are a grey'd shade of Still Water. 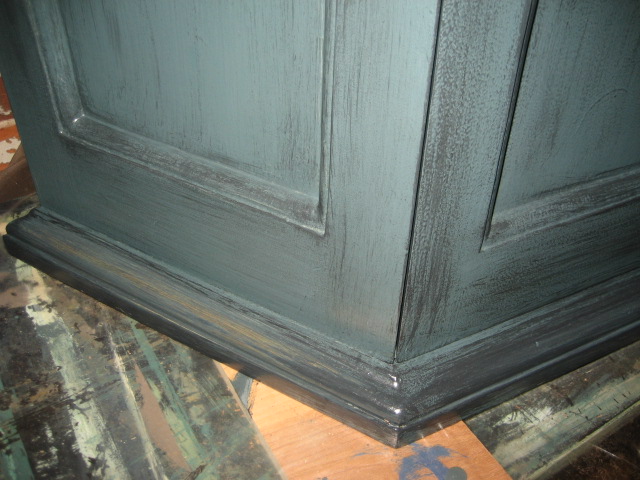 I experimented with just layering colors for the base and think I will do more of that in the future.

One of the best skills I have is my cooking ability. Today, I was able to bribe a daughter to come cut my grass with the promise of scalloped potatoes and ham. And, she brought all the ingredients.  The kidlings did little chores and earned quarters for their service.  I gained all around. Sticks were gathered, leaves were raked, weeds disappeared, my van was emptied, and furniture got moved. It was a nice serendipity from what I had anticipated the day to be.

Sometimes, when I flail around between tasks, it feels as though no progress is being made. Although no furniture projects were worked on today, I felt as though massive headway was made, just by their presence. Thank you, middle child, and your young'uns, for service to your mother, despite post ball playing soreness!