More than just a bench

Do most of my posts start with..."I got this from my friend, Ken?" Well, this one is no different. He gave me this little bench, painted a hideous green, about a year ago. [I think that was a split infinitive. Sorry Dad] The glue on the dowels had departed, and some of the dowels were broken or missing. It had an interesting appeal so I kept it-thinking that some day when I had a L O N G minute, I would put it back together and see who it really was. Furniture does have a personality. Just ask all my creatures that are waiting, unfinished, in the queue.

Side story: Last summer, Ken alerted me to a desk at the end of his street, so naturally, I had to make a trip back to get it. While loading it into the van I could see that in one of the drawers there was a baggie and inside, a post-it note that read, "Evil Desk". A normal person would take a step back and say, "Whoa, these people have back story information that this is an EVIL DESK", and unload their vehicle on the spot. I, however, am trusting of the universe. This desk has never harmed me, and aside from planning to hit it with a hammer, abrade it with a sander, pummel it with an electric drill, I mean it no harm.

I came to learn that the desk did indeed have evil tendencies. My fingers were bloodied while trying to remove ancient flat head screws. This story goes on... Every time I encountered the piece, it was to my detriment. Finally, in deciding to saw it up for firewood, my faithful Ryobi had bounce-backs never seen before. Some of it was used for firewood, portions left for the refuse hauler, and the parts that were recycled into salvage pieces; caused me grief. Warning: If you ever meet an 'evil desk', walk on by.

Andrew started the gluing and clamping process months ago, and then it was abandoned again. When "Not His Real Name Bob" cleaned out the garage, I was mortified seeing it out there, half started, in my newly reclaimed space.  It screamed, "PROCRASTINATOR"! It was time.

This is not an original photo, but close to it. I misplaced the side pieces, so I had to fabricate new ones and drill out for the dowel holes. Bummer with no guide. 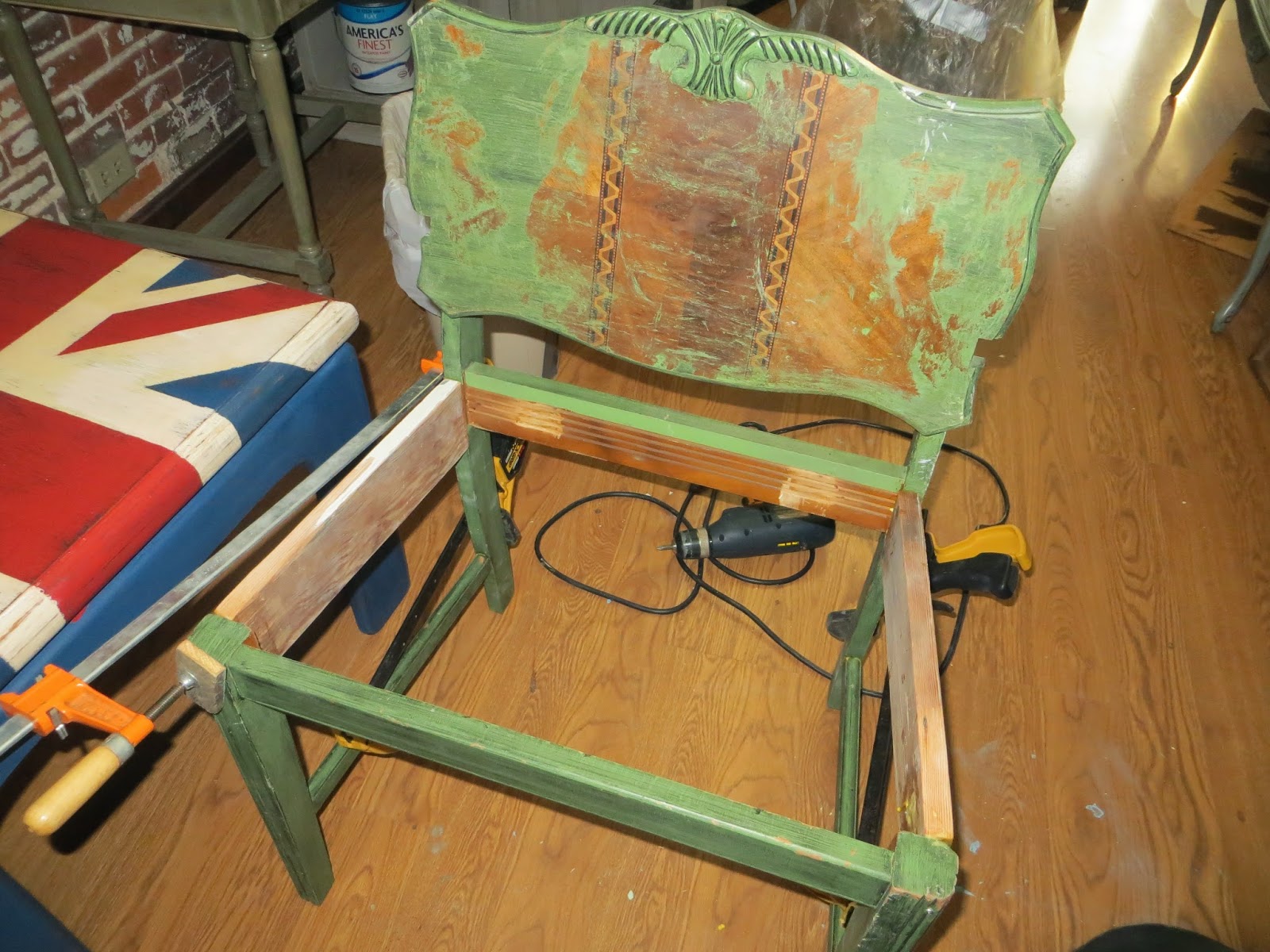 SOME people will say this is the same color as my green sweater, but that is a LIE! This color is awful. 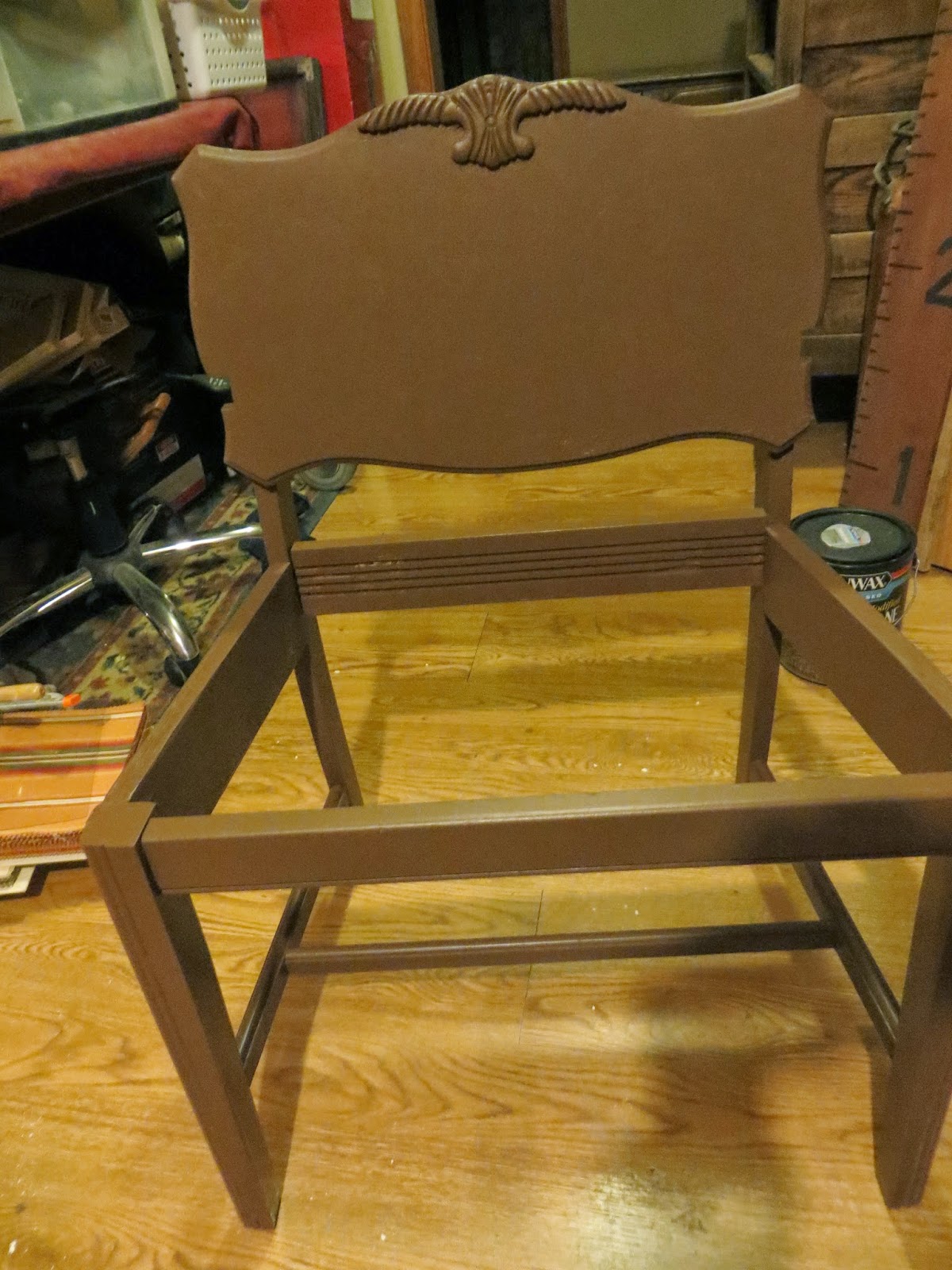 I like to start with a brown primer on pieces where I need a wood tone to show through after distressing.

Stopping for a commercial. I made German pretzels on Saturday for Bethy's World Friendship program and they were delicious. Just a gratuitous look. I changed out a cup of regular flour with whole grain so they were a bit healthier. Just out of the oven, you would have thought you were in Bravaria. 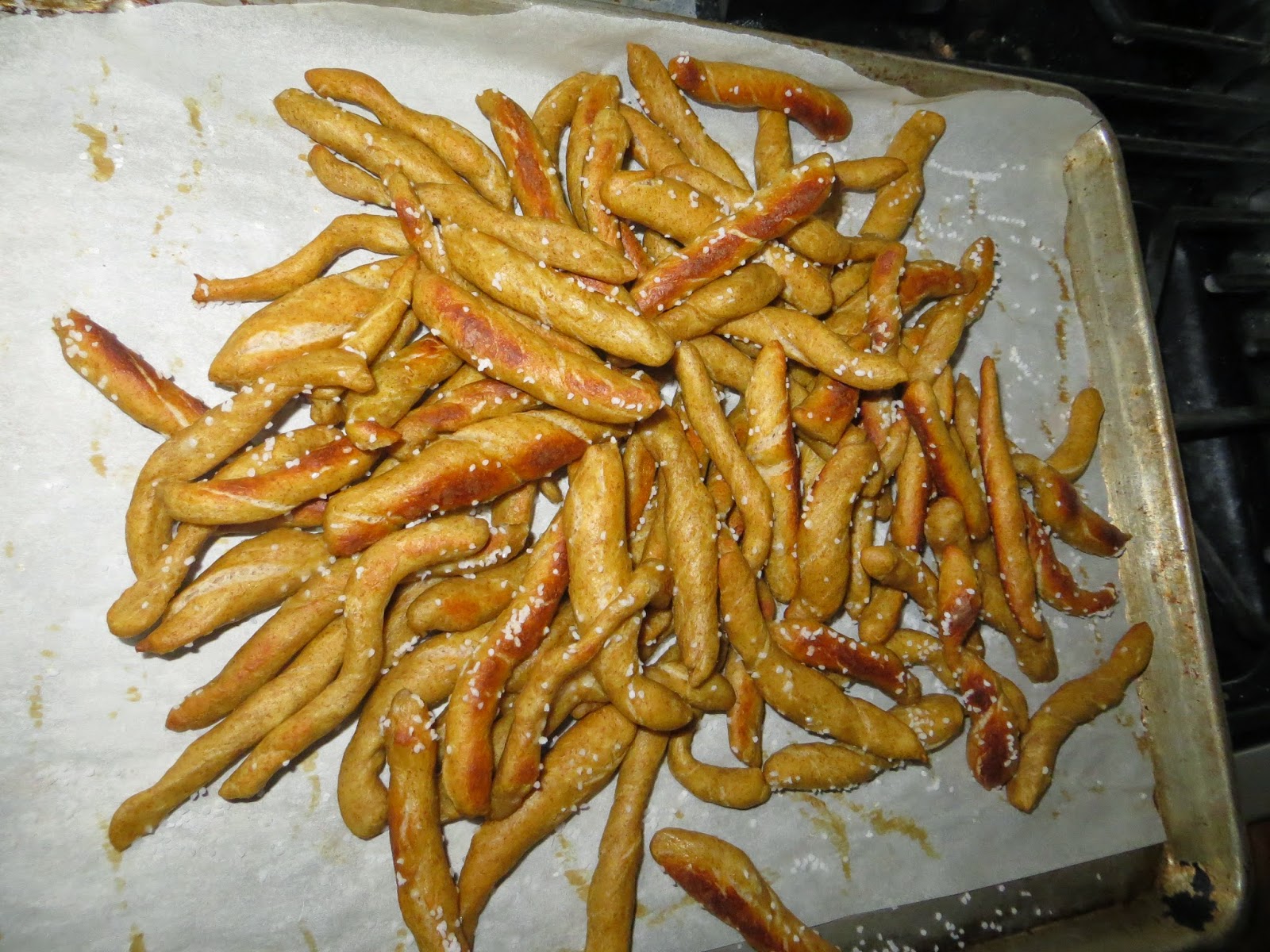 Next, is not a commercial, but a Public Service Announcement. I used my friend, Ed's jig saw to cut the bench seat because my Ryobi cordless saw's battery died and so did the back-up (although I keep them plugged in religiously-especially during Holy Week), and my jigsaw has a really dull blade (from cutting through nails). My point is....the Craftsman Professional is made for a giant's hand. No way even a regular craftsman could hold this baby with one hand. And there is no quick shut-off. The yellow button takes some doing to turn off. Safety! [It would be a preferred tool to have in hand at a home invasion though] Although I am not a segregationist, I believe women should have their own designed tools. The grip should have the same torque, but be designed for a smaller hand. And the heft should be substantial, but not the weight of a pot bellied pig. We have toted our children, and others' all over kingdom come, because that is what we do. Our 'recreational' pursuits should not have us competing with Goliath to create a piece of art while saving the planet. Just sayin'. 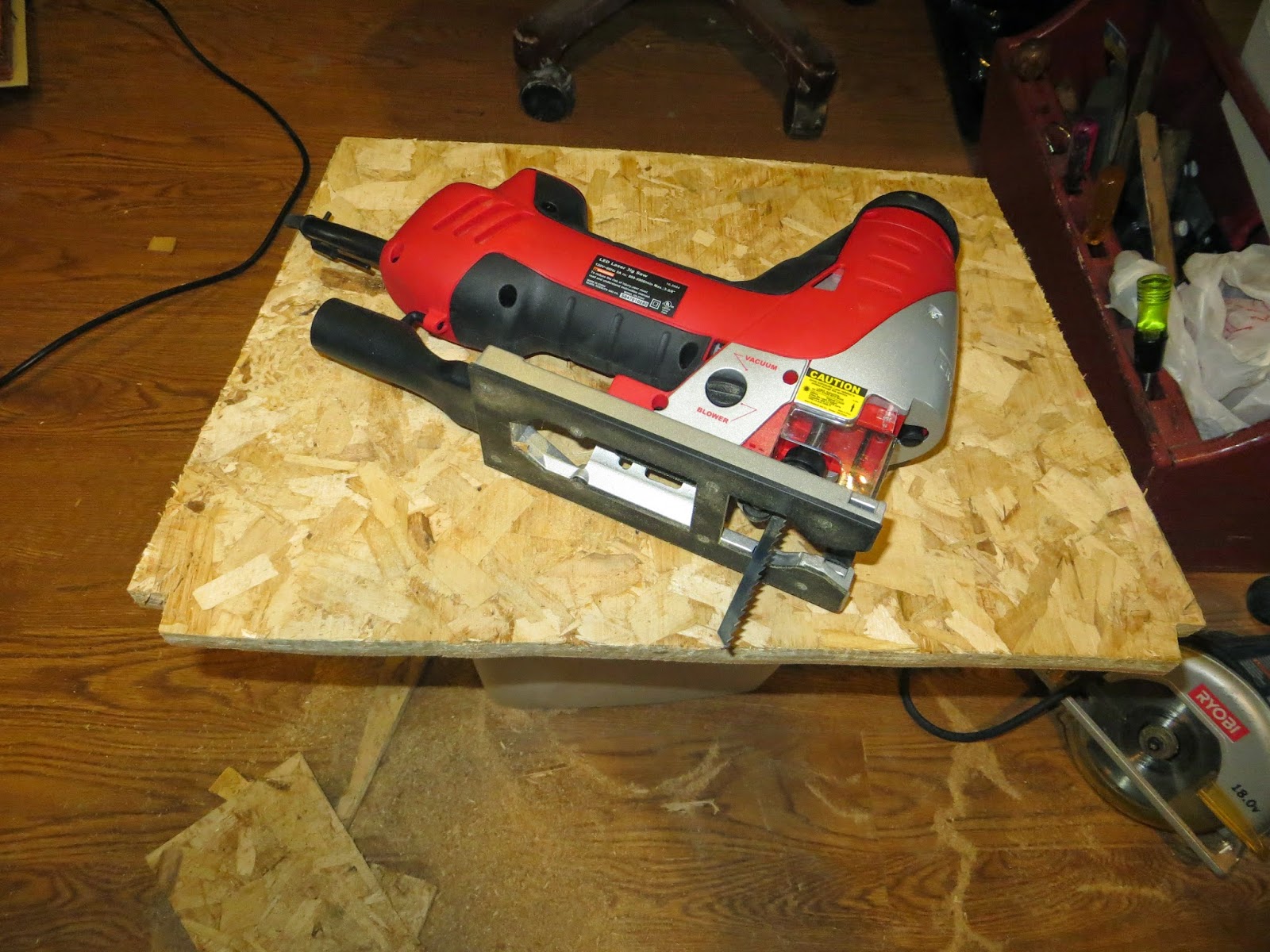 Ok, back to the bench. ( I may have ADHD). Next, I painted it a creamy chalk-ish paint I created using leftovers from other projects. On these small projects I like to use a chip brush. It is easier to wield, and clean up between coats. Love my little garden scoot. It's like having an un-human assistant. 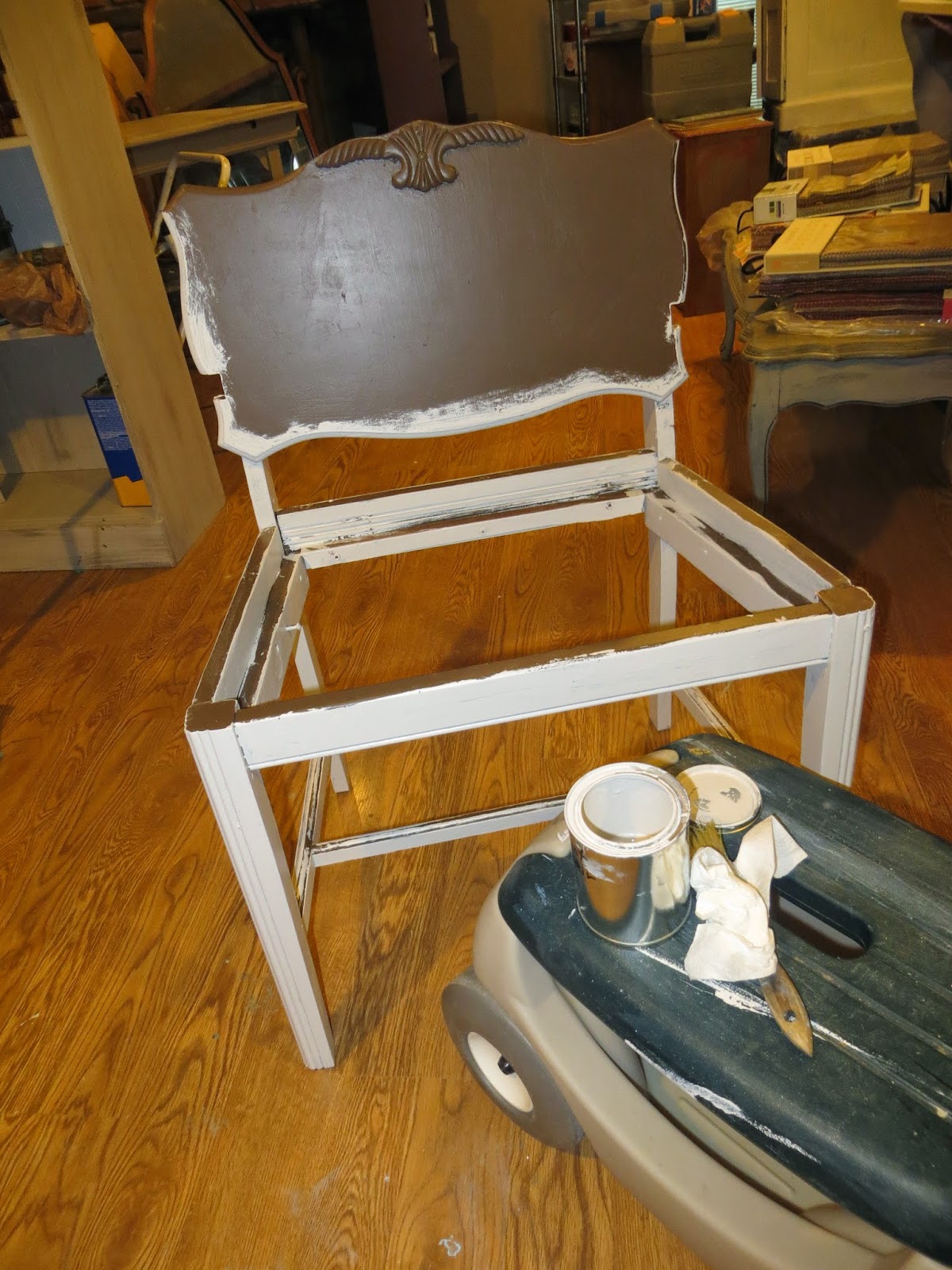 I am rather proud of this view. I have been weaning this room in preparation for an Easter gathering of about half of the troops. The ones that aren't traveling or residing planets away. 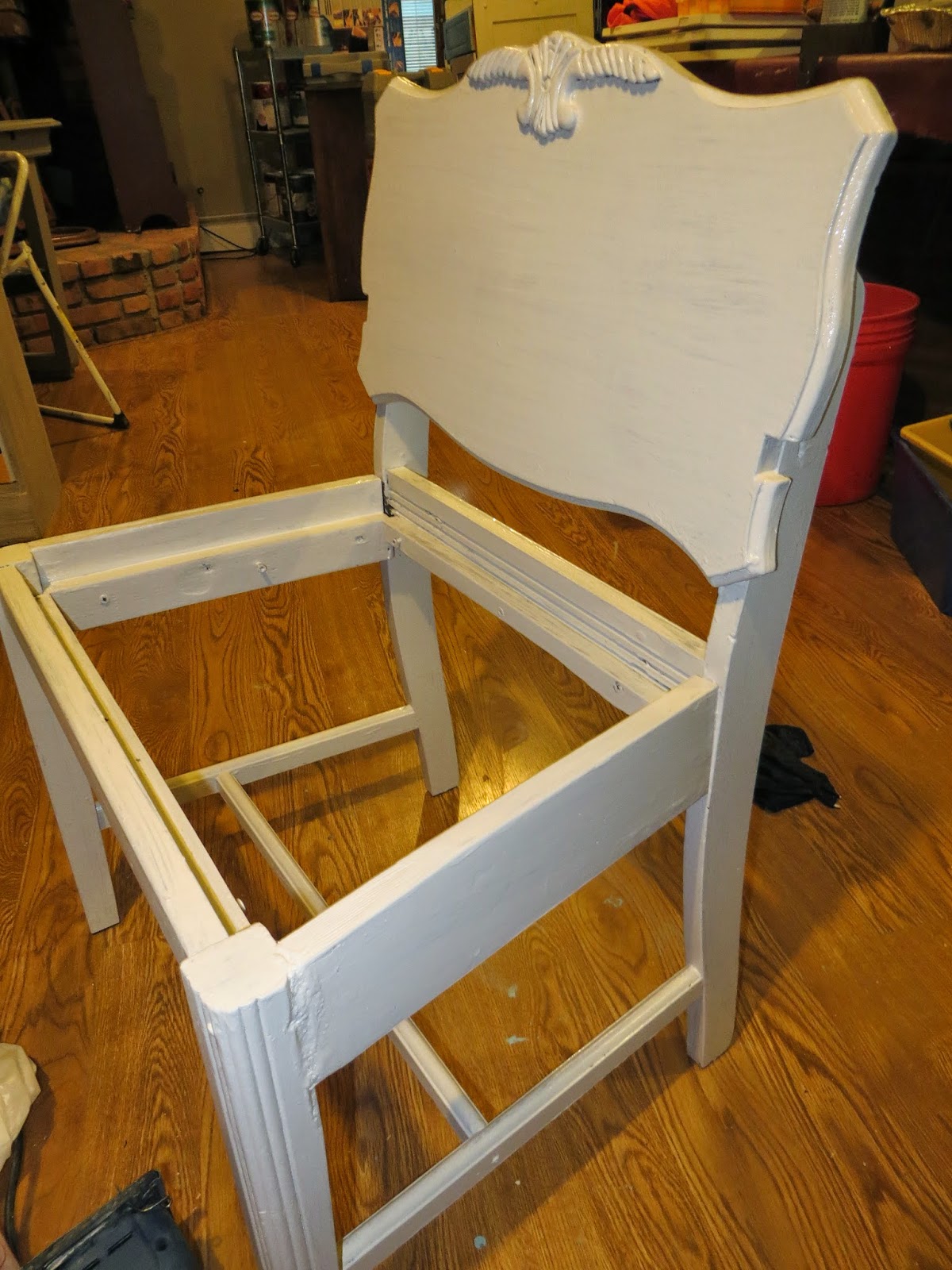 I glazed the entire piece and added a stain in all the groves to accentuate the carvings, followed by a matte poly. 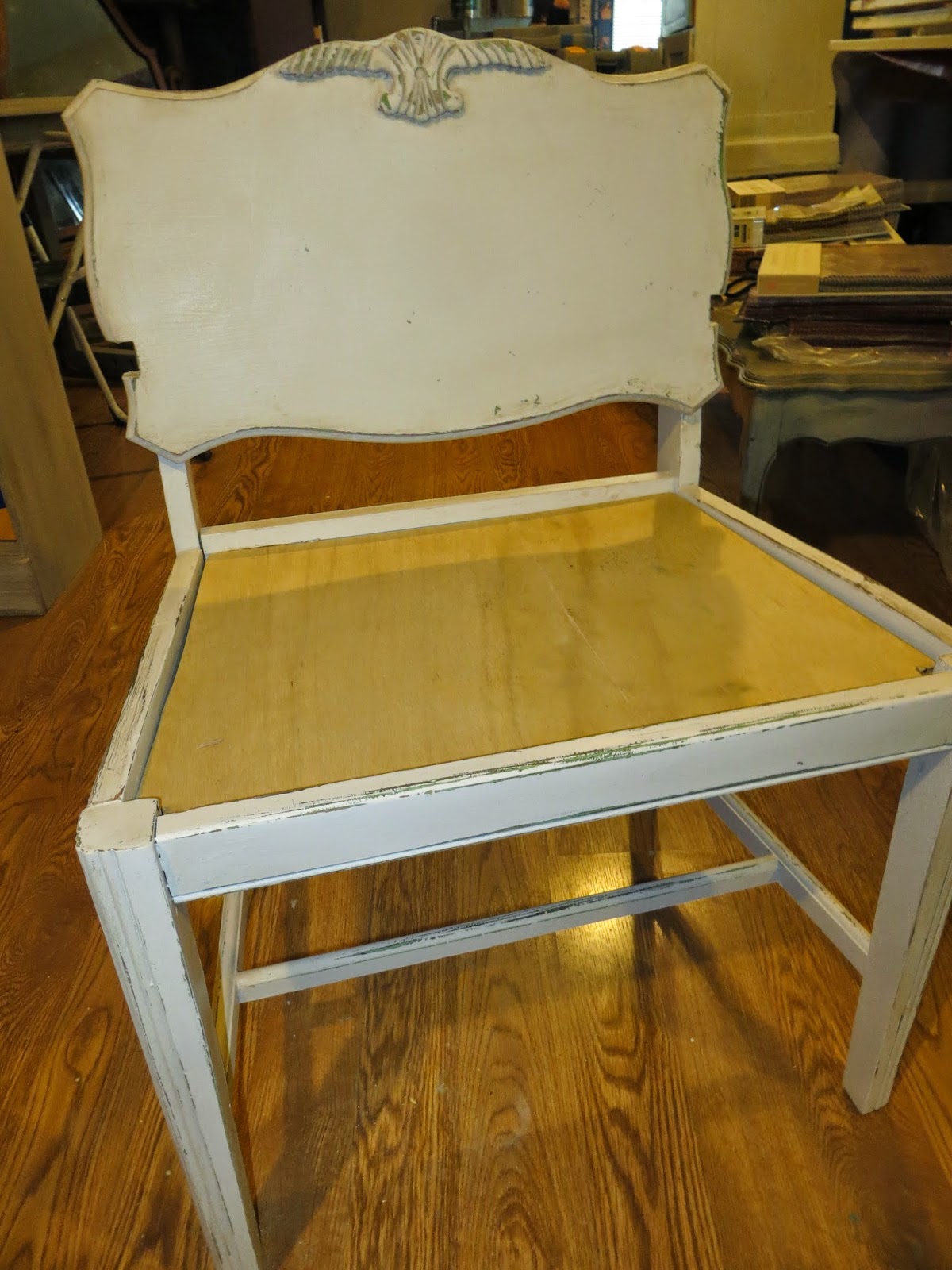 I reinforced the interior so that I had a resting platform for the new seat which I cut from plywood laminated to sort of a flake board. Plenty sturdy. It passed the derriere test. 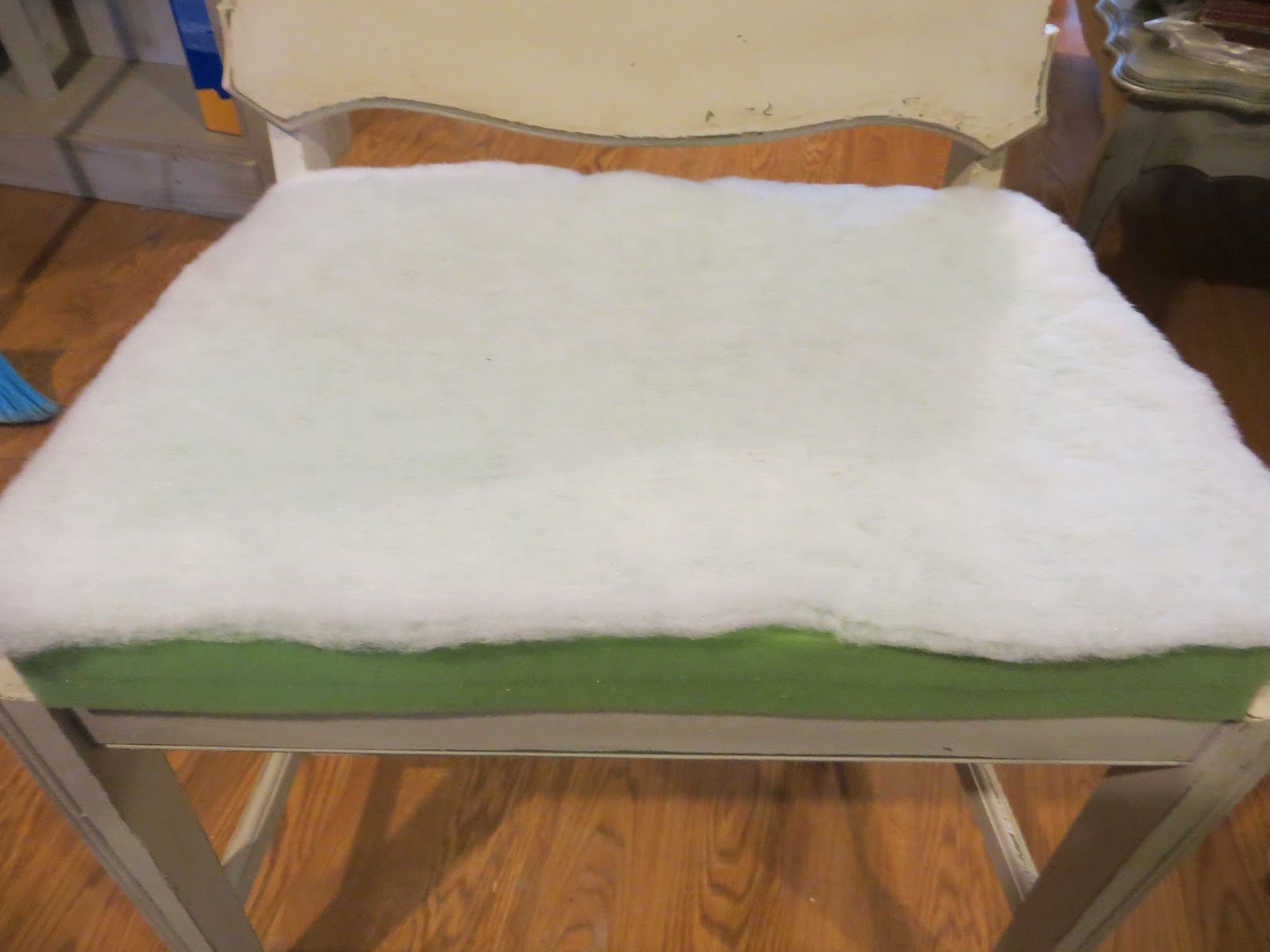 Foam is pretty expensive unless you can get it at 50-60% off. Luckily, I had some in my sewing room. [Who's kidding who/whom? We used to call it the Library, but the last time someone took a book out of that room, it was 2009, and it was the "P" World Book Encyclopedia.] I always add some quilt batting to the top of the foam for a softer seat. It also overlaps the crease at the top all around. A little spray adhesive keeps it from moving while stapling fabric. 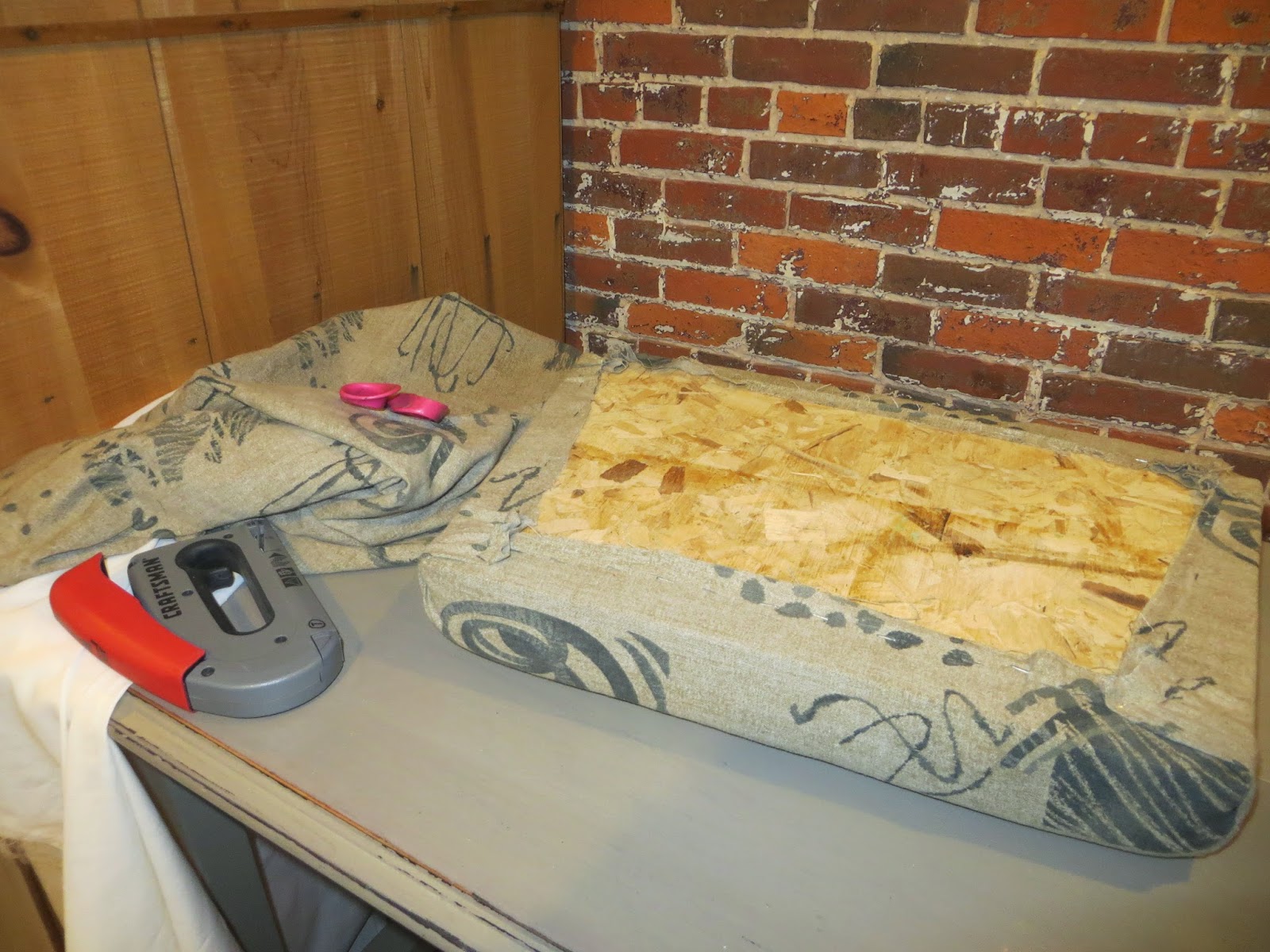 I was looking for something fairly trendy, without breaking the bank, when I remembered some drapes I had made for the Computer Room, that barely saw use. I cut them up and "Voila" the seat looked just as I imagined. 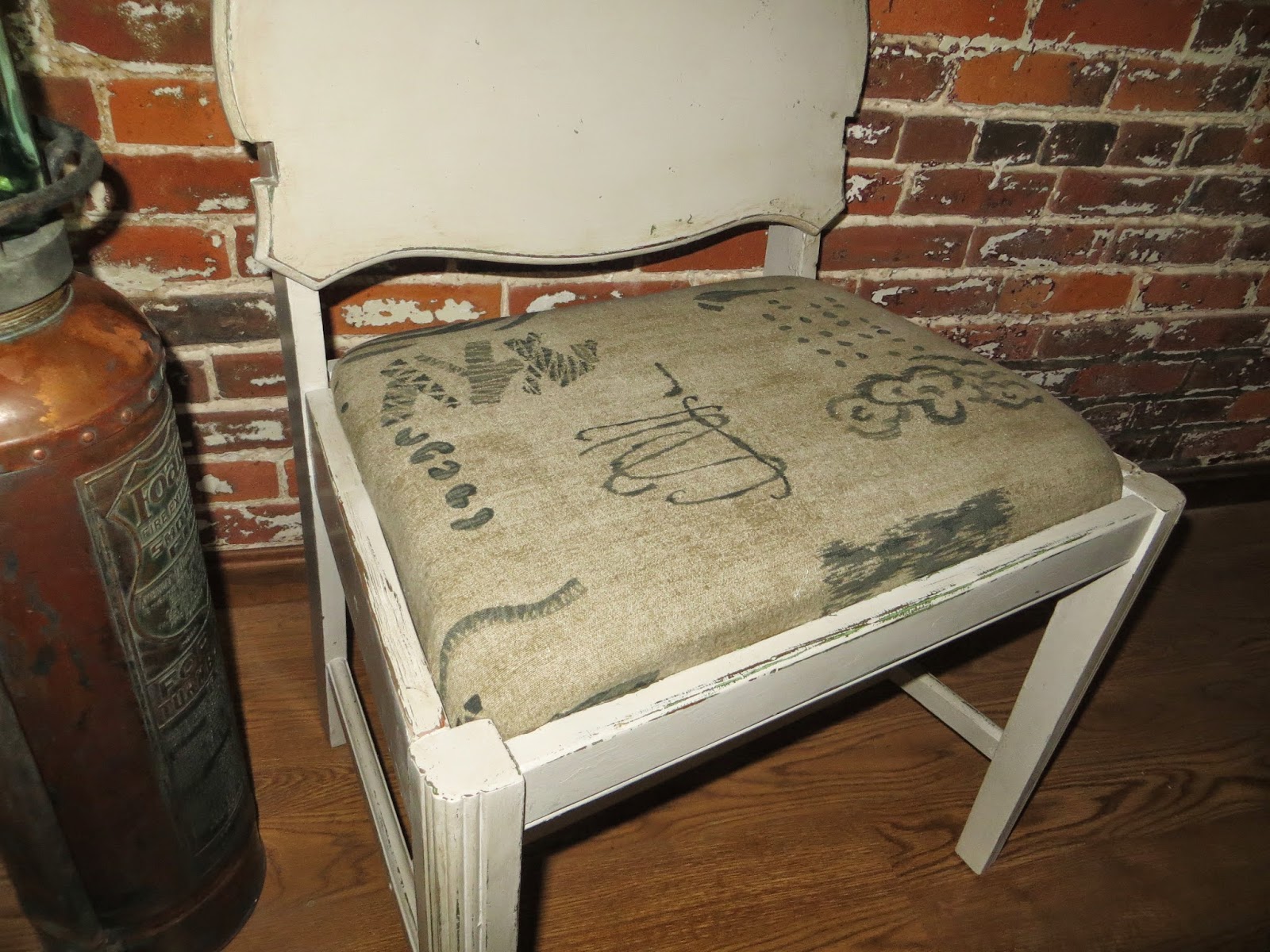 I seriously dislike the feel of burlap. It may be all the rage, but comfort has to count for something. Burlap is itchy. On your face, your legs, your butt. My eyes hurt just looking at burlap. Why use it? This has the look of burlap, but is soft as a baby's rear. 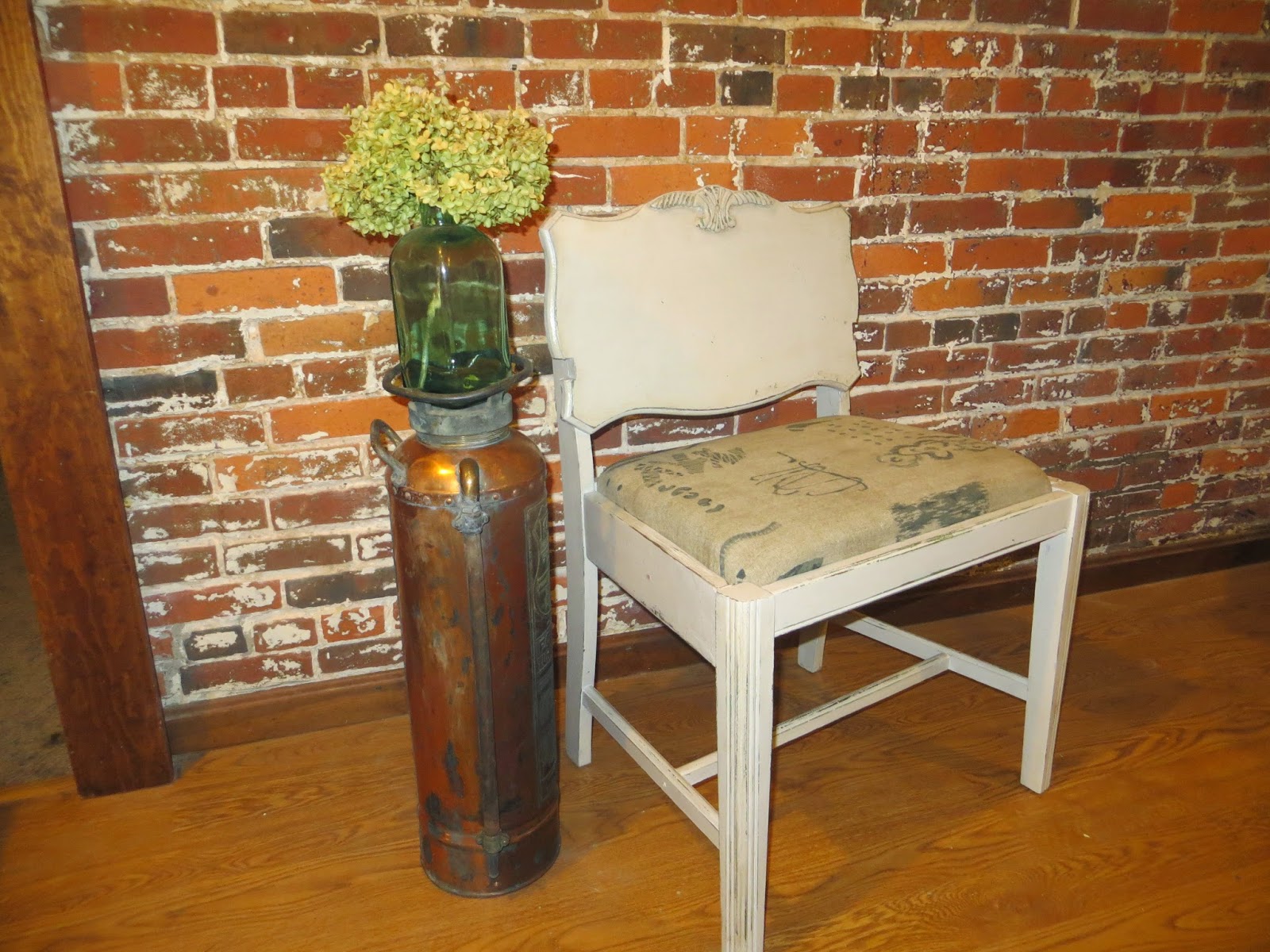 I have been frugal my entire life. Since birth, circumstances meant hand-me-downs, always sharing, no waste, making things from scratch, reusing, scavenging, making do.... One can embrace that life and call it grace, or ever after have the feeling they have been deprived.

Raising the kids after my husband died, when it came time for a clothes shopping trip, two rules were always in place. In order to purchase something, it had to: 1) fit two or more people. 2) everyone got their own underwear. I called it "Nurturing through deprivation." (Of necessity)

This bench is no different. The paints used were given to me, as was the bench. The tools were gifts or loaned. Materials all came from 'stash on hand'. Cost to produce, under a penny. Gratification in saving a broken bench from the landfill? Unimaginable.
~.~.~.~.~

Linking up at Stephanie Lynn's Under the Table and Dreaming