This past week has been a 'week of miracles'. Something like in the game of Go Fish-"get what you asked for, get to pick again." And if you are asking, you might as well "ask BIG". By definition a miracle is "a surprising and welcome event that is not explicable by natural or scientific laws and is therefore considered to be the work of a divine agency."

I am always expecting miracles. If you throw it out there with a wide enough voice, and the faith that it will be fulfilled, maybe that isn't a miracle at all.  Maybe, it's about the noisy wheel.  I'd like that on my tombstone, "she was an insanely, noisy wheel!"

If I were counting on my fingers, there was the garage door miracle, The Josie Miracle [NEW: KEEP SENDING YOUR FAITH FILLED PRAYERS. JOSIE WILL BE HEADING OVER TO JOHNS HOPKINS FOR HEART SURGERY TO CLOSE UP A HOLE, AND THEN HOPEFULLY BACK TO ST. AGNES-Thank You!], the St. Joseph medal miracle, the step stool miracle, and the computer miracle. That's 5!  Sorry for hogging, but many thanks.

You already know about the garage door and Josie (she is still thriving, but is on the up and down of her journey).  Then yesterday, Therese called in search of a St. Joseph medal.  How hard should that be to find? He's the right hand guy, the foster father of Jesus; should be right next to the Crosses in a Christian book store.  Nope. Therese had called a bunch of places in Baltimore, and I called a bunch more.  Then went online in Cleveland and on the phone. Nothing. Finally, Abba, at St. John Neumann said they had ONE, with a 24" chain. I said I would be there in 20 minutes.  She said, ""We close in 15." I said, "This is for the dad of a new baby, named Josephine, who was born at 25 weeks. He has to go back to work and can't be with her at the hospital during the day, so the medal will be like keeping her close.  I'm grabbing my keys now, I will see you in 15."

The church/store is really 25 minutes away.  I know, because I used to sing in their Praise and Worship choir and pushed it to get there on time every Sunday, and that was when there was no traffic. School started the other day in North Royalton and Strongsville, and I was going through both cities at bus time. Plus, the usual huge shopping complex stop lights that are a waste of time for those that never buy things 'new'.

I got there at 3:00, exactly, and I didn't speed. I just prayed for green lights. The CLOSED sign was already up, but the door was unlocked. She was happy to sell me the medal and chain and said it worked out good for both of us, because she said it was a slow day.  She said normally she has to leave right at 3 for doctor's appointments, but none was scheduled for yesterday. [Get what you asked for, get to pick again.]

For several weeks now I have been working on a step stool junior chair for a little girl, named Alex.  When I first saw it I thought it was hopeless.  It was about 50 years old and rusty, and missing screws, and leg caps, and held together with duct tape. I said I would make it look new, but my smart thinking head, the one that always wonders why I can't say "no", was thinking, "it would be convenient for you to die now, so you don't let this little girl down, because there is "NO WAY" this stool will ever look new." Well, miracle #4 is almost completed. I just got home from the fabric store, and as soon as the paint is dry, I will be upholstering the seat and back.  I will show you pictures and tell the 'rest of the story' in tomorrow's post, but I'll give you a teaser photo today, so you know the dilemma my smart thinking head was in. 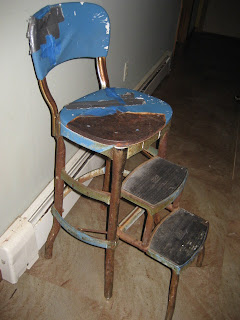 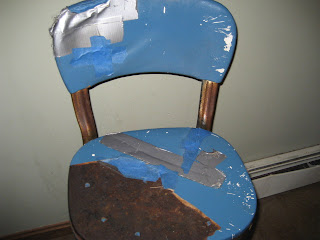 You already know what Miracle #5 is, if you just looked at the above pictures!  My computer is working! I have tried to boot the thing 10 times in the past week. I texted and called Pete.  He's not due here anytime soon.  I am not a technical person. Seriously. At all. But here I was, typing away on my auxiliary computer, the one with no sound, no mouse, no copy and paste, hardly any screen, and more negatives that I can't complain about too loudly or it won't want to be my back-up any more, when I wistfully looked my real computer, and it started.  IT STARTED.  I wasn't even touching it-just looking at it.  Sometimes it will fire up when I do touch it, but within minutes, before Google Chrome even appears, it goes back to its comatose state.  This is hours later, I've left the house and come back, I put another coat of poly on a bench I'm working on and, still, it's working. Miracles are probably really about gratitude. And I am.  Gratitudinous.

I will be posting like crazy the next few days, so don't think it's a repeat if hope&salvage shows up in your inbox.  I have so much to show you.  Feel free to comment (to me) if you have a thought about something I'm working on.  I hope this blog is a mutual communication, not just me being the 'noisy wheel'.