If you are looking for pictures in this post-there probably won't be any. Okay, maybe one. But, don't expect it.

A couple years ago, I took a couple of family members on vacation to Ocean City, in one of my favorite vehicles of all time. It was a 1999 GMC Safari Van. Silver. When I bought it, it was replacing a similarly loved van. I only drive vans. It was without a doubt, the crammed full, 'holdingist' vehicle I ever saw.  One time I borrowed 150 resin chairs for a backyard Italian rehearsal dinner, and for a luau a month later. With the seats taken out, I could get 90 chairs in at one time. Ninety. If I found a banquet of curb-finds while driving along, no need to come back later, or just graze on the appetizer chairs-I could fit it ALL in. The only van better for packing was my 1978 Dodge Sportsman SE, that one time Neil packed with 6 people, 4 bikes, coolers, camping gear and bags, and with no obstructed back view. But that is a post for another time, called "Read the Tide Schedule, you damn tourist".

This particular trip was say, July, 2008. The van had over 200k miles on it and was 9 years old. I'm not sure how many years you should get out of an American vehicle, but when I left the driveway, I was expecting to come home with it. I didn't.

When we go to the ocean, we take the kitchen sick, no sense packing light. I think there were 8 people in the van, but right now I can't totally account for all of them. A couple of adults, but mostly kids under 14. Long about I 70 heading south in Maryland, the van blew up. As in LOUD BANG, smoke coming out of the engine and gliding/careening to a stop on the berm. Right before a blockade that said Road Construction Ahead. No human casualties. The engine would not start and the kids that had been paying attention said that something fell off the van a-ways back.  I checked my phone. Two bars. I could never own a vehicle and not have Triple A, so naturally my first call was to them-they were always helpful in the past. Then, today came along. The person who answered was a woman, no discern-able accent. Although, asking where she was located may have shortcutted the process. Hindsight. Her first question was, "Where are you, where is your nearest mile marker?" That's where the trouble started.

"I'm heading south on I 70, in Maryland. I am adjacent to a giant stone structure that on one side says, 'Washington County Welcomes You', and on the other side says, 'Frederick County Welcomes You.'  It is a divided road, there is Road Construction ahead, and in my rear view mirror, I can see a huge covered walkway that says, 'Appalachian Trail'".

"But, what is your Mile Marker?" the nice woman replied.

"I don't know. I am on the I 70, in Maryland, heading south, I am adjacent to a giant stone structure that on one side says, 'Washington County Welcomes You', and on the other side says, 'Frederick County Welcomes You.'  It is a divided road, there is Road Construction ahead, and in my rear view mirror, I can see a huge covered walkway that says, 'Appalachian Trail'.  The speed limit is 65, cars are going 85, the temperature is 95, and I have a bunch of kids in my car under 15, that I cannot possibly let wander down the highway seeking this information."

"But, what is your Mile Marker?" the irritating woman asked again, not sensing the ire in my voice.

"Apparently, you are not understanding, My van just BLEW UP.  I am on the I 70, in Maryland, heading south and I am right friggen' next to a giant stone structure that on one side says, 'Washington County Welcomes You', and on the other side says, 'Frederick County Welcomes You.'  It is a divided road. The sign says there is Road Construction ahead, and in my rear view mirror, I can see a huge covered walkway that says, 'Appalachian Trail'.  The speed limit is 65, cars are going 85, the temperature is pushing a hundred, and I have a bunch of kids in my car under 15, that if I let wander down the highway seeking this information, I will be put in jail for child abuse/neglect."

"In order to help you, I must know which mile marker you are nearest!"

"I am telling you, in the plainest of terms, where I am. Please listen. My silver, 1999 GMC Safari Van, with Dutch back doors, has died in front of a Road Construction Ahead sign, on the berm of the road, on the I, SEVEN ZERO, in Maryland, heading south. If the giant stone structure that on one side says, 'Washington County Welcomes You', and on the other side says, 'Frederick County Welcomes You.' were any closer, it would be IN MY VEHICLE!  The road is divided, in fact, there is a turn-around next to it that would be very convenient for the tow truck driver. As I look in my rear view mirror, I can see high over the roadway, a covered walkway that says, 'Appalachian Trail'.  I know of NO OTHER LOCATION IN THE COUNTRY THAT IS AS I DESCRIBE. Cars and trucks are whizzing past me at 85, so much so that the van is shaking, the temperature is pushing a hundred,and inside, it is beyond that, because, as my car has died, I am unable to roll down the windows, and, because I am talking to an idiot, and positively steaming, PLUS, I have a BUNCH OF SCREAMING KIDS IN MY VEHICLE UNDER 15. NO ONE is available to wander down the highway and get this information."

I could go on for pages re-creating this conversation which is forever etched in my head.  It lasted 45 minutes, until my brother-in-law, Jack, (always my savior), reached on the only other cell phone in the van, could empty his van and drive to meet us. Incidentally, I was still talking to the AAA woman when he pulled up, and he drove to get her mile marker information.  When telling him directions on how to find us, I simply said, "We were on the I 70, heading south, adjacent to the stone structure that on one side reads, 'Washington County Welcomes You, and on the other, read, "Frederick County Welcomes You". In my rear view mirror, I can see the overhead walkway for the 'Appalachian Trail'."

The reason I post this today is not because Bethany (the other adult in the van with a cell phone) is on a vacation in OC without me, it is because daily, this conversation is repeated in a million other ways by people who don't, or choose not, to C O M M U N I C A T E.

My college major was Communications. Certainly not a good choice if one expects to earn a living, but the side benefits are that you can read people, understand their nuances, and in turn, let them know what you are thinking. No one could ever describe me as 'subtle'. I am as subtle as the 'H' bomb. So when I verbalize something, there are 'no surprises'.  Even in my absence of words, my meaning is CLEAR.

This past week, there have been some instances where miss-communication reigned. I am not big on that, because, frankly, I think I'm closer to dying at my Dad's age, (66), than my Mom's at 83.  As Bonnie Raitt says, "Life is more precious, when there's less of it to waste." And, I want to be heard!

I have discovered about myself that perhaps I am impatient. I want folks to grasp concepts that are probably beyond their pay grade and comprehension. I no longer find it fun to color with crayons, within the lines. When neighbor kids throw rocks at my house, and ring the door bell and run away-I don't see the entertainment in that; and I holler back. Maybe, I have always been the "Holler-back Girl". After I'm gone, my kids will find essays, or letters I've sent, searching for explanations, or remedies; offering mine, and being ignored. Today, it bothers me, maybe tomorrow it won't.

I said I wasn't going to include a photo in today's post. Technically, this should have been yesterday's post. At least this part of it.  Yesterday, was daughter, Alisa's birthday. Her sister, Bethany, thanked me for having her. I thank God everyday for the same thing. She is a marvelous creature. She is smart, beautiful, way funnier than I could ever hope to be. She is a great mother and friend. She gives people chances way beyond their power to earn them.  Her job is healing the sick.  And, making you believe that wellness is a matter of mind..."Get busy living, or get busy dying." She runs for health, and cooks and pedals for causes.  Anyhow, Alisa, sorry to have been in such a funk.  Hope you had a grand and beautiful day. I love you, Mom 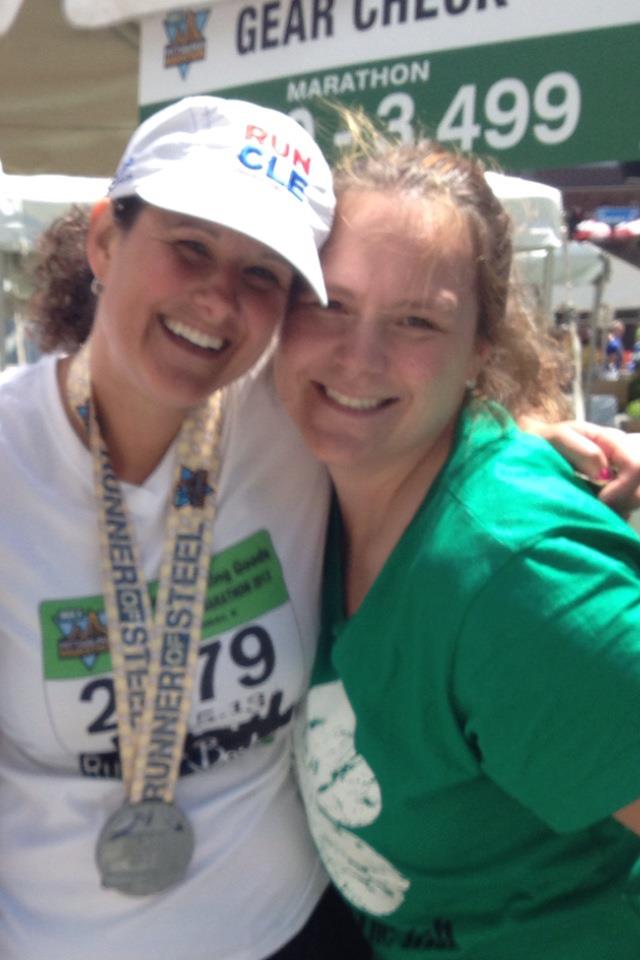