For the love of lath

A few years ago when I was making the six week, daily trip to the hospital for radiation, I found out about a house in Cleveland Heights that was scheduled for the wrecker's ball in few days. The builder, needed to gut the mansion in a short time and build a much larger house on that and the neighboring lot.

People don't have large families any-more (except us), so why they would need a house larger than 7 bedrooms, 5 bathrooms, with marble sinks and claw-foot tubs, a dumb-waiter, several formal rooms and a library, an oak paneled office, crystal chandeliers, a sweeping 3 story staircase and balcony, a mammoth kitchen with a butler's pantry, and wrap around sitting porches, was foreign to me. [In defense of the builder; he contacted several architectural salvage places who wanted him to pay for the removal of items that they in turn would sell for profit (?)]

I had only an afternoon in 87 degree temperature to salvage as much as I could, get it down 3 flights of stairs and into my van. While limping. From a meniscus tear. If I had a good video camera the scene could have made a great Survivor audition tape. 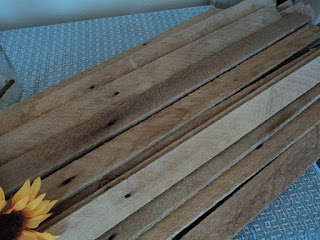 [Cleaned wood lath photo-borrowed from the internet. For my purposes, I clean as I go]


Among the items I salvaged were about a hundred board feet of wide, yellow pine baseboard and door trim, oak paneling, leaded windows, old brass hardware, hand built cabinets, curving handrails, and a mother-lode of plaster lath boards. People that are on game shows like Supermarket Grab would certainly question my strategy in choosing the items I did. I could almost hear ghost voices screaming, "head for the meat aisle". But I was only one, tired, charred, overheated woman, sans the proper tools that would make this adventure profitable.

In the end, I used a razor-blade to cut a continuous bias roping out of an old t-shirt, and tied all the lath into a bundle and lowered it down the center opening of the staircase. Even though the stairs would be in splinters in two days, I would not be the one to mar them by rolling it down. I collapsed in my van seat and poured sun heated water over my head and shirt and turned on my air-conditioning praying for an hour's worth of freon.

My body was too wounded to return for a final run the next day. I had to savor
my one-day winnings, knowing that my booty would be used sparingly. That old discarded wood meant more to me than a drawer full of sparkly things or shiny new wheels. I was in Wood Heaven.

Some of my recent projects: A gift, on a rainy day, from a sister of a friend of a friend. 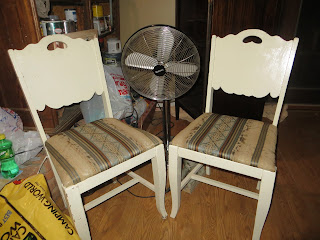 A little paint, some sanding, foam padding and some herringbone tweed fabric... 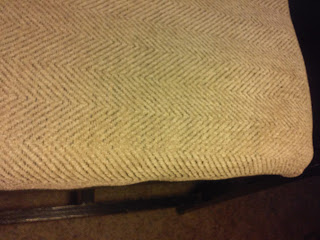 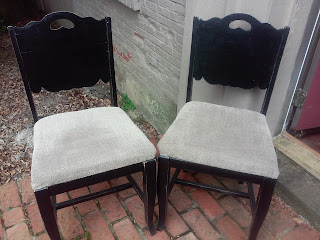 Now, two of the most comfortable seats in the house. 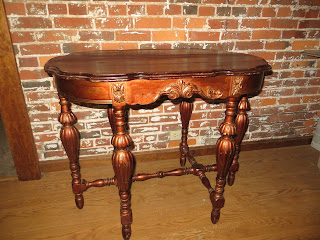 This almost Jacobean table was part of the rainy day plunder. I came home with beds and tables and chairs and so much more. It felt as though I were swimming in chocolate and my mouth was already full. But, when there's chocolate.... 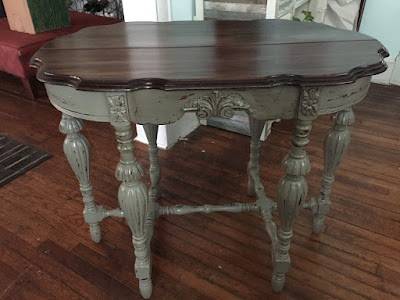 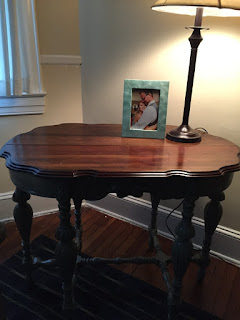 ....you take it and eat; and like a squirrel, store the rest for later. This table has since taken up residence at niece Meredith's house.

This is about the 6th table I've redone with this symmetry. I hesitated to buy it although it is specifically what I went to the Craigslist ad house for. There were toddlers in saggy diapers and I hoped that the funds would go for some replacements.

[Let me just say right here that the spell check program I am using contradicts my every other word choice. It wants me to spell neighbor as neighbour, savor as savour, color as colour. I fully expected it to encourage the use of nappies instead of diapers which it did not recognize at all. Perhaps it is the Canadian version.] 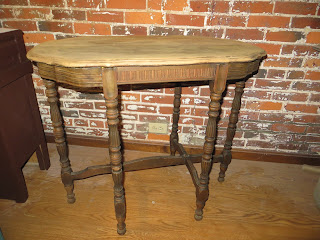 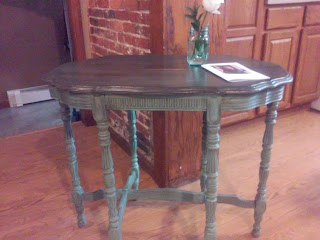 What a difference, the top photo was taken with a camera.  [note that is not just regular dust on the floor, but sawdust!] In the crummy cell phone photo, the dust barely shows but focus, tone and resolution are non-existent. 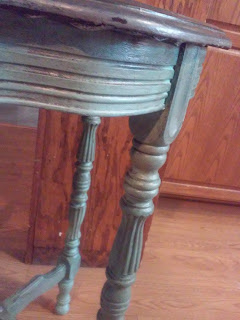 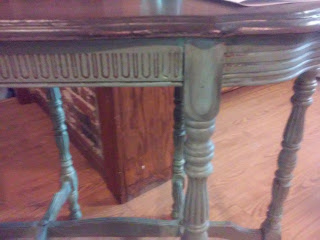 I love the blending of colors to get the right ageing effect. 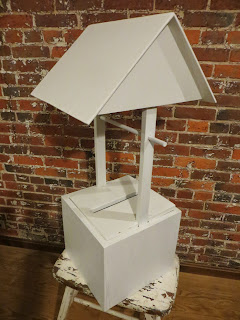 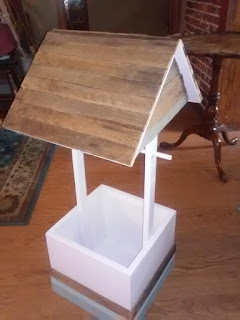 This wishing well is in process. I don't know what to do with it. It would be useful for a wedding or event, but seems over-large as to occupy a spot on a gift table. Even with the added wood lath, it is not improved. 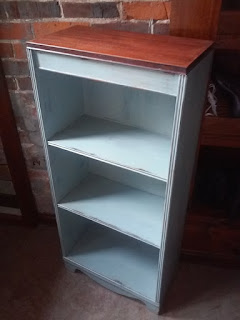 No before photo. Just know it was peeling dark wood and missing wood trim. It is gussied up and awaiting a kids bedroom. 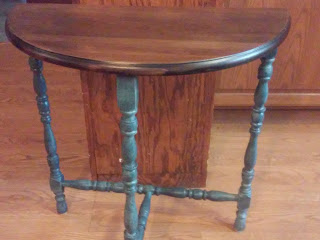 This tiny table has no before shot either. It just begged to come home with me, was light enough to carry, and forgiving of every color I added. 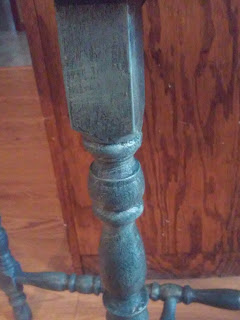 Which brings me to more lath. This piece was missing the glass top, so I cut some Habitat wood and bolstered the bottom, then sanded, painted and poly'd painted lath boards to make it the perfect accoutrement to a beach themed room. 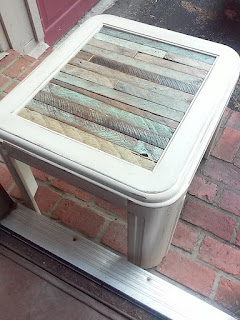 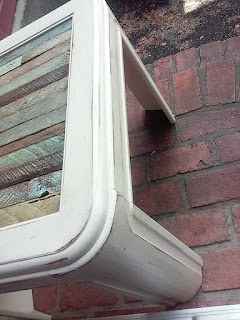 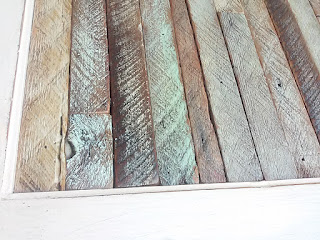 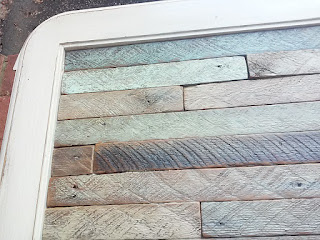 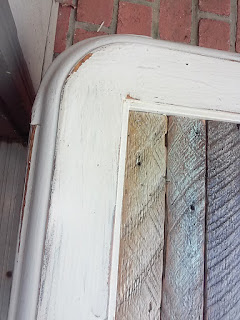 I know. Too much. But you have to go where your heart is.

Update on our tiny niece Josie, who was born 3 years ago this August weighing 1# 9oz., and 8.5" long. Holding her here is brother, Luke. 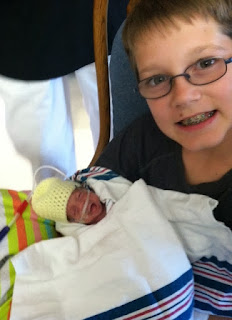 And, NOW, Miss Josie is the rugged, poster girl for a healthy child. We are shouting out and celebrating all of our answered prayers! Josie is Meredith's niece. 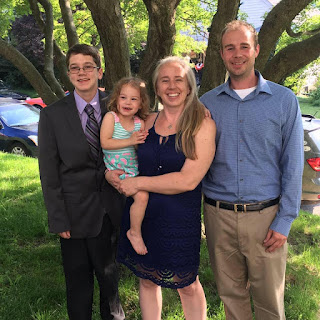 I've loaded up on books on tape from the library. My saws are sharpened and batteries plugged in. Tomorrow starts my marathon "get back on the horse" mode. See you next week.

Email ThisBlogThis!Share to TwitterShare to FacebookShare to Pinterest
Labels: About, Before and After, Favorites
Newer Posts Older Posts Home
Subscribe to: Posts (Atom)