Daughter-in-law Angie, who broke her fibula on black ice, last week while bike riding with the family, had given me an old stereo cabinet that the neighbors were tossing out. The cabinet had a glass front, removable shelves and no backing. I thought it had possibilities to become a portable linen cabinet. It took me almost a year to shove it from room to room, deciding what color to paint it. This was the original look: 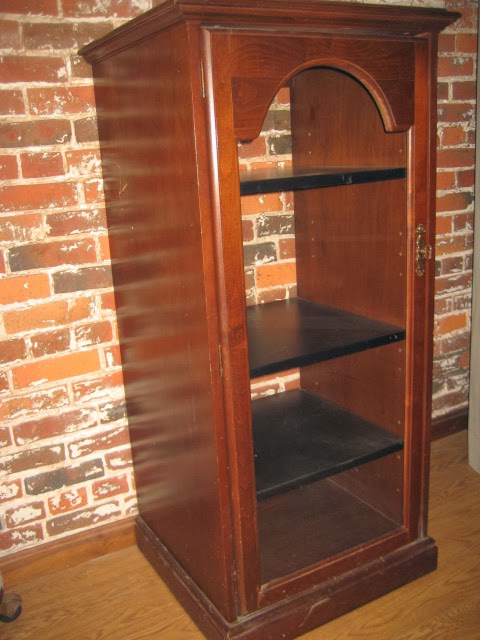 I knew the rich brown tone would be an advantage when distressing the piece. 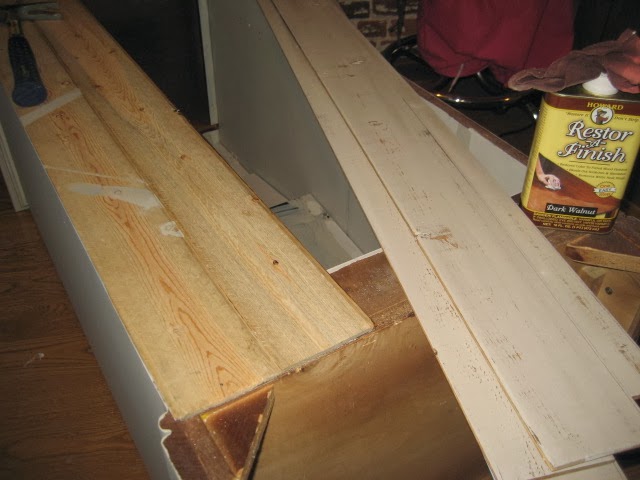 A few years ago, I picked up several bundles of single beadboard for $6 at ReStore. The tongue and groove made the back easy to assemble. I gave it a quick stain so the interior would match the outside after I painted it. The color has no name as I was using a couple of combined Oops paints. 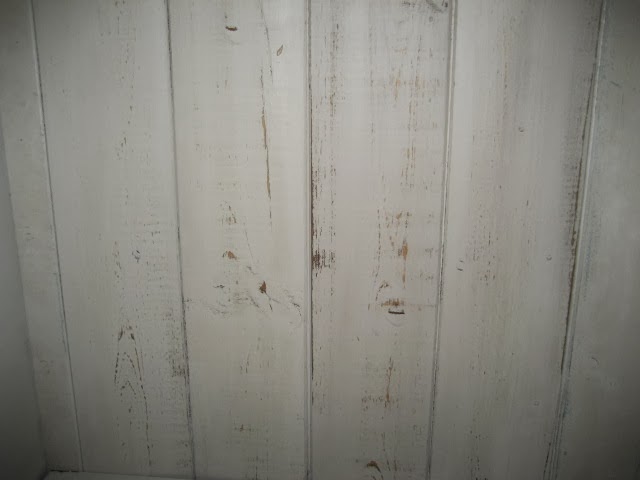 A view of the finished inside. 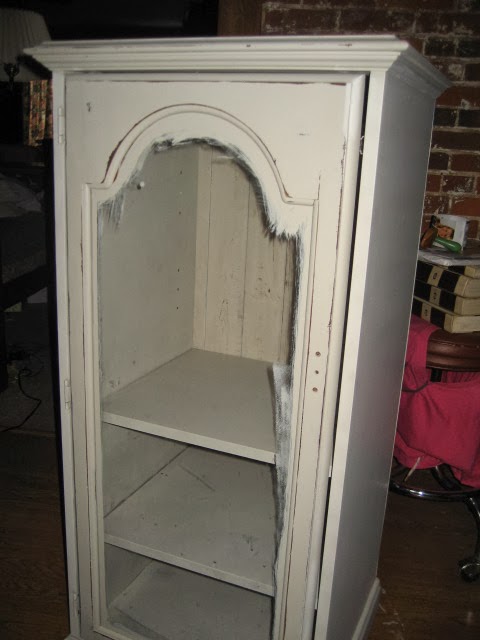 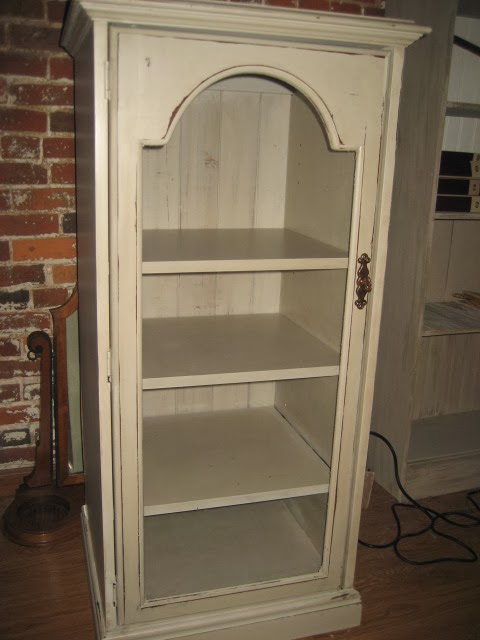 THEN, I went off the reservation. I can say that and be politically correct, because I am like 1/32 Native American on my mother's side. That, and Irish. [You will be hearing from the Irish side soon]

I had fully intended to etch the word LINENS, plus some opaque designs into the glass. I surely watched enough less than interesting You Tube videos on how to do it. A trip to the big box store did not produce the etching cream, and I did not feel like driving anywhere else in the ice, so back-tracked to a "4 the Love of Wood" blog I remembered where Kristy took an old cabinet and made new doors for it, painting the word APOTHECARY on the glass. It looks fabulous. Co-incidentally, she she re-posted that column this week. It can be seen here.  http://4theloveofwood.blogspot.ca/2012/06/not-just-any-word-will-do-how-to.html 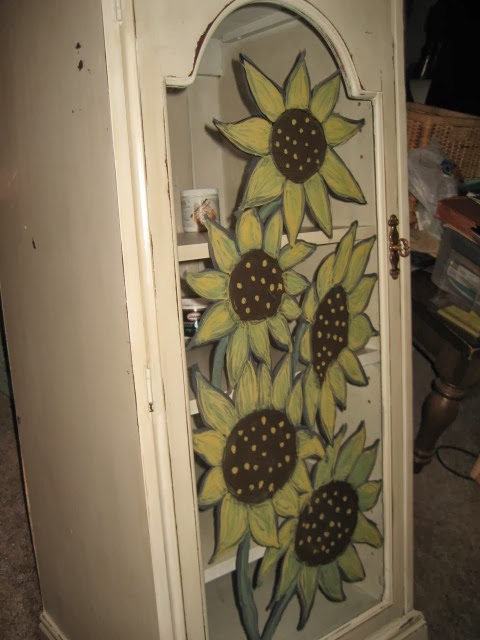 This is where the Go Big or Go Home bit comes in. I thought I could invoke some high school art classes and produce sort of a Van Gogh's Sunflowers Revisited. Pretty much a FAIL. Unless someone out there says, "Oh, that is just what I am looking for..." I painted the flowers from the inside, but had to paint them in reverse as to how they would be seen through the glass. That meant the seeds had to be painted first, and then layer on the rest. Finally, I painted over top of all the glass, so there would be no see-through parts. 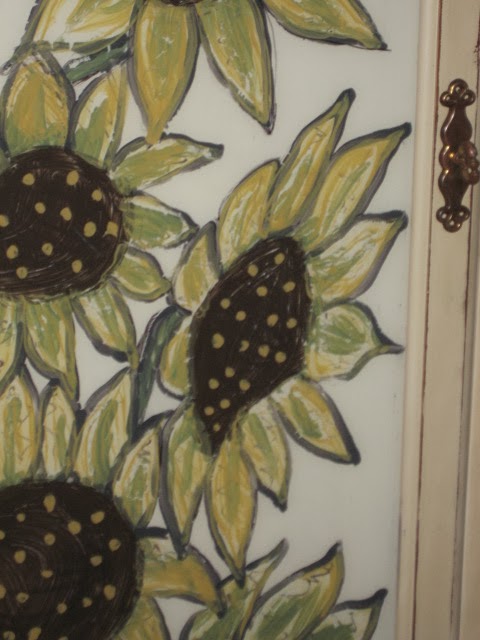 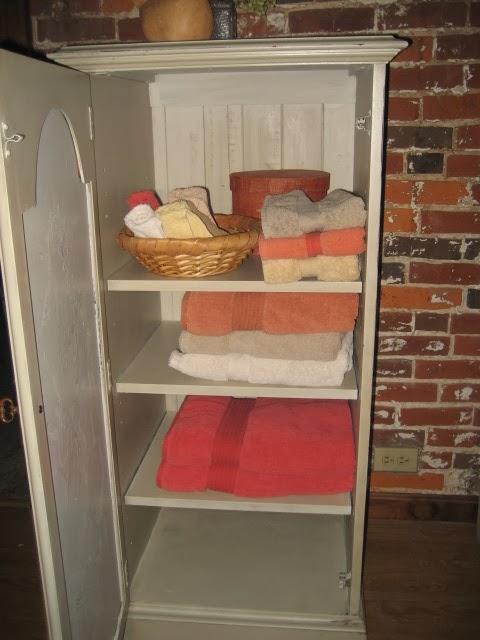 Plenty of space for towels and toilet paper. 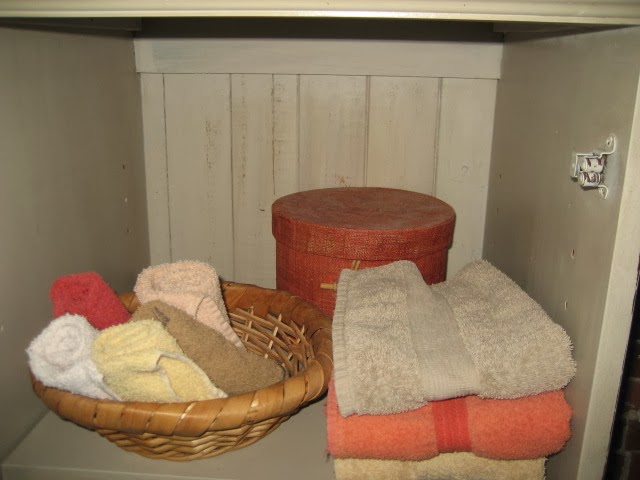 I am not a matchy-matchy person, so I was going to "phone-a-friend" to borrow some nice ones, but decided to keep it real. 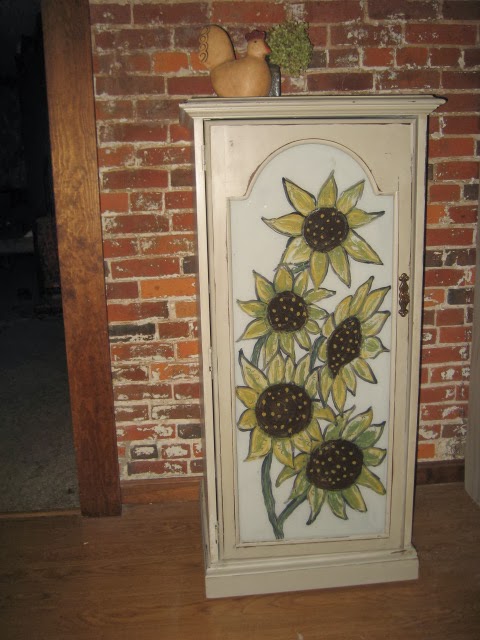 A finished photo (for now). I may still get my razor blade out and de-flower the cabinet.
By the way, Angie survived the week up north with 'helpful' relative visits, and will be going back home to C'bus with the kidlets and her crutches awaiting news of healing progress. I soooo have empathy for her.
(no bathroom on the first floor)!

As for the cabinet, I tried to Go Big, but in retrospect,  I should have just Gone Home.

I will post about my Irish pins in the next day or two. Can mail out of state in time for St. Paddy's Day.