And the boys played on... 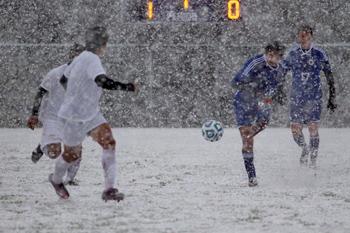 Last night I sat through an an amazing athletic performance. The Rocky River Boys Soccer Team played against an orange team in one of the post season games to get to state.  I won't name the team as they played an embarrassing game in both skill and sportsmanship. They were carded MANY times for pushing, and a RED card for spitting. In retrospect, hopefully they will mull over their play, and better themselves in the future.

When I left home loaded up with several blankets, plastic, and hazelnut hot chocolate, it was raining, but knew unless there was lightning, the game would go on. The temperature was a balmy 41, and I thought it warmer than the bitter 38 and windy at the previous Saturday game.

In the middle of the game it started snowing, a hard pitted snow that eventually lead to large pea-sized hail, and yet, the boys played on.

I wish I had known my camera was in my now soggy purse, because an actual photo would do the boys their true measure of justice. [I borrowed this from the net of a generic team (Amherst) and it will suffice until I get a true picture. I have many inquiries out for an existence of one]

There was a chorus of 50 or so, mostly seniors that stood in the bleachers the entire game and acted as the cheering section; even launching into Christmas Carols when the weather changed. The rest of the bleachers were well represented with parents, grandparents, and siblings.

The final score was 4-0, and the River team advances to play Bay Village on Saturday in the semi-finals. They will do great. The boys have a camaraderie of spirit and well practiced skills that have served them well. Although there are some standouts on the team, they share in the glory and pass to each other in what my 'novice-ness' would call the "little game".

I couldn't help but think that my husband would have been very proud and pleased to see the fine boy that our progeny produced. Liam Duncan-here's to you! 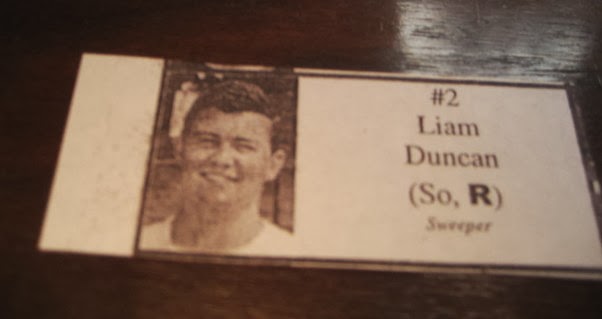